A devadasi, a woman dedicated to a temple, may have been glorified as a slave of the gods, but she was actually a prostitute. Many parts of India had these women as an integral part of Hindu temples. They were kept there to pander to the carnal desires of both the priests and the rich who visited these temples on the pretext of a pilgrimage. These women drew people to these temples, which became increasingly popular. Puri’s Jagannath temple, Gujarat’s Somnath temple and even temples in Tamil Nadu had these women.

In March, a newspaper report said that the last devadasi, Sashimoni, attached to Jagannath temple had died, bringing the curtain down on the disgraceful institution.

Francois Bernier (1620-1688) was a French physician and traveller. His account of travels in Mughal India is considered a very valuable source for history of the period. He was the personal physician to Prince Dara Shikoh, the eldest son of Shah Jahan, and after Dara Shikoh’s fall, he remained attached to the court of the emperor Aurangzeb for more than a decade. He had visited Puri. According to Bernier, every year prior to the Ratha Jatra in Puri, Jagannath took a new, young wife. She used to be deflowered on the first night by one of the temple priests in the name of consummating the marriage. In March, 1912, Bal Krishna Sahay, representing Chotanagpur Division in the Bengal Legislative Council, brought up the “custom of dedicating female children to the temple of Jagannath in Puri who when grown up, lead immoral life”. He demanded government intervention “to abolish the immoral custom” (Proceedings of the Bengal Legislative Council, Vol XXXIV). The response was typical of the colonial government. The government, the Council was told, “would view with favour and lend its support to any organized attempt made by Hindu society at large to eradicate the evils which have grown up around the system at Puri”. The British rulers flatly refused to initiate “reforms on its own motion in a matter so closely connected with religious observance”.

In a dispatch to The New York Tribune, 8 August 1853, Karl Marx had charged the British saying, “did they not, in order, to make money out of the pilgrims streaming to the temples of Orissa and Bengal, take up the trade in murder and prostitution perpetrated in temple of Juggernaut?” (Marx & Engels, Selected Works, Vol. I) It was not an insinuation. It was admonition based on facts. Seventy-four years later, in 1927, Mohandas Karamchand Gandhi, made the same point. “There are, I am sorry to say, many temples in our midst in the country, which are no better than brothels.” (Young India, 6 October 1927). On 15 September 1927 The Hindu quoted him as saying, “In calling them devadasis we insult the God Himself under the sacred name of religion and we commit double crime in that we use these sisters of ours to serve our lust…”

Karl Marx was not alone in exposing these temple vices. In 19th century, brothels were thriving around the Tarakeswar temple in Hooghly (now West Bengal). The prosperous shrine’s mahant Madhav Chandra Giri was notorious for kidnapping, seducing or procuring innocent women by deploying his musclemen. “Afterwards these women could not return to their families: their only sanctuary lay in the growing brothels of Tarakeswar. Newspapers in 1873 were full of lurid description of the temple pandas of Puri and Tarakeswar … Tarakeswar has been a place for illicit assignation,” wrote Tanika Sarkar in Hindu Wife, Hindu Nation: Community, Religion, and Cultural Nationalism. The census report of 1871 shows that this district had the second largest number of prostitutes, next only to 24-Parganas, in Assam, Bihar and Orissa and Bengal.

Rich and wealthy landlords of Bengal, Bihar and Orissa flocked to Puri with intentions not so pious. Some of the zamindars levied illegal imposts or abwabs (like hatbhara mahaprasad and barunisnan) to defray expenses for their visits to Puri that would last two-three months and cost lakhs of rupees. John Beams, the highly esteemed district collector of Balasore, Orissa, reported this to the Bengal government in 1871.

In his Unhappy India ( 1927), the stalwart of freedom struggles, Lala Lajpat Rai, laboured painstakingly to find out how syphilis reached India. Syphilis was not endemic in the region. Quoting a contemporary medical authority Dr Awan Bloch, Lala wrote, “Syphilis was first introduced into Spain in 1494 and 1495 by the crew of Columbus who brought from Central America, and more especially from island Hyati, from Spain it was carried by the army of Charles VII to Italy, where it assumed an epidemic form; and after the army was disbanded the disease was transported by the soldiers to the other countries of Europe and was also soon taken by the Portuguese to the Far East, to India, China and Japan.” In his seminal work, The Dravidian Element in Indian Culture, Gilbert Slater showed how priests of 12 great temples filled with devadasis, in Kumbakonam, a town 300 kilometres south of Madras, critically infected their wives with syphilis.

This shows that the disease had found its “patrons” in the upper-caste elites who had access to the temples. Even today, temples are out of bounds for people from the lower castes.

But how did the British get access to the temple prostitutes? William Ward, a Serampore-based missionary, had focused on this little-known aspect of cultural history. He writes in History, Literature and Mythology of the Hindoos, Vol. II: “In Conjeevaram, the Shiva Temple was in ruins and the people did not care to repair. An English official induced the [East India] Company to carry out repairs and himself gave a gift to the temple.” This must have earned the loudest admiration for the Company, yielding access for its officials to the sanctum sanctorum of Hindu temples. In the early days of the Company, the officials did not accompany their wives to India, so they turned to the devadasis for sexual gratification. The temple priests and British officials shared the same women, so the priests took the disease home and infected their wives.

In 1803, after Orissa was conquered, the priests of Jagannath temple handed over its management to the British. As per the terms of transfer, salaries of the priests and others, including the devadasis, dependent on the shrine were paid out of temple coffers by the Company till 1841, when the Company withdrew from management of the Hindu shrine. The pilgrims visiting Puri were charged an entry tax varying from Rs 2 to Rs 10 per head. A Bengali journal (Brajendranath Bandopadhyay, Sambadpatre Sekaler Katha, Vol. II) disclosed in 1831 that in 17 years the revenue officials had collected a sum of Rs 992,050 (that is, Rs 58,355 per annum) from the pilgrims.

On 16 December 1997, Sashimoni and Parashmoni, both devadasis (called maharis in Oriya) gave a public dance performance in Calcutta under the auspices of Odissi Vision & Movement Centre. A media report (Baijayanti Ray, “Brides of The Lord”, The Asian Age, 17 December 1997, Calcutta) quoted them as claiming, “We were born into high class Kayasth families from where maharis adopted us with intention of training us [to be] like them.”

The exploitation in the name of gods continues. In south Indian states, young Scheduled-Caste girls serve as prostitutes for dominant community members. In 2007, Anti-Slavery International published a study on the practice of ritual sexual slavery or forced religious “marriage”. It found that 93 per cent of yoginis or devadasis were from the Scheduled Castes and 7 per cent from the Scheduled Tribes. This is one of the ways dominant castes seek to enforce their social status and economic superiority. Girls who become devadasis and yoginis are prohibited from marrying and are stigmatized by the community. The children of yoginis suffer from discrimination because nobody admits to being their parents.

In India, discrimination is integral to the social reality. It matters little to the elites and the rulers. Threats of divine displeasure against discontinuance of the yogini system and vested interests of the powerful dominant castes may perpetuate the evil. 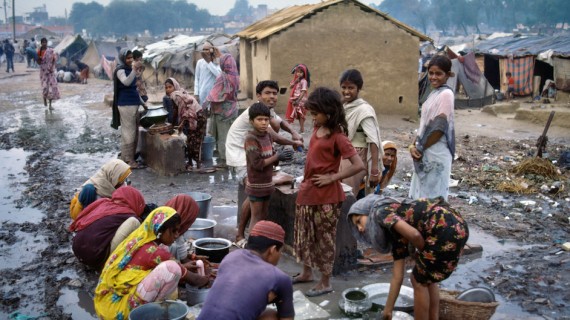 Why caste figures are being kept under wraps

The government did not release figures about castes. It only published figures pertaining to rural India. From what has been made public, it is clear that poverty is growing. One out of every three SC and ST families is landless