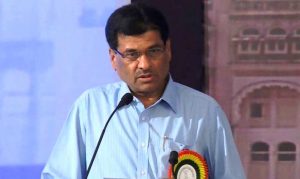 The University of Mysore administration watched in silence even as its media professor B.P. Mahesh Chandra Guru was arrested, his bail application was rejected and then he was released on bail. (read Prof Guru freed: The story of a tenacious Dalitbahujan activist). Citing legal compulsions, the university suspended him on 20 June. Talking to FORWARD Press, Prof Rangappa, the vice-chancellor of the university, had confirmed his suspension. (Read: More trouble for ‘anti-Ram’ Guru).

But was the university administration really the impartial stickler for rules it appeared to be? Not at all. When the university formalized the decision of the syndicate by issuing suspension orders of Professor Guru on 24 June, the real story emerged. Professor Guru was granted bail by the court on the same day.

Suspension continues even after bail

If rules said that he should be suspended after he went to jail, didn’t the same rules say that he should be reinstated after his release? But what happened was just the opposite. The order suspending him was issued on 24 June, the day on which he got bail, and an inquiry was also ordered against him. 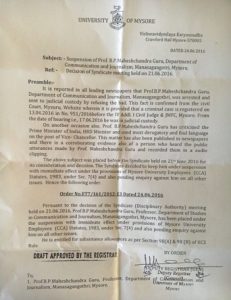 It was through this letter that Mysore University notified the suspension of Prof Guru on 24 June 2016. The reason given for his suspension is his criticism of Prime Minister Narendra Modi and Human Resource Development Minister Smriti Irani

The suspension order clearly states that Prof Guru was being suspended for “the comments he made about the prime minister of India, Narendra Modi, Human Resource Development Minister Smriti Irani and vice-chancellors of universities”. Speaking at a function, organized in connection with the suicide of Hyderabad Central University’s Dalit student Rohit Vemula, Prof Guru had described Narendra Modi and Smriti Irani as anti-Dalit and had been critical of the VCs of Hyderabad and other universities. The suspension order says that someone recorded the entire speech of Professor Guru and that the audio clip is available. However, the university did not take any action against Prof Guru for six months after the incident and it has now decided to make the comments the basis of his suspension. When FP sought the VC’s view on the issue he ducked the query, saying that the registrar of the university was a professor of law and only he would be able to comment on it.

Prof Guru described the university’s decision as vindictive. He said, “While talking of Rohit Vemula’s suicide, I had said that corrupt people enjoying political patronage were appointed as VCs. My statement had nothing to with the university I work in and thus does not constitute a breach of service (conduct) rules.” He also said that from time to time, he had been speaking against the (alleged) corrupt practices of the VC of the Mysore University. Sometime ago, a judicial inquiry was ordered against the VC. The report of the inquiry is with the university’s chancellor – the governor of the state –but no further action has been taken. Is the VC, Prof Rangappa, trying to save his own skin by taking action against Prof Guru? Could it be that by making criticism of Narendra Modi and Smriti Irani the basis of Prof Guru’s suspension, the VC is trying to appease the BJP-appointed governor of the state? Vajubhai Vala, the governor of Karnataka, had begun his public life in the RSS and before his appointment as the governor of Karnataka, he was the speaker of the Gujarat Assembly.

An obvious question is whether criticizing the policies of Modi and Irani would cost rationalists and Dalit thinkers dear even in the Congress-ruled states. FORWARD Press contacted Mallikarjun Kharge, a key Dalit politician from Karnataka and the leader of the Congress party in the Lok Sabha, to get an answer to this question. His staff told us that Kharge would get back with his opinion but he never did. Karnataka Home Minister Dr G Parameshwara’s personal secretary said that the minister was abroad. State Congress spokesperson G.C. Chandrasekhar asked for details of the issue to be sent to him on WhatsApp. This was done. He hadn’t responded till the filing of this report. The state’s chief minister Siddaramaiah is also known as a Bahujan leader (read FP profile of Siddaramaiah).