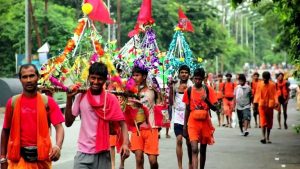 It is the month of Shrawan. Lakhs of kanwariyas are carrying kanwars (poles carried on the shoulder with pots containing water from the River Ganga hanging on either end) from Haridwar to their villages and towns. Loud chants of “bol bum, bol bum” rend the air. At one place, a group of kanwariyas is dancing to the tunes of a DJ playing at full blast. At another place, they are puffing away on ganja-stuffed cigarettes, making smoke circles in the air. One of them whistles, as a Gujarati girl passes by. Amid this cacophony, one of the kanwariyas hears a strange voice. “Inquilab zindabad; duniya ke mehnatkash ek ho” (Long live revolution; workers of the world unite).

He is astonished. And stunned. He tries to find the source of this strange voice. Who is doing this mischief and why? He glances at the faces of all the members of his group and realizes that it didn’t come from one of them. They are chanting nothing except “bol bum”. He slows down and withdraws to the back of the group to try and solve the mystery. After a little investigation he realizes that his T-shirt is the source of this weird slogan. Fear grips him. “Who is it? Who is it?” He shouts.

The reply is quick. “Young man, have no fear. I am Latin American revolutionary Che Guevara. I want to talk to you.”

Kanwariya: My name is Ravinder. I am from Hisar in Haryana. I am a BA and I am unemployed.

Che: This kanwar you are carrying, what are its advantages and disadvantages?

Che: And how much does this penance cost?

Kanwariya: Each one of us spends at least Rs5000. Lakhs are carrying kanwars and hundreds have put up camps to serve the devotees. 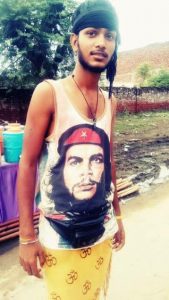 Che: My young friends, please listen carefully to what I am going to say now. This kanwar is a business, a market worth crores. The government wants the youth to keep waiting for divine intervention to solve their problems. That will never happen because no divine power exists. All this “tamasha” is the creation of the ruling class to keep the youth engaged in inane pursuits. Education, employment, medical treatment – all are in the hands of the government. It is the government – and not Lord Shiva – who decides what the fees of educational institutions will be, whether medical treatment will be costly or affordable, how many jobs will be created and so on. If these lakhs of youngsters from different parts of the country assemble and start a march to Parliament, won’t the government be forced to concede their demands regarding education, employment and health?

Just look at the history of world – or of India. People rose above considerations of caste, religion and region and fought for their rights. Wherever people replied to cruel rulers in their own language, they won their rights, they won their freedom. In your India, lakhs of youth first fought against the British government and then against the brown sahibs. You got freedom from the British and you could extract some rights from the brown sahibs. If you want to protect and preserve your rights, if you want unfettered freedom, you will have to remove the blinkers of religion restricting your vision. You will have to wage a long battle. You all youngsters will have to join the battle for water, forests and land, which is being waged from Kashmir to Kanyakumari and from the seashore of Gujarat to the hills of Manipur and Meghalaya. You should join the struggle of the toiling farmers and workers, fighting for their rights; you should join the battle of the Dalits for equality. They work the hardest but your Brahmins sitting in temples never even consider them humans. You should become a part of their battle. You should join the battle of women, who were never given any respect by this male-oriented society. You should fight to break the “iron heel” of the ruling dispensation, which is crushing the Tribals.

In my country, Cuba, we fought against imperialism and freed our people from imperialist shackles. Remember, all those who have put up camps to serve you are part of the ruling establishment. The flourishing trade of intoxicants among kanwariyas is also a conspiracy of the ruling class. They want a big chunk of people to get addicted to one type of intoxication or the other. Kanwar yatra will not take you on the path to emancipation. Only struggle will.

“Goodbye, my friend. I hope that the next time we meet, it will be on the battleground of a struggle.”

Before the kanwariya could ask the next question, he woke up with a start. 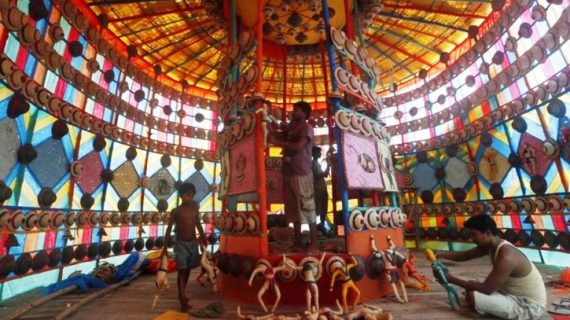