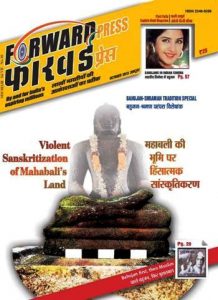 Most of the magazines and other publications aimed at the empowerment of Dalitbahujans are chock-a-block with stories, poems, novels and autobiographies. However, it must be said that whosoever has raised the issues of Dalitbahujans and Tribals through creatively in any form deserves all the respect and credit. Their works at least enable this huge exploited section to get a place in the mainstream literature and discourse. But it would not be unfair to say that such magazines only arouse disaffection. This is the both the speciality and the limitation of these publications. They stir up disaffection by talking about exploitation and oppression. And then, they leave the disaffection they have aroused back at the mercy of the compass and map of that same old epic. This, in short, is what the Dalitbahujan magazines have been largely doing. There are some other magazines that are more journalistic and less literary but ultimately, they also do the same thing – arouse disaffection. But the question is which direction should this disaffection take? Who should use it and to what end? Should politics use it? Should the new emerging proposition of religion use it? Should only Dalits use it? Should only OBCs or Tribals use it? Should women use it? And an even bigger question is whether it can be propelled in a common direction where all of them can use it without slicing it?

The last question takes us to what the monthly FORWARD Press has been doing so far. At least this is my perception: There are many divisions, many extensions but if the problems associated with them have a common source then the possible solutions should, by definition, have a common association, a mutual connection. This is pure logic. If a mechanics of exploitation based on a particular theology or a particular version of history has been used against Shudras, women, members of other religious communities, then the assault aimed at ending the exploitation should be directed at the foundations of that mechanics. How can these foundations be shaken through a common assault? For this, it would be necessary to build a new research-based union of journalism and literature that can analyze the trends and directions and use facts to bare the grand narratives. When these grand narratives are separated and presented as discrete narratives, they mislead. But when they are placed together, they clearly delineate both the past of the exploitative order and the road to emancipation.

The FORWARD Press magazine has been publishing articles that are written well and are based on original research, and seek to meet its objectives. Another welcome initiative of the magazine has been its bilingual format ­– to help prepare Dalitbahujans for the challenges of the future; to help a large number of them read, understand and speak good English, who would then be free from, in Hindi too, the fear of the language, vocabulary and aesthetics. FP tenaciously ploughed on the road it had chosen for itself. It busted many myths. No other magazine has so fiercely advocated the grand narrative referred to above as this one and that probably led to the publication of its print edition being discontinued.

Presenting in detail this emerging grand narrative – the Dalit discourse – that seeks to make the common understanding of this country’s religion, philosophy, culture and history stand on its head, is, to my mind, the most important contribution of this magazine. Whether it is Mahishasur or Ravana, bringing to the fore the culture lost in the haze of history and handing it over to its present claimants requires some courage, which other magazines or literary initiatives could never gather. And they could not have, because immersed deeply as they are in the exploitative beliefs and Ved-Vedanta and Atma-Parmatma, these writers and litterateurs could never have developed any respect for the religion or culture that recognizes Ravana and Mahisha as its heroes. Even when they think about these heroes, it is only out of curiosity. They cannot hear the cries of a lost culture; they are not excited by the prospect of its rebirth. Hence, their writings are teeming with intimidating words – a language to which a common Dalitbahujan can hardly relate. But what FORWARD Press has done is to write the script for moving towards a new religion, a new culture. The magazine has given birth to a new movement that is marching ahead to smash the myths and the structure built on mythological history. A big section of the Dalitbahujans was readying for this march. It is unfortunate that the print edition of the magazine is shutting down at this crucial juncture. Notwithstanding its inherent limitations, we can only hope that the web edition will emerge even more powerful while retaining its original inspiration and take the struggle for the emancipation of the Dalitbahujans to its logical conclusion.

Sanjay Jothe is a Ford Foundation International Fellow and a Lead India Fellow. An MA in International Development from Sussex University, UK, he is currently pursuing his PhD from TISS, Mumbai. He has been working with different organizations on issues relating to social development. While he has already published a book on Jotiba Phule, a second book is under publication. He writes research-based articles on Bahujan society and Dalit discourse for newspapers, magazines and blogs. 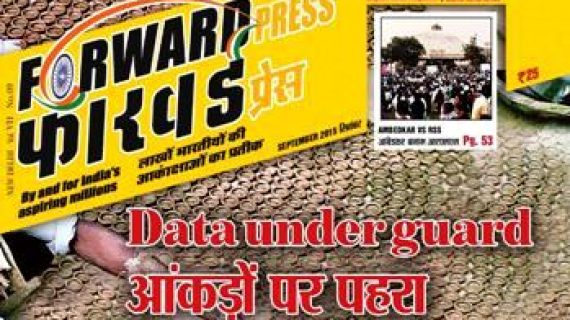