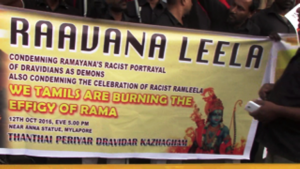 The ongoing Mahishasur movement in North India has stirred up the Dravidian subconscious in south India. This year, on the day of Dussehra, effigies of Ram, Sita and Lakshman were burnt in Chennai. Eleven Periyar supporters who dodged a large police presence to burn the effigies were arrested. These Periyarites have been demanding a ban on the practice of burning Ravan’s effigies and insulting Dravidians in Delhi and other parts of North India.

Periyar Ramasamy had written The Ramayan: A True Reading in the Sixties and created an anti-Ram consciousness in Tamil Nadu. But in the past two decades or so, this had lost steam. As part of his movement to debrahmanize culture, Periyar had even launched the campaign of hitting with shoes in public places both the scriptures that insult Dalitbahujans and idols of gods and goddesses.

On 12 October, some of this Periyarite anger resurfaced. At a well-publicized event in Chennai, activists of the Thanthai Periyar Dravidar Kazhagam (TPDK – ‘Elder Periyar Dravidian Group’) held a “Ravana Leela” to protest against the Ram Leela held in New Delhi and other parts of North India. 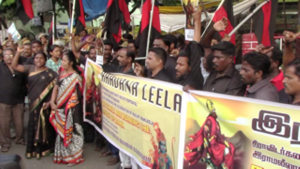 Despite the presence of about 200 policemen at the venue, the organizers said that they had succeeded in outwitting the police and had set ablaze four effigies, two of Ram, and one each of Sita and Lakshman. The time and venue had been announced previously. Eleven youths have been remanded to 15 days’ custody, and 40 others taken into detention were released a few hours later.

Since its inception, the Dravidian movement in Tamil Nadu has tried to disassociate itself from the Hinduized/Brahmanized idea of India and opposed the role of Hinduism in Tamil society.

Kumaron, one of the office-bearers of TPDK, addressed a letter to the prime minister in which he said: 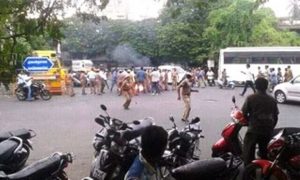 New Delhi and many cities of the northern India are going to witness one more annual festival of ashes, ie Ramleela. So, we sent a leader to prime minister, president and home minister last week with the following demands.

1) The Government of India must put an end to the practice of celebrating the festival of Ramleela, with the participation of VIPs like the president, and the prime minister, etc

2) The Government of India’s policy is secularism. As the head of the government that professes secularism, your participation in such functions, ridicules the very principles [you espouse]. With all humility yet with all firmness and determination, we would like to point out that if you fail to meet our reasonable demands, we will be forced to take steps to safeguard our honour and self-respect …

In the Ramayana we are told that Rama was helped by the monkeys in South India and Hanuman was the great hero of the monkeys. It may be that the story of the Ramayana is really a story of the fight of the Aryans against the people of the South whose leader was Ravana. Probably the “monkeys” were the dark people living in southern India.

But there has been no response to our letter. Of course there is no respect for our words and towards us. Instead of banning the event, our honourable prime minister Mr Modi participated in “Ram Leela” yesterday (11/10/2016) in Uttar Pradesh as the chief guest and gave a lecture that “it’s a day when good defeated evil”. Do the people of the South look evil to you, Mr Modi? 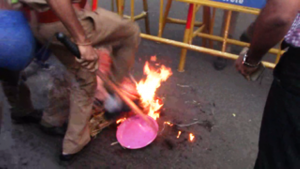 It has clearly been proven once again that the rulers of India will never care to respect the feelings of the southerners. If they cared, then they would not have burnt the effigies of the three choicest heroes of the Dravidian race in the guise of honouring a hero of religious epic. To burn Ravana and to set fire to his brother Kumbakarna and son Meganatha may be a joke to Mr Modi and his colleague Rajnath Singh. But as the Prime Minister of this country it is his duty to look into the repercussions on the people of the south, which alone can provide a meaning befitting the much-talked-about term “national integration”.

So having condemned Ramayana’s racist portrayal of the Dravidians as demons and also the celebration of the racist Ramleela, to fight against the brahmanical hegemony, we are forced to make arrangements for a parallel celebration here to counter your FESTIVITIES there. This is a rational demand based on ethnological and historical grounds.

Hence, it has challenged our self-respect, so we Thanthai Periyar Dravidar Kazhagam are constrained to organize RAVANLEELA festival in Chennai, the capital of Tamil Nadu, by burning effigies of Rama and Sita, with equal pomp and pageantry and with the patronage of the Dravidians, ie Tamil masses. 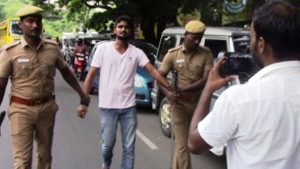 If the Indian government is not ready to ban the racist Ramleela next year we will organize Ravanleela not only in the state capital, but in each district capital and burn the effigies of Ram, Laxman and Sita.”

After the height of Periyar’s Self-Respect movement in the 1930s and 1940s in the then Madras Presidency (which included the present-day Tamil Nadu), in 1998, it was Karunanidhi, then chief minister of Tamil Nadu, who raised the issue of Ram versus Ravan and Aryan versus Dravidian. He made waves by speaking out in support of the Dravidar Kazhagam activists who had attempted a Ravan Leela on 1 October that year. Commenting on this incident, one of the well-known social scientists of Tamil Nadu, Dr M.S.S. Pandian, had said at the time: “It was a response to the way Indian nationalism was putting out certain Hinduness as the defining feature of India. The non-Brahmin movement in Tamil Nadu was not just a non-Brahmin movement, it was a movement which aligned itself with certain rationalist texts. Ramayana was all along treated by the North Indian leaders as an allegorical story of the Aryan invasion on Dravidians. So, the same allegory was taken up by the Dravidian leaders because Indian nationalism was imposing a certain vision of India based on Hindu, Hindi and Hindustan. As a response to that, Ravana got recuperated as an icon of south India. Rama was looked upon as someone who was promoting brahmanical values, though he was a non-Brahmin.” 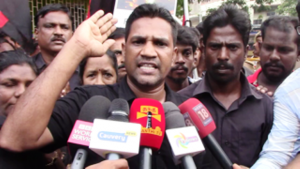 Speaking about the arrests that followed this year’s Ravan Leela, Manoj, a member of the TPDK, said, “Eleven persons were arrested and remanded for 15 days, among whom are Ganesh, Jayakumar, Bala and Selvam. Forty others were detained and released after a few hours.”

Kumaron, another office-bearer of the TPDK, said, “Ten people belonging to the Hindu group had come to oppose us but the police prevented them from getting close to us, and took them away.”

Following the successful holding of the event in Mylapore on 12 October, the organizers issued the following statement: “Every year in North India, in the name Ram Leela, the effigy of Tamil King Ravana has been burnt with a motive to bring disgrace to Dravidians. In opposition to this, Periyar Dravidar Kazhagam organized ‘Ravaanleela’ and announced the burning the effigy of Ram near Mylapore Sanskrit College. Hindu Munnani and Hindu People’s party gave a petition to the police commissioner demanding that we shouldn’t be given permission for conducting the event. But as announced on 12/10/16 Periyar Dravidar Kazhagam burnt the effigy of Raman, Lakshmanan and Sita. Police remanded 11 persons who burnt the effigy and arrested 40 people who participated in the event. This has grabbed the attention of many in the country.”

Given this development, the future of politics in Tamil Nadu, with the prolonged illness and hospitalization of the Chief Minister J. Jayalalitha, and the BJP attempting to get a toehold, having opened its account with one MP in the last general election, could be interesting. 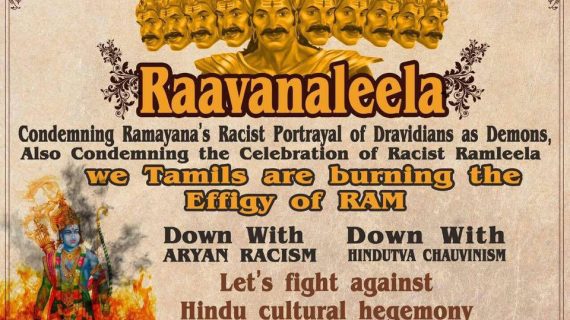 Ravan and his brothers were Dravidians, and burning their effigies in Delhi is being insensitive towards the Dravidian people, says a Periyarist group. It will now burn effigies of Ram, Sita and Lakshman