‘To conclude, while I am ambitious to advance a Theory of Caste, if it can be shown to be untenable I shall be equally willing to give it up.’ 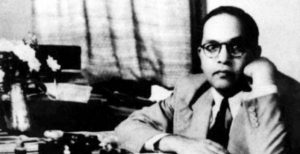 Western sociologists and anthropologists have largely viewed India as a society characterized by caste in which social hierarchy was translated into a biological, and hence cultural, idiom. Louis Dumont (1911-1998), for example, in his famous book Homo Hierachicus (1966) championed this cultural notion of hierarchy to analyze caste system in structuralist terms. On the other hand, anti-Dumont interactionist scholars like Mckim Marriott gave more emphasis to the local and regional variations in the caste hierarchy and M.N. Srinivas propounded a theory of social mobility occurring within the caste system through a process that he termed “Sanskritization”. The Marxist scholars viewed caste system as a kind of class formation. But what was most interesting in these discourses is the absence of the contributions of one of the most original thinkers on caste system in India, Dr B.R. Ambedkar (1891-1956), who was not only a scholar but also one of the greatest legislators and policymakers of independent India.

Ambedkar’s views on caste were also overlooked in the anthropology and sociology curricula in Indian universities. Ambedkar still does not figure in Indian Anthropology. The students of Anthropology, Sociology, History and Political Science in the Indian universities have to know a lot about Louis Dumont, H.H. Risely, J.H. Hutton, L.S.S. O’Malley, G.S. Ghurye, D.D. Kosambi, Nirmal Kumar Bose, Ramkrishna Mukherjee, M.N. Srinivas, Surajit Sinha, André Béteille, Rajni Kothari, Mckim Marriott, Ronald Inden, Bernard Cohn, Nicholas Dirks and Romila Thapar but not about B.R. Ambedkar! Ambedkar was treated only as a leader of the Dalits and one of the makers of the Constitution but social scientists working on India did not give him the status of a scholar in their elite discourses. None of Indian or Western anthropologists or other social scientists valued B.R. Ambedkar’s views on caste. Ambedkar remained an “Untouchable” in the brahmanical and European scholarly discourses on caste in India. 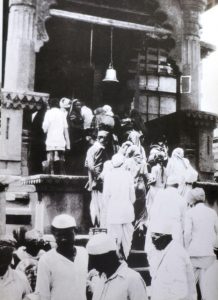 Ambedkar launched a movement at the Kalaram temple, Nashik, in 1930 to demand temple entry rights for Dalits

As early as 1916, B.R. Ambedkar made a novel attempt to explain the caste system in India in a paper he read at an Anthropology seminar that Alexander Goldenweizer (1880-1940) organized in Columbia University. Ambedkar was then 25 years old and a doctoral student of Anthropology. His paper was titled “Castes in India: Their Mechanism, Genesis and Development”. It was an 18-page paper that contained a pure, detached academic study of the nature of the caste system in India. It had no allusions to personal experiences and was free of opinions. This was a piece of critical, lucidly argued scholarship on the then existing anthropological and sociological literature on caste. In the first part of the paper, Ambedkar dealt with the works of four famous scholars – Emile Senart (1847-1928), John Nesfield (1836-1919), S.V. Ketkar (1884-1937) and H.H. Risley (1851-1911) – and, without being biased, pointed out the shortcomings in their understanding of the essential feature of the caste system. However, even while criticizing these authorities on the subject, Ambedkar did not fail to observe the positive aspects of their contributions:

To review these definitions is of great importance for our purpose. It will be noticed that taken individually the definitions of three of the writers include too much or too little: none is complete or correct by itself and all have missed the central point in the mechanism of the Caste system. Their mistake lies in trying to define caste as an isolated unit by itself, and not as a group within, and with definite relations to, the system of caste as a whole. Yet collectively all of them are complementary to one another, each one emphasising what has been obscured in the other. [Ambedkar (1917): 1979:7].

Looking at not just caste but the caste system in which each jati is part of the whole was definitely a step forward in social and cultural anthropology. Ambedkar was not ready to accept the idea that the caste system was a “division of labour” that minimized competition among occupational groups. For him, caste system was a division of the labouring classes rather than a division of labour. He observed that marriage outside one’s own immediate kin-group, or clan exogamy, was the fundamental and universal feature of human society and in India “tribal exogamy” survived through different stages of civilization, whereas in the modern world this was no longer the rule. He wrote:

With the growth of history, however, exogamy has lost its efficacy, and excepting the nearest blood-kins, there is usually no social bar restricting the field of marriage. But regarding the peoples of India the law of exogamy is a positive injunction even today. Indian society still savours of the clan system, even though there are no clans; and this can be easily seen from the law of matrimony which centres round the principle of exogamy, for it is not that Sapindas (blood-kins) cannot marry, but a marriage even between Sagotras (of the same class) is regarded as a sacrilege. [Ibid (1917): 1979:9]. 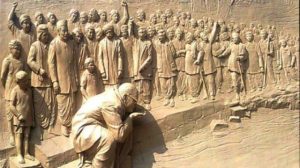 This is the logical foundation based on which Ambedkar advanced his arguments to elucidate the caste system. He cogently argued that since in India exogamy was the rule and not the exception, endogamy must have been a foreign idea. But then how could caste system, for which endogamy was a prerequisite, come into being in India? The way Ambedkar explained this anomaly is the most interesting part of his original paper:

Nothing is therefore more important for you to remember than the fact that endogamy is foreign to the people of India. The various Gotras of India are and have been exogamous: so are the other groups with totemic organization. It is no exaggeration to say that with the people of India exogamy is a creed and none dare infringe it, so much so that, in spite of the endogamy of the Castes within them, exogamy is strictly observed and that there are more rigorous penalties for violating exogamy than there are for violating endogamy. … Consequently in the final analysis creation of Castes, so far as India is concerned, means the superposition of endogamy on exogamy. [Ibid (1917): 1979:9].

Ambedkar went on to explain how some of the social groups in ancient India that were classes turned into enclosed endogamous groups probably to hold on to the privileges which they accrued from the ancient class system. According to Ambedkar, since the Brahmins and the Kshtriyas were the most privileged classes it was these classes who began to enclose themselves to secure their privileges by becoming endogamous. Later other groups also emulated the higher classes and the system spread over the wider region. So, classes in India were the forerunner to castes, and castes according to Ambedkar were enclosed classes characterized by endogamy:

We shall be well advised to recall at the outset that the Hindu society, in common with other societies, was composed of classes and the earliest known are (1) the Brahmins or the priestly class; (2) the Kshatriya, or the military class; (3) the Vaishya, or the merchant class; and (4) the Shudra, or the artisan and menial class. Particular attention has to be paid to the fact that this was essentially a class system, in which individuals, when qualified, could change their class, and therefore classes did change their personnel. At some time in the history of the Hindus, the priestly class socially detached itself from the rest of the body of people and through a closed-door policy became a caste by itself. The other classes being subject to the law of social division of labour underwent differentiation, some into large, others into very minute, groups … The question we have to answer in this connection is: Why did these sub-divisions or classes, if you please, industrial, religious or otherwise, become self-enclosed or endogamous? My answer is because the Brahmins were so. Endogamy or the closed-door system, was a fashion in the Hindu society, and as it had originated from the Brahmin caste it was whole-heartedly imitated by all the non-Brahmin sub-divisions or classes, who, in their turn, became endogamous castes. It is “the infection of imitation” that caught all these sub-divisions on their onward march of differentiation and has turned them into castes. (Ibid: 17-18). 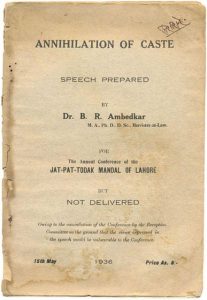 ‘Annihilation of Caste’: The speech that was never delivered

Starting with the fundamental anthropological discovery of tribal clan exogamy Ambedkar was able to show how caste endogamy was superimposed on the former. Secondly, his exposition of caste as an extreme form of class system as early as 1917 was also exemplary. However, it found no mention in the works of the world-famous scholars on caste in India. Take for example, G. S. Ghurye. In his famous book Caste and Class in India (1957), Ghurye mentioned the name of Ambedkar only once, on page 226, and that too as “the leader of the Scheduled Caste” even though the author discussed at length the importance of endogamy in characterizing India’s caste society. The same kind of omission of the anthropological contributions of B.R. Ambedkar could also be observed in the writings of Nirmal Kumar Bose.

B.R. Ambedkar (1916). “Castes in India: Their Mechanism, Genesis and Development”. Paper presented at an Anthropology seminar organized by Dr A.A. Goldenweizer in Columbia University on 9 May 1916. Text first printed in Indian Antiquary Vol XLI (May 1917) 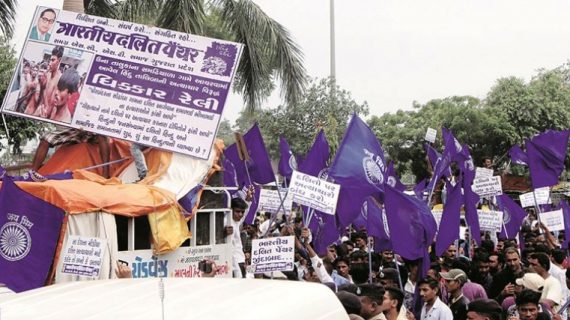 A salute to the Dalit warriors of Gujarat

There is the concept of the vanguard in Marxism – a group of people that leads in initiating social, economic or political change. The Dalit middle class is capable of playing the vanguard for the resurgence of Indian society and is competent to do so 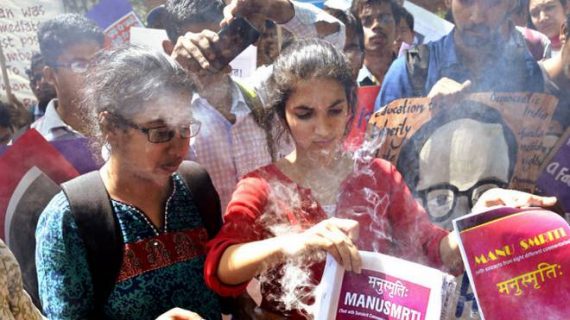