What we are witnessing today is a stifling of dissent by the ruling party and its ideology of sectarian nationalism. Dissent and expression is suppressed not only through the control of the media and the stifling of writers. Of course, by controlling a section of the media, the ruling party is using a heavy hand to control free thinkers. But most frightening have been the attempts to eliminate the thinkers and writers themselves.

Freedom of expression was the core value that accompanied the struggle for India’s Independence. The British attempted to stifle the voices of dissent but the freedom fighters knew what it would mean if they gave in. The leaders of the freedom were ready to face the wrath of British colonialist powers to secure freedom of expression, the foundation of a democratic society. This value has been enshrined in our Constitution, through its various articles and clauses.

We know that state can control the media, as happened during emergency. The authoritarian state censored the media and raided publication houses. The current situation is slightly different. Here, along with the state, those inspired by the communal nationalism are taking the law into their own hands, with full confidence that the ruling party is with them and they can get away with murdering those thinkers and activists whom they can’t oppose at ideological level.

Most of the ideologies that promote nationalism in the name of religion also promote religious intolerance, communal tensions, street violence and killing. What we are witnessing in India is matched by the developments in Bangladesh, where Islamic nationalists have been targeting bloggers and eliminating them. 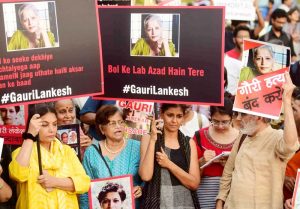 Actresses Shabana Azmi and Nandita Das lead the protests in Mumbai against the murder of Gauri Lankesh (Photo courtesy: Webdunia)

During last several years we have witnessed the murders of the writers and social activists who have been upholding rational thinking, who have been opposing the hold of caste, who have been opposing the politics in the name of Hinduism. It began with the cold-blooded murder of Narendra Dabholkar. He had been active in promoting rational thinking, and had formed Andh Shraddha Nirmula Samiti (Committee for Eradicating Superstition) in Maharashtra. They members would go from village to village and strike at the religious roots of superstition. He had received threats from Sanatan Prabhat, a paper espousing the cause of Hindutva.

Govind Pansare, a dedicated, saintly worker for human rights, was not only promoting rational thinking, but he was also opposed to sectarian nationalism. He retold the story of Shivaji, in which he was humane king, taking care of his subjects irrespective of their religion, and he had both Hindus as well as Muslims in his administration. He had also smelt a rat in the death of Hemant Karkare, who had exposed Hindutva terror especially with respect to the Malegaon blast. M.M. Kalburgi, a rationalist scholar, was opposed to the brahmanical values and promoted Basavana’s teachings of social equality. He was also for granting the status of a minority community to the Lingayats.

In the sequence came the murder of Gauri Lankesh, a fearless journalist, who opposed the politics of Hindu nationalism at the grassroots, supported the rights of religious minorities, worked towards restoring communal harmony amid the politics of hate being played around Baba Budan Giri and Idgah Maidan. She was also for recognizing Lingayats as a religious minority. These activists were perceived as a threat, for they used to write in the regional languages and have a huge impact on the masses. They were all shot dead by motorcycle-borne assailants. The investigations haven’t so far yielded much, except for the one worker of Sanatan Sanstha. 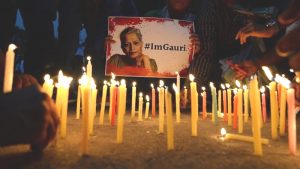 A candlelight vigil in Delhi against the murder of Gauri Lankesh

As such, these murderers are just the tip of the iceberg. These growing intolerance in society has led to assaults on and murders of Muslims and Dalits in the name of holy cow. The killings of Mohammad Akhlaq and Junaid Khan and the Una floggings come to mind. While intolerance has grown gradually in the last decade or so, there has been a perceptible change in the nature of intolerance, which is now built around the issues of the Ram temple and the cow in particular. It is this atmosphere of growing intolerance that led to the returning of awards by eminent writers, film personalities and scientists. While their ideological commitment to a society with freedom of expression was remarkable, those holding the seats of power tried to defame them.

We need to look back to understand the connection between Hindu nationalism and the intolerance, intimidation and killings. In independent India, the first major act of ideological murder was that of the father of the nation, Mahatma Gandhi. Godse was the killer and the Rashtriya Swayamsevak Sangh (RSS) was banned. Sardar Vallabhbhai Patel, then home minister, wrote: “As regards the RSS and the Hindu Mahasabha … our reports do confirm that, as a result of the activities of these two bodies, particularly the former (RSS) an atmosphere was created in the country in which such a ghastly tragedy became possible.”– Sardar Vallabhbhai Patel, India’s first home minister, on the assassination of Gandhi, in a letter dated 18 July 1948 to Shyama Prasad Mukherjee. (Sardar Patel’s Correspondence, volume 6, edited by Durga Das)

Today, the RSS is very much part of the state as the ideological fountainhead of the ruling party, so are the people who defend the likes of Godse. They are spreading hate not only against the religious minorities but also against those who are trying to uphold democracy, pluralism and diversity in society.

A culture of open debate amid a diversity of viewpoints is the best guarantee for a democratic society. The sectarian ideologies are opposed to the democratic ethos and so are ratcheting up intolerance. There is a need to protect democratic freedoms by combating communalism. 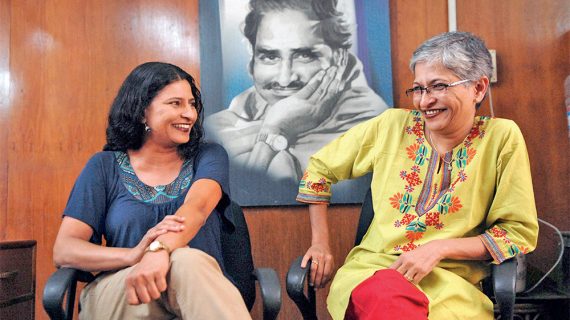 Gauri Lankesh kept hacking at the root of injustice

She personified the very spirit of freedom of expression and dissent, democratic values, and raw moral courage in the face of opposition and threats to her life. And she carried all this very lightly on her slim shoulders 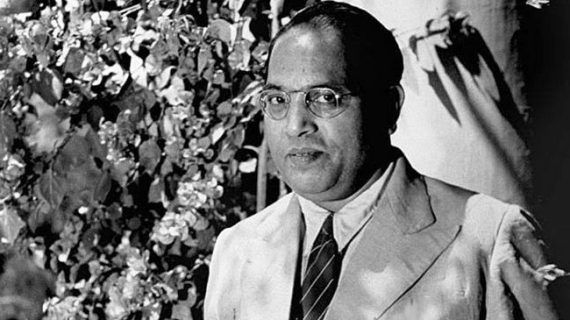 Describing the government’s newfound reverence for Dr Ambedkar as fake, Tejpal Singh ‘Tej’ argues that having demolished Ambedkar’s Dadar house, the Sangh is out to destroy his ideology as well