It is not without reason that five eminent Indians arrested on 28 August have been linked to the Koregaon incident. Bhima-Koregaon case is gaining importance. RSS knows it too well that if it doesn’t create an atmosphere of fear then the foundation of Dwij cultural nationalism will come under threat, which it has built assiduously on the foundation of Ramjanmabhoomi Mandir. It is my opinion that we should ponder over this subject with a calm mind.

The Ramjanmabhoomi-Babri Masjidissue in Ayodhya has been debated for a long time. In fact, politics in the past two decades of the last century has revolved around this issue. I don’t think that it is necessary to dwell on the details. But it becomes necessary to discuss the issue in the context of this article. The Ramjanmabhoomiissue of Ayodhya was confined to the dwij Hindus. All those involved, leaders and rank and file, were dwij Hindus, most of whom were associated with the Akhadas of Ayodhya. Hindus recognize Ram in two forms. One is Sagun (physical, mortal)Ram; second is Nirgun (non-physical) Ram. Sagun Ram was the son of King Dashrath and Kaushalya. His life story has given rise to several folklores. Based on these lores, a lot of poetry and prose has been created. But the other Ram is Nirgun. He is beyond birth and death. This form of Ram was adopted by the poet-saints such as Kabir and Raidas. They developed their spirituality keeping this Ram in mind. Those who cannot differentiate between these two forms of Ram are not aware of the soul of the Indian culture.

We have seen how the Ramjanmabhoomi movement gradually took center stage in rightist politics. As Ramjanmabhoomi-centric politics developed, the base of vote-bank of the rightist politics became stronger. The corporate and the well-off formed the base of the rightist politics. The landlord and priestly class formed its base in the rural areas. Socially, this is the Hindu dwij class. It is an influential class of the upper castes. The culturally and economically weaker section of the dwij class also extends support to this advanced section. It assumes that by doing so, its own advancement to some extent would be assured.

In brief, the Ramjanmabhoomi movement became such a cultural movement of the dwij Hindus that it strengthened their politics, and their collective socio-economic interest came to acquire center stage in politics. Along with this development, all the socialist economic measures were gradually pushed out of their political agenda.

But when there is an action, there is also a natural reaction. At times, the reaction is guided by the subconscious forces of history. Reaction to the Ram Mandir was expected. It was expected that the reaction would come from the adwij (non-dwij) class. The reaction of the Dalits and backward classes echoed several times and took different forms. Generally, lessonsfrom mythology and history and responses to them do not follow definite rules. Usually, responses are unpredictable and surprising. The Mahishasur episode revealed one form of reaction. Bhima-Koregaon formed an important link in the chain of such reactions. One of the reasons for this incident acquiring such impressive stature is that the Dalits are the protagonists. Here, the Tribals and the backward classes are driving the Mahisasur movement. But all these events are a reflection of the cultural awareness among the deprived classes.

Let’s understand the Bhima-Koregaon issue, which became a matter of national debate in January this year. A group of Dalits, who were on their way to the Koregaon victory celebrations near Pune, were attacked brutally, leaving one person dead and many wounded. In response, protest rallies were held in Mumbai and several cities and towns of Maharashtra. In no time, this issue had become a matter of national discourse. 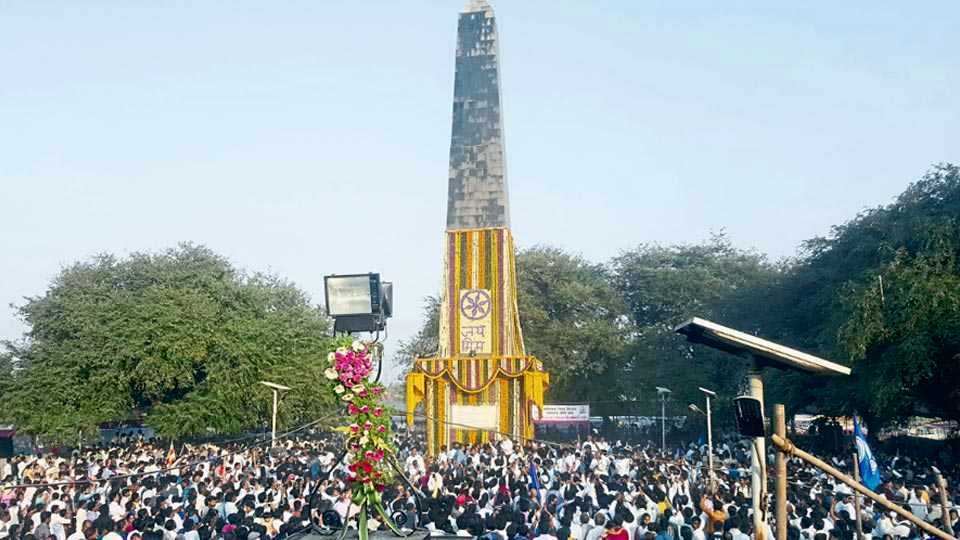 The Victory Pillar in Koregaon – the symbol of Dalit valour

It is necessary to know the history of Koregaon. In 1818, a battle was fought in Koregaon between the forces of Bajirao Peshwa and the East India Company. The Peshwa’s army was defeated. It was a historical, interesting battle. Peshwa army had 28,000 soldiers, comprising 20,000 cavaliers and 8,000 foot soldiers. The Company had deployed 834 soldiers. The army of Peshwa had Arab, Gosai and Maratha soldiers, whereas the Company’s army had soldiers mainly from Bombay Infantry Regiment, who were Mahar by caste. It is understood that out of 834 soldiers, at least 500 were Mahars. Bapu Gokhale, Appa Desai and Trimbakji led the Peshwa’s army, while Francis Staunton led the Company force. The battle began on 31 December 1817 and continued till the next day.

Koregaon is situated to the northeast of Bhima River. The Company soldiers dealt a crushing defeat to the Peshwa forces. The Peshwa’s army retreated and eventually, Bajirao had to surrender on 18 June 1818. It was a major victory for the British. A Victory Tower was built in Koregaon to commemorate the victory and, out of the 275 deceased soldiers, names of a select group of 49 soldiers were inscribed on it. Of these, 22 are Mahar soldiers. Certainly, the deceased British soldiers would have been given preference, but everyone knew that this victory belonged to the Mahars.

During the Independence struggle, we viewed the Victory Tower as a symbol of loss of our national pride. We had determined the structure of the national movement as such. But Ambedkar viewed this Battle of Koregaon as a display of Dalit – especially Mahar – valour. It was a novel, scientific way of interpreting history. Since then a lot of people have been remembering the day when the victory was won at Koregaon as the day of Dalit triumph. And they should have the right to remember it as such. We may revisit the history of our nation on this pretext.

What could have been the reasons for our indifference to ascertain the causes for our defeats? We kept on losing battles to the Turks, the Afghans, the Mughals, the British and the Chinese. We lost all these battles because we had weakened and afflicted a large section of our society. It was subjected to exploitation. They gave a better account of themselves when offered an opportunity.

Bhima-Koregaon thus offers a greater cultural message as compared to Ayodhya; if BJP regards Dalits and other backward castes as Hindus, then Koregaon is the national monument of Bahujans’ self-respect and valour. If it wants to, the entire nation can learn a lesson, not the Dalits alone. But the BJP-Shiv Sena government, at the behest of the Nagpur-based Sangh Parivar, wants to crush this awareness. It has not understood or does not want to understand the historic and cultural importance of the event. They regard the Victory Tower as a symbol of their defeat. But Dalits had gained victory by sacrificing their lives. 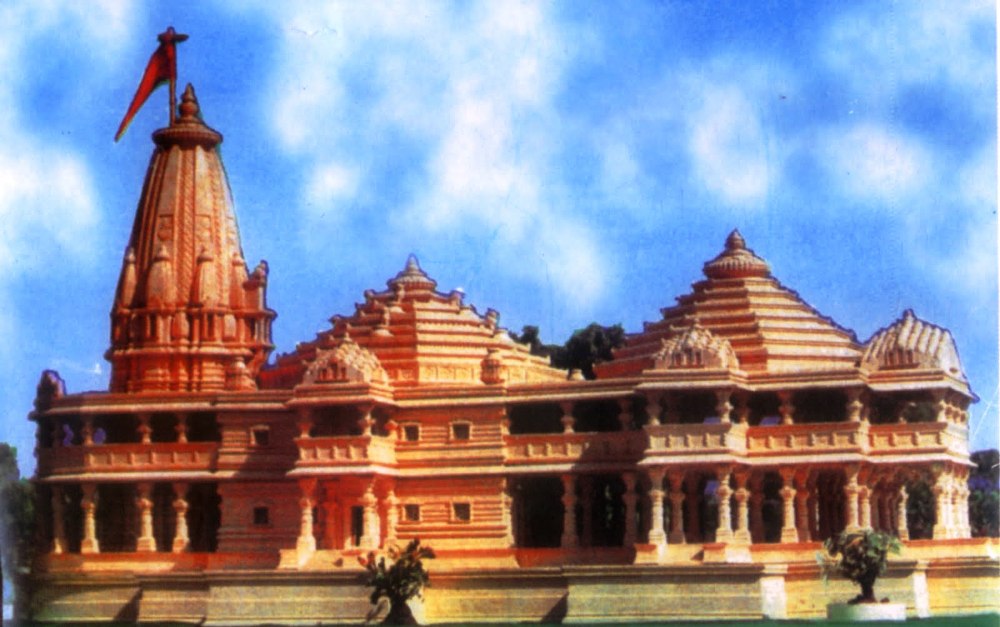 A model of the Ramjanmabhoomi Mandir

Why is it that the defeat of the Peshwa becomes the victory of Dalits? It is a fact that the nation of the Peshwas and the Dalits was not one and the same. At least the Dalits were not part of the nation of the Peshwas. It is true that the Mahars did not fight for their nation. But we may also ask, “Did they have their nation?” Whichever side they fought for wouldn’t have been theirs. For them, both the Peshwa and the English were “the other”. But Peshwas were their class enemies, not the English.  They were made to fight on behalf of another nation and they won.

What is clear is that they did not lack merit. In independent India, reservations have been given to them based on the principle of special opportunity, which is regarded as charity. Some people regard themselves as donors and others as receivers. The system of reservation is there because we have a faulty standard of measuring merit. Once the appropriate standard of merit is determined there won’t be any need for reservation.

Why is the BJP so disturbed with the Bhima-Koregaon movement? Many cities in the country were raided in this connection. Why noted individuals like Varavara Rao, the famous Telugu poet; Sudha Bharadwaj, the human rights activist; Gautam Navlakha of the Economic and Political Weekly;and other respectable personalities have been arrested in this connection? It is understood that they will be prosecuted under Section 153 (A) of IPC. But this law is used against those who spread hatred between two communities. Are people like Varavara Rao, Sudha Bharadwaj and Gautam Navlakha spreading hatred? This is too much.

Perhaps, it is not. RSS-BJP is deeply disturbed. It has been told that that celebration of Bhima-Koregaon movement is creating a parallel nationalism. If this happens, then the Ram Mandir may find a match in Koregaon. It is my opinion that a cultural clash between the two is inevitable. I also feel that if everything goes well, then in three years’ time Bhima-Koregaon episode will overshadow Ramjanmabhoomi. The nation will not prosper by keeping Ram Mandir in the centre of politics; it will prosper with Bhima-Koregaon type of politics. 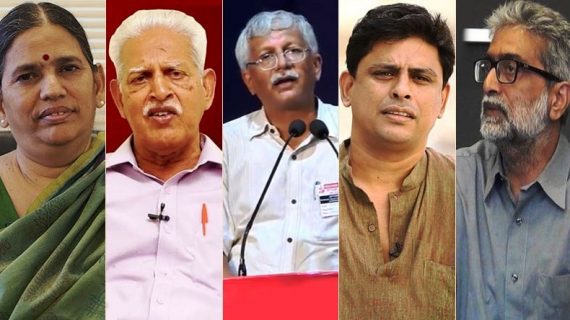 India is not only RSS’s. It is also Varvara, Vernon, Sudha, Ferreira and Navlakha’s

Recently, Maharashtra police arrested five intellectuals and social activists in connection with the Bhima-Koregaon violence. The Supreme Court has ordered that they be placed under house arrest till 7 September. The arrests have triggered a debate. Amid this debate, Premkumar Mani issues a rejoinder to the queries raised with regard to one of his articles