Recently, I came across a rather strange proposition. A Dalit author argued that Savitribai Phule could not be the symbol of Dalit literature but that instead Achootanand Harihar’s wife deserved the honour. Contrast this laughable contention with Babasaheb Ambedkar describing Buddha, Kabir and Jotiba Phule as his ideals – none of whom were Dalits. This begs the question of what has become of the Dalit literary movement and whether, in the words of Mahatma Phule, it has been reduced to merely the “literature of the Atishudras”. This begs another question, too: Can Dalit literature, which arose as a protest against the Varna system, provide a literary and cultural alternative to Brahmanism without giving expression to the pain and struggle of the Shudras, who also suffered under Brahmanism? Thus the need for the concept of a joint struggle on the literary plane of Shudras-Atishudras and Tribals is being felt. This can be and is being called Bahujan literature and can be described as “Phule-Ambedkarite literature” too.

The present social milieu of the OBCs should also be kept in mind. It seems that Brahamanism has struck 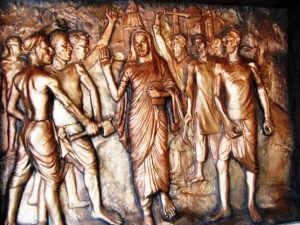 We humans have a natural resistance to change. We are wired to be status quoists. Attempts are being made to construct counter-myths to take on the popular Hindu myths. This is a social reality which cannot be ignored. Whether it is worshipping Mahishasur or re-rendition of the story of Holika or a Dussehra dedicated to great Bahujan personalities in Maharashtra or the celebrations around Baliraja – they all are alternative cultural efforts. Only Bahujan literature will show this cultural consciousness and take on Brahmanism. Bahujan literature should grow with Dalit literature as its extension and it should not oppose the existing Dalit literary movement.

The proponents of this concept will have no dearth of challenges. This year, FORWARD Press has brought out this Bahujan literature special number. Next year, why not publish articles that focus on the benchmarks of Bahujan literature, the foundations of its aesthetics and criticism of some well-known literary works? These are all part of aesthetics.