Do you really think something can in fact be done? Most interested to be inspired to act.

The problem is indeed massive, which is why the solution needs action by us all.

At an individual level, we can all insist on avoiding fixers if we can. You should think of joining the “India No Bribe Coalition” (www.nobribe.co.in), and spread the word about it to all your contacts. Research shows that declaring your values enables you to better stick to them, and discourages others from trying to shift you from your values. 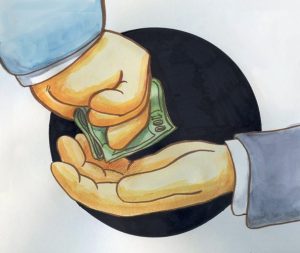 However, if due to some urgency or other, we can’t avoid a fixer, then there are sites such as “I paid a bribe” (www.ipaidabribe.com) where one can make the details public. As of this morning, that site has over 75,000 reports, from over a 1000 places in India, reporting the details of bribes worth nearly Rs 2,500 crore. That sort of thing adds to the weight of information against individuals and institutions, and forces action by those who should be acting anyway but are either compromised or lazy.

Such individual actions are essential. The “fixer culture” cannot be cleaned up without grassroots action.

However, there are also structural or systemic things that must be done to clean up the “fixer culture”. India is sometimes described as a “patronage democracy” – the state plays a powerful role in the lives of citizens, particularly as officials have a great deal of discretionary control over the allocation of goods and services. The “fixer culture” would have much less of a grip in our system if there was less discretion regarding interpretation and application of rules, forms and procedures. These can be simplified and transparently put on the internet, with a defined time-limit for decisions to be taken (and a penalty upon the officer responsible if he or she goes beyond the time-limit). In some cases, the rules are out of date; in other cases, the rules are imperfectly framed; and in yet other cases, there are only precedents or the good sense of the officer to guide her or him. That is partly what creates the possibility of “fixer” intervention. A simple thing like reduction in the number of forms required can help. As transparency increases, the usefulness of “fixers” decreases. Some states in our country are quite advanced in simplifying rules and in using the Web to create transparency, but in general this sort of thing is not moving fast enough, and of course those who want to continue to benefit from the “fixer system” are very keen to use every possible excuse to avoid theimplementation of any threat to their income.

The key is not merely how fast such transparency is implemented but also how vigorously it is monitored and used to ensure that bureaucrats are acting appropriately. It is the same with running a country or an organization: if rules are violated, it is essential that due procedures are followed and that penalties are imposed. Otherwise, if there are even a few cases of penalties not being imposed for whatever reason, everyone will feel that they can do as they wish. On the other hand, it just takes a few cases of penalties being imposed to get everyone to stand smart.

Citizen action can also be properly structured, so that people are not dependent on “fixers” to obtain individual “favours”, but so that community leaders and elders, local associations, and civil society organizations can all play their part, if necessary, to ensure that the system as a whole is working properly.

Anything that can be done to foster competition and sharing of best practices across divisions and states is clearly good, and has started happening – though again too slowly.

Raising the quality of education and training for our bureaucrats, and specifically for those whose job is to monitor their performance, will also help.

Before I conclude, let me come back to the comment that I made above in relation to income. That is a key matter. If the official pay of a teacher or a police officer is so little that she or he can’t survive on it, why should we be surprised if the person becomes innovative and entrepreneurial about how to get more money? In other words, we must pay people well, so that we can insist on timely and excellent performance. At the time the old Soviet Union collapsed, one of the bureaucrats joked, “They pay us peanuts and we behave like monkeys.” But ensuring that our judicial, political and civil leaders are paid properly is much easier than ensuring that they don’t behave like monkeys.

It begins with making sure that capable, honest and efficient people with the right values get into politics and are then supported by each of us. Because the tone regarding “fixers” is fixed at the top. Particularly in a democracy, each of us has a responsibility to resist the wrong and ensure the right.

So what are you going to do today to fight what is wrong, in order to help what is right to win?