In Bihar, in the elections to the Rajya Sabha and the Legislative Council, all the parties took care of their respective vote-banks while selecting candidates. Besides the political concerns, they were also mindful of the economic, sociological and power equations. The result was that the Dalit castes were relegated to the margins while the BJP gave short shrift to its key base – the Bhumihars. 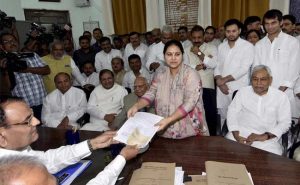 Initially, there was confusion in all the political parties regarding the selection of candidates. There were any number of claimants for each seat. It was certain, though, that the RJD would send either Misa Bharti or Rabri Devi to the Rajya Sabha. The latter was the favourite in the initial stage but ultimately, Misa Bharti was chosen. There was a long list of claimants for RJD’s second seat. But once the name of senior lawyer Ram Jethmalani was proposed, others withdrew quietly. For the two seats of the Legislative Council, it was being said that the RJD state president Ramchandra Purve’s nomination was certain. Speculations were rife about who would get the second seat. But the party ultimately fielded dark horses Ranvijay Singh and Quamar Alam. The central leadership of the Congress picked Tanvir Akhtar.

From the JDU, the name of Sharad Yadav was almost finalized for the RS. Many names were doing the rounds for the second seat. Among them were R.C.P. Singh and K.C. Tyagi. It was being said that Singh would get the advantage of being from Nalanda and belonging to the Kurmi caste. But from the way Tyagi was calling Nitish Kumar “PM material”, it was being speculated that he would pip Singh to the post. Ultimately, the party chose R.C.P. Singh. The JDU was the first to announce its candidates. The state chief of the party, Vashishtha Narayan Singh called a press conference to announce the names. For the Legislative Council, C.P. Sinha and Gulam Rasool Balyawi were chosen. Balyawi is currently a member of the RS and Sinha, the chairman of Kisan Ayog.

From the BJP, the candidature of Sushil Modi for Rajya Sabha was said to be certain. But the party’s national leadership favoured former state president Gopal Narayan Singh, who has links with the mining industry and also runs a medical college in Sasaram. For the Legislative Council, the BJP was in two minds as to whether it should put up candidates for one seat or two. Victory on one seat was certain while for winning the second, it would have needed additional votes. The party initially announced the name of only Arjun Sahni. The party appeared confused till May 30 as the RJD had also indicated that it would field a third candidate. That would have complicated matters for the BJP. On the evening of May 30, the RJD announced that it would not be fielding the third candidate. The BJP then immediately announced the candidature of former MLA Vinod Narayan Jha. 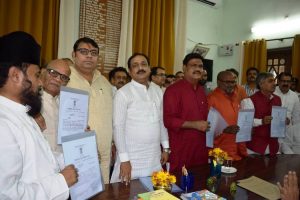 All the parties took care of their vote-banks. All the three parties of the Grand Alliance gave preference to Yadav and Muslims. RJD and JDU sent one Yadav each to the RS and the JDU paid back Kurmi voters by sending R.C.P. Singh to the Rajya Sabha for the second time. Ram Jethmalani’s candidature is being linked with RJD supremo Lalu Yadav being embroiled in many criminal cases. Gopal Narayan Singh had the advantage of his proximity with the central leadership as well as the party’s desire to return the favour of Rajput voters.

For the Legislative Council, all the three parties of Grand Alliance chose one forward Muslim each. Pasmandas were ignored. “Money power” is said to have a played a crucial role in the selection of Ranvijay Singh. C.P. Sinha was rewarded for his loyalty to JDU chief Nitish Kumar. BJP chose an EBC and a Brahmin.