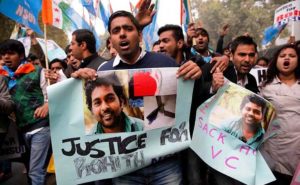 Is the suicide of Rohith Vemula, which is also being described as institutional murder, the outcome of some extraordinary developments on the campuses of our institutions of higher learning? A close reading of the BJP’s reaction to the suicide of Vermula would give you an idea of how historic and extraordinary these developments are. The BJP general secretary, referring to the holding of events like the beef festival and Mahishasur Martyrdom Day on university campuses, said that some organizations were out to break India to pieces and divide society. What has caused the ruling Hindutvavadi party to be so alarmed? The Hindutvavadi organization (RSS) that controls the levers of power is in a state of panic. Its organs are persistently voicing concern over the celebration of Asur Diwas and beef festivals in universities.

To understand this phenomenon, we have to delve into recent history. After the formation of the Narendra Modi government, the Hindutva forces were on cloud nine. This was evident by New Delhi playing host to the “World Hindu Congress” in the last week of November 2014, barely six months after Modi took over the reins of the government. Hindu ideologues came from all over the world to attend the event and made no secret of their dream of establishing an “absolute Hindu Raj” under the leadership of Modi. Pamphlets in English being distributed at the Congress cautioned the delegates against five “Ms” – Macaulay, Marxism, Missionary, Materialism and Muslim extremism. The hullaballoo over “love jihad” and the lynching of a man in Dadri were subsequent manifestations of this elation. It was also reflected in the rabid statements of union ministers and in the attempt to saffronize university education. Hindu zealots have never been so active after Independence. In some places, 26 January – the day when India became a constitutional republic – was observed as a black day; in other places, Gandhi’s murder was hailed. Some openly talked of a need for reviewing reservations – an enactment to bring the communities left behind on a par with the others. Attempts were made to usurp Ambedkar – a bitter critic and opponent of Hindutva. Meanwhile, on university campuses, the “nationalist” Akhil Bharatiya Vidhyarthi Parishad (ABVP) is active with renewed vigour and the Union Ministry of Human Resource Development, at the behest of the RSS, is trying to saffronize curricula.

Political theorists would describe this as counter-revolution. The “dominant” forces, with the indirect and direct backing of the government, are trying to push the country backwards. They abhor the constitutional, democratic system that has been a catalyst for transforming society and has ensured greater representation of the deprived groups in cultural, economic and political spheres and in the centres of power. They cannot digest the growing influence of the thoughts of the flag-bearers of equality like Jotiba Phule, Savitribai Phule, Dr B.R. Ambedkar, Periyar, Birsa Munda, etc.

Not for the first time

It is not that the counter-revolutionary forces are hyperactive for the first time in Indian history. Around the 1st century AD, a concerted attempt was made to obliterate Buddhist influence during the rule of Pushyamitra Shunga. It was in this period that texts like Manusmriti – that sought to accord legal and religious sanctity to caste, Varna and gender discrimination – were written. Some historians say that it was a bloody era when Buddhists were slain by elements enjoying the patronage of the state.

The same happened around the 9th century AD when, under the leadership of Adi Shankaracharya, all means – including brutal violence – were used to establish cultural domination. In the same era, Buddha was declared an incarnation of Vishnu in an attempt to assimilate into Brahminism the Buddhist ideology based on the principle of equality in society. In the 12th century AD, literary works like Geetgovind were deftly used to popularize the notions of incarnation.

For the last couple of years, the Hindutvavadi organizations have come to believe that they enjoy the complete backing of the state. The government of the day is dropping not-so-subtle hints that they do have its direct and indirect backing. A large section of the political forces battling for the deprived groups has either entered into an opportunistic alliance with the powers that be or is maintaining a stoic silence. Is the Varnashram-based aggressive Hindutva making a comeback? Is another counter-revolution in the offing?

The answer is a firm no. This is confirmed by what is happening on university campuses. And also by the aggressive posturing of the counter-revolutionary agents in regard to the universities. Unless a complete control over universities – the disseminators of knowledge – is established, the counter-revolutionaries won’t be able to achieve their objectives. At the same time, groups of students who support egalitarianism and hail from deprived sections are not only strongly resisting these forces but are also trying to attach an element of prestige to their traditions. Rohith Vemula’s suicide – which is indeed an institutional murder – was the fallout of the tensions generated by this confrontation.

The number of Dalit-OBCs in institutions of higher learning has witnessed a significant increase in the recent years, both due to reservations and more people being educated. These students are not only challenging the traditional structure of generation and dissemination of knowledge but are also rediscovering their past. These students have formed groups and named them after Ambedkar, Periyar, Phule and Birsa Munda and, as a part of their advocacy of the freedom of food choice, are organizing beef and pork festivals. Starting from JNU in 2009, the observance of Mahishasur Martyrdom Day has spread to 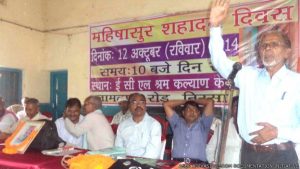 different parts of the country. In Hyderabad, “Asur Week” was celebrated in the English and Foreign Languages University and “Narkasur Anniversary” was celebrated in Osmania University. And this tradition has spilt over to wider society as well. Even in Bengal – known for venerating the Devi who “murdered Mahishasur” – many groups have started observing Mahishasur Martyrdom Day instead of Durga Puja. The case filed by auxiliary outfits of the RSS against the FORWARD Press magazine, which gave impetus to the trend of celebrating Mahishasur Martyrdom Day, reflects their unease.

Here lies the challenge before the Hindu upsurge. The loosening of their stranglehold on knowledge is coming in the way of their Hindu resurgence campaign. Marxist thinker Professor Chauthiram Yadav, who sees identity consciousness in a positive light, says, “The forces of resurgence have always been using violence, deceit and inducement to serve their ends. The massacres of Buddhists in the age of Shunga and of believers of other faiths in the south in the 9th century and murders of Paltudas in Benaras, Sant Tukaram in Maharashtra and Meerabai in Rajasthan are all instances of the blood-soaked past of these forces.” According to Chauthiram, these forces operate on three levels: 1) opposition 2) disinformation and 3) assimilation.

Bubbling with enthusiasm, the Hindutva forces are using all the three strategies simultaneously. They are opposing advocates of equality active on campuses, using disinformation against them, and are trying to usurp Ambedkar and other thinkers of his ilk. Will their sinister designs succeed in the 21st century and in a democratic set-up? Will the forces that had obliterated Buddhism by violence and by appropriating Buddha as an incarnation of Vishnu be able to do the same with Ambedkar in the present-day India with its firmly rooted democracy and high levels of awareness and knowledge? Will it be easy to assimilate Ambedkar, given the fact that he had abandoned Hinduism in 1956 and had bound his disciples to 22 oaths? Says Pramod Ranjan, consulting editor, FORWARD Press, “The influence of based Bahujan thoughts based on equality is growing on the campuses. Slogans hailing Phule, Ambedkar, Savitri and Birsa are reverberating on the campuses of universities across the nation.”

The teachers and students who believe in the ideology of Phule, Ambedkar and Periyar are posing a stiff challenge to the resurgent Hindutva. The Hindutva groups are unlikely to shun their beliefs and jargons like the “five Ms”. The deprived sections are reinterpreting their past via the Asur route. The challenge that faces the counter-revolution this time around is formidable and historic.

The final outcome of the police action against JNU Students’ Union and the rightist assault on the students and teachers of the university under state patronage is anybody’s guess but the report of the intelligence wing of the police bares the final agenda of the Hindutva forces. The report describes the observance of Mahishasur Day on the JNU campus as the doing of Maoist organizations. It would be erroneous to believe that the police mistakenly attributed the event to the DSU instead of the All Indian Backward Students’ Federation – which was actually the organizer of the event. It is part of a deliberate strategy to prepare the ground for a crackdown on the Dalitbahujans’ campaign to assert their cultural identity.

The social composition of the students of JNU has changed drastically. And its impact can be felt. During the protests against the unwarranted police action against the students, slogans of “Jai Bhim” were also raised. After acting in haste, the government is indulging in damage control. However, the stiff resistance put up by the JNU students to the forces of counter-revolution has become part of history.

Mahishasur: Ek Jan Nayak (Hindi) chronicles and explains the Mahishasur movement. Visit http://www.amazon.in/dp/819325841X and get yourself a copy. The English edition will be available soon)