The Indian electoral system is highly volatile. The different strategies (and electoral outcomes) of the political parties over the last six months can help us understand the causes of this volatility. The Bharatiya Janata Party (BJP) is struggling to hold on to their alliance partners such as the Telegu Desam Party (TDP), Shiv Sena, and Janata Dal (United) [JD(U)]. Meanwhile, the Congress has relinquished the Chief Minister post in Karnataka in favour of junior partner Janata Dal (Secular) [JD(S)]. Once bitter political enemies, the BSP and SP have come together to fight against the BJP, successfully winning three recently concluded by-polls in Uttar Pradesh (UP), the largest state in India. 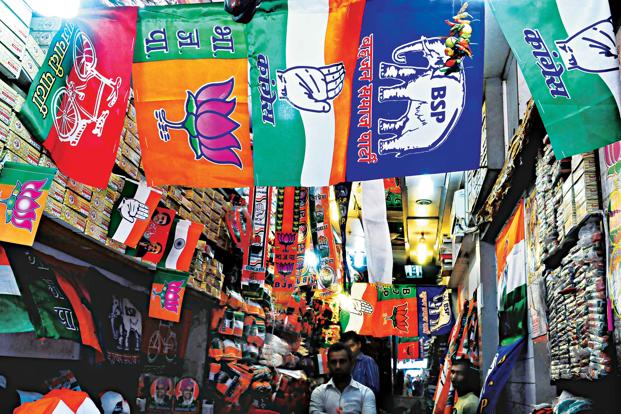 The by-poll results in UP, in constituencies thought to favour the incumbent BJP state government, show the BJP may be vulnerable despite being in power at both the state and the Centre. This loss could also be significant, as it includes two seats that were represented by the incumbent chief minister and deputy chief minister of the state – in a state where BJP won 71 out of 80 parliamentary seats in the 2014 national election.

Despite the massive gain for the BJP in terms of votes and seats in 2014, the regional/small players (see graph 1) actually increased their vote share by one percent. The real exchange occurred between BJP and Congress (INC). The biggest loser was INC, but the major losses also accrued to the Left parties and Independents. The loss of the Left is significant here as its vote share declined to almost half of its share from the previous election.

The aggregate vote share of regional/small parties remained the same at the national level, but the devil is in the details. If one looks at the data from those states where regional parties are major players and decisive to the electoral outcome, a different story emerges. These data can shed light on the current strategies of regional parties. We look at the vote-share trends of those states where regional parties are strong like Andhra Pradesh (including Telangana), Assam, Bihar, Haryana, Jammu & Kashmir, Jharkhand, Karnataka, Maharashtra, Odisha, Punjab, Tamil Nadu, Uttar Pradesh and West Bengal.

Graph 2. Vote share of parties in those states where regional parties are strong

The combined vote share of two dominant parties in India, BJP and Congress, hovers between 35 to 43 percent in these states, but around 60 percent of the vote has gone to smaller regional players, the Left or independents in these states. This demonstrates the consistent dominance of non-BJP-INC parties in these states.

One explanation for this huge swing in favour of the BJP in 2014 could be the Modi wave. A closer look at the vote-share change for regional parties reveals that their vote share reduced almost exclusively in urban areas, where regional parties lost 3 percent. The vote share of regional/small parties in rural constituencies remained steady and in semi-urban areas their vote share increased by 7 percentage points. Three consecutive graphs below are helpful to understand these trends.

Graph 2a. Vote share of parties in urban areas in those states where regional parties are strong

Graph 2b. Vote share of parties in semi-urban areas in those states where regional parties are strong

Graph 2c. Vote share of parties in rural areas in those states where regional parties are strong

The graphs above demonstrate that regional/small parties remains strong in their bastions. Yet, from 2009 onwards, they have lost their base in urban localities to the Congress and the BJP. What explains this disjuncture between regional party votes in urban and rural areas? The answer is in how the regional parties emerged.

Regional parties are often derived from identity-based movements that prioritize either ethnic or linguistic issues. The strong support of regional parties in rural areas is due to the strong sentimental connection between the voters and the leaders of these parties, which helped them to formalize a strong organization and mobilize a strong cadre on the ground. This is why the BJP is worried. If these regional/small parties make an alliance with the Congress, they may have strong prospects for the 2019 national election.

This article originally appeared in ‘Asia Dialogue’, the online magazine of the University of Nottingham Asia Research Institute. It has been reproduced here with the author’s permission.

Ashish Ranjan is a research fellow in Ashoka University, Sonepat.