When Electronic Voting Machines (EVMs) were introduced in Indian elections, it was, by and large, welcomed by all. The proponents claimed that EVMs would reduce the election expenses and will help preserve environment, as we no longer have to depend on paper. They also said that it would end the loot of ballot boxes. These features appealed to all those who believe in the wellbeing of the country. Consequently, the EVMs replaced ballot papers in India.

As the use of EVMs was gradually increased, a Hyderabad-based computer engineer, Hari K. Prasad, demonstrated the vulnerability of EVMs by tampering with the original EVM. Since he had used the original machine for his experiment, the government ordered his arrest and the matter took a different direction. At the time, no one from any of the political parties or civil society, except Telugu Desam Party leader Chandrababu Naidu, shared his concern[i]. Later, Prasad, along with his colleagues, wrote a research paper showing how easily one can tamper with EVMs[ii]. Yet, there was little support for this opposition to the use of EVMs. 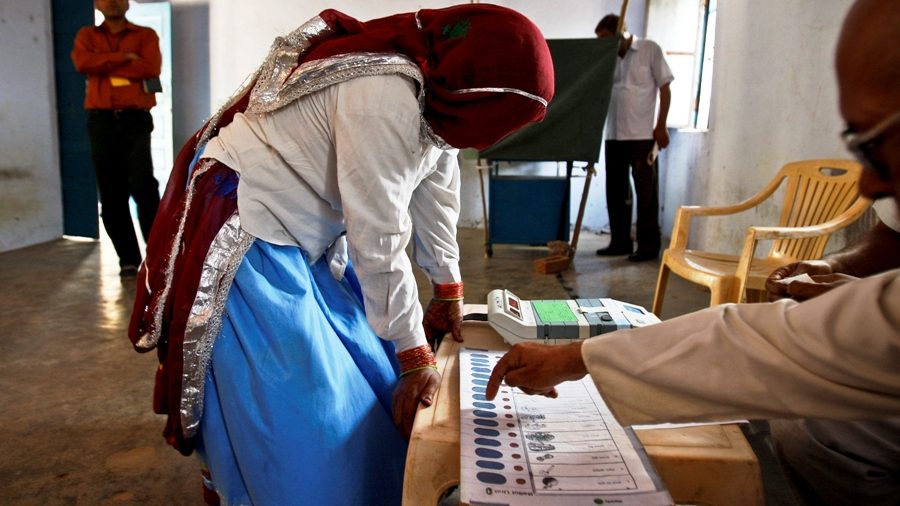 A woman learns how to use an EVM at a polling booth in Kot, Haryana, in 2009

There was no discontent among the political parties till the beginning of 2014 General Elections. However, after Narendra Modi-led Bharatiya Janata Party (BJP) secured its grand victory, some political parties started raising their suspicion about these machines. When the BJP swept the 2017 Uttar Pradesh assembly elections, the doubts about EVMs intensified. Political parties and civil society became more vocal about the use of these machines. In a recent meeting convened by the Election Commission, 17 opposition parties made a fresh demand to use ballot paper instead of EVMs in the 2019 General Elections. 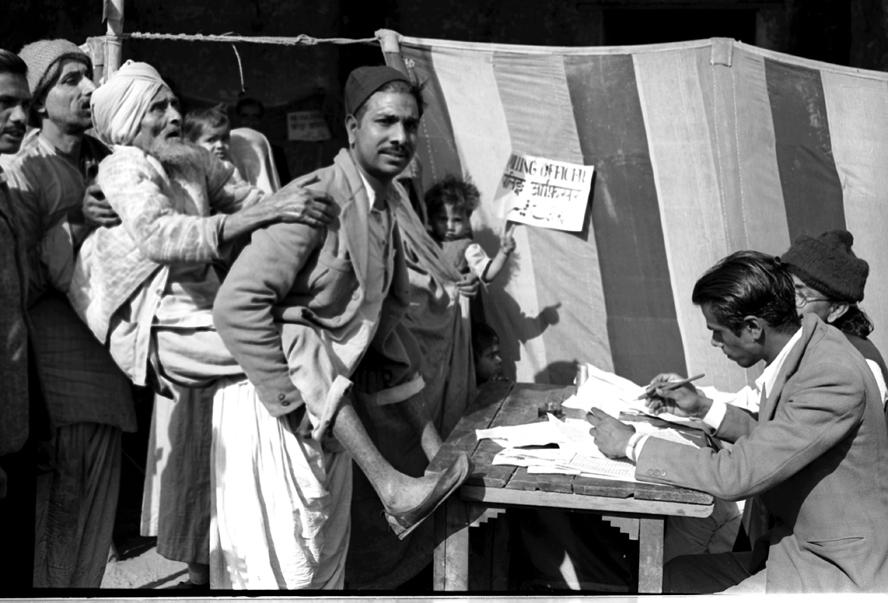 A blind old man being carried by his son to help him to cast his vote, near a polling station in Jama Masjid area in Delhi during the 1952 General Elections (Photo courtesy: thebetterindia.com)

The arguments against the use of EVMs, however, have remained limited to the probability of tampering. Had this been the only risk, the added feature of VVPAT could be a fine solution. However, EVMs pose another danger to the sanctity of elections.

Few years ago, the journal Economic and Political Weekly published a letter that I had written to the editor. I wrote how the use of the “NOTA” (None of the Above) option by voters may lead to them being as separatists and Naxalites in some area [iv]As the votes are counted from EVMs in each polling booth, agents of political parties can work out with reasonable accuracy who has voted for them and who hasn’t.

You may ask: How are they able to do that? Human settlements in India, whether rural or urban, are still largely based along caste and religious lines. Even the metros like Delhi, Mumbai, Chennai and Kolkata are not exceptions. In all towns and cities, Dalits and Muslims are still ghettoized in their respective “bastis”. Dalit localities, often named “Bhim Nagar”, exist in almost all cities and towns. Some cities have separate Christian colonies. In case of Muslims, even their rise to upper-class stature by virtue of their occupation doesn’t allow them to leave their traditional Muslim localities, due to the fear of communal riots. For instance, in Bhopal, the Muslim and non-Muslim populations are clearly segregated as old and new Bhopal, so is the case with Delhi and other cities that contain a sizeable population of Muslims. In the rural areas, caste-based settlements are a reality. As far as the Adivasi (tribal) areas are concerned, villages and clusters of villages exclusively belong to them.

In such cases of spatial segregation, EVMs can reveal the voting pattern of a particular community. When votes are counted from a particular polling booth, where a sizeable presence of a particular community exists, their general voting preference is revealed. The grass-roots activists of parties will be quick to exploit this information, often unfairly, to their party’s advantage. With the booth-level figures out in the open, in a segregated society like ours, the constitutional provision of secret voting is violated.

Framers of the Indian Constitution, were well aware of the issues pertaining to open voting. That is they emphasized secret voting. They knew about the possibility of forced voting when the choices of the voters are not hidden during polling. Dominant social groups could force weaker communities to vote for the candidate of their preference. Dr B.R. Ambedkar referred to the ancient Buddhist custom of secret voting for a free and fair election. During a debate in the Constituent Assembly, R.K. Sidhva also said:

“The secret ballot-box could also be provided in the Constitution which is very essential for an election. The whole thing depends upon the election for the future constituencies and if we do not make this provision in the Constitution and leave it to Parliament to be made, it will be running a great risk.” [v] 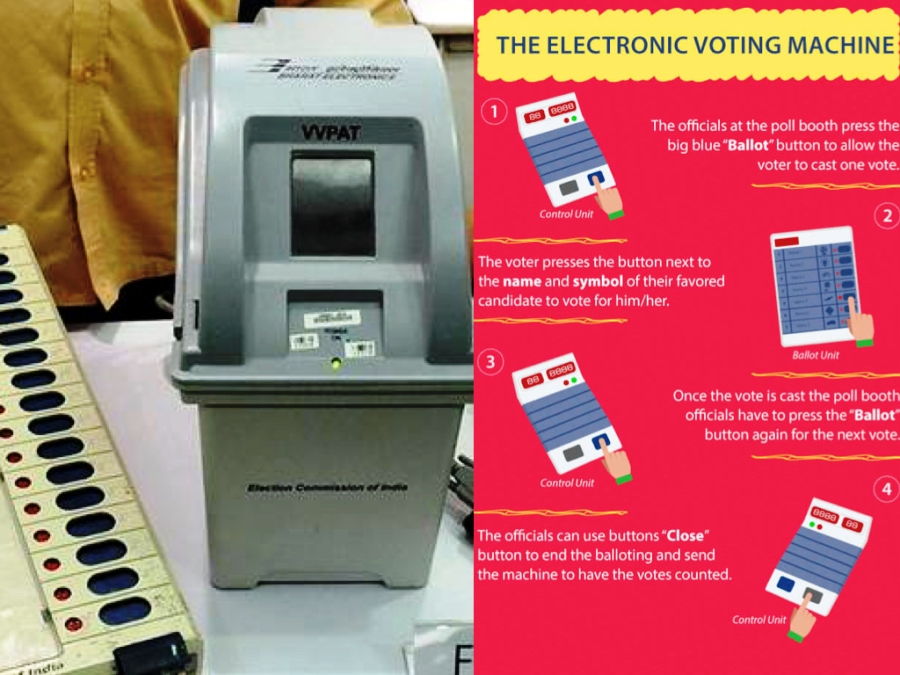 How an EVM works

Therefore, our Constituent Assembly adopted in principle the system of secret voting. But as we saw earlier, the principle is not being adhered to in practice.

T.N. Seshan, the former election commissioner, introduced a technique of shuffling the ballot papers of all the booths in a particular constituency. He had them put in a drum and rotated with the help of an attached handle. This shuffling of ballot papers ensured that the booth-level figures remained unknown and upheld the Constitutional provision of secret voting. However, with the introduction of EVMs, we have gone back to our old ways.

In recent days, the claims about the possibility of EVMs being tampered with have somehow overshadowed the violation of the Constitutional right to secret voting. The problem with the EVMs is not just that they can be tampered with. It is the way the votes are being counted – which goes beyond the use of EVMs. And at stake is our democracy.

Ratnesh Katulkar is a social scientist at the Indian Social Institute, New Delhi. He has been active in the

[iii] Subramanian Swamy vs Election Commission Of India on 8 October, 2013 available at https://indiankanoon.org/doc/113840870/

[iv] This was published in the Letters column of EPW available at https://www.epw.in/journal/2013/49/letters/not-good-democracy.html

Ratnesh Katulkar is a social scientist at the Indian Social Institute, New Delhi. He has been active in the Dalit Movement and has recently authored a book ‘Babasaheb Dr Ambedkar aur Adivasi Prashn?' 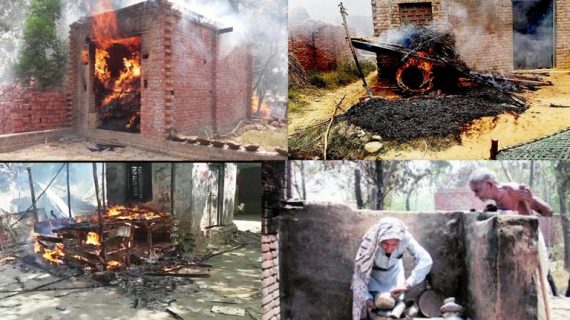 Saharanpur's peace didn't give some politicians the peace of mind

The violence in Saharanpur is a result of the BJP’s strategy to polarize voters with respect to Muslims. That’s their way of appeasing Jats unhappy with the treatment of their brethren in BJP-ruled next-door Haryana and of sowing discontent among Dalits aligned with Muslims

The inevitable fate of Justice Karnan

‘The allegations of corruption against high court and Supreme Court judges were serious, especially considering that they had come from a sitting high court judge. However, such mere allegations, with nothing to substantiate them, bring disrepute to the judicial system and lower its image in the eyes of the general public.’ Anurag Bhaskar and Hari Krishnan trace the fall of Justice Karnan 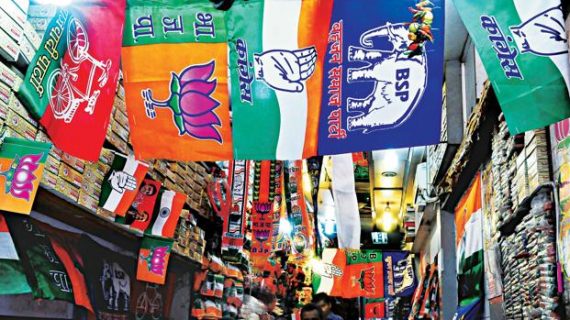 With the general elections round the corner, the leading political parties, the Congress and the BJP, are making new friends and enemies. Both know that their junior partners hold the key. An analysis of past vote shares of the regional parties reveals why this is the case