In 1936, Vinayak Damodarao Savarakar had said that at the most 20,000 to 25,000 people would embrace Buddhism along with Dr Ambedkar; and sooner or later most of them would return to the fold of Hinduism. The statement was made in the context of Dr Babasaheb Ambedkar making public his intention of adopting Buddhism in 1935. History proved Savarkar wrong. On 24 October 1956 more than four lakh people adopted Buddhism along with Dr Ambedkar. This ‘Dhamma Chakra Pravartan’ took place at Nagpur. Since then, this occasion is commemorated with great fanfare at the Diksha Bhoomi every year. When the Hindus celebrate Vijayadashmi, Nagpur dons a blue cloak. Lakhs of Buddhists congregate at Diksha Bhoomi proving Savarkar’s second prediction wrong – that most would return home after some time.

The month of October is famous for two events. Mahatma Gandhi’s birth anniversary, celebrated on 2 October and Dhamm Chakra Pravartan day, observed on Vijayadashmi. On 20 April 1936, Mahatma Gandhi had built a small hut at Shegaon village near Wardha. Today, that place is the sprawling Sewagram Ashram, which retains its old ambience and charm. Gandhiji had established his ashram near a Dalit-dominated village. About 70 km away from the ashram, lakhs of Dalits quit the Hindu religion, mainly to protest its hierarchical structure. While strains of ‘Vaishnav Jan to Tene Kahiye Jo Peer Parayee Jane Re” (One who understands the pain of others is close to God) rise from Sewagram Ashram, ‘Sangham Sharnam Gacchami’ is the theme song of Diksha Bhoomi. 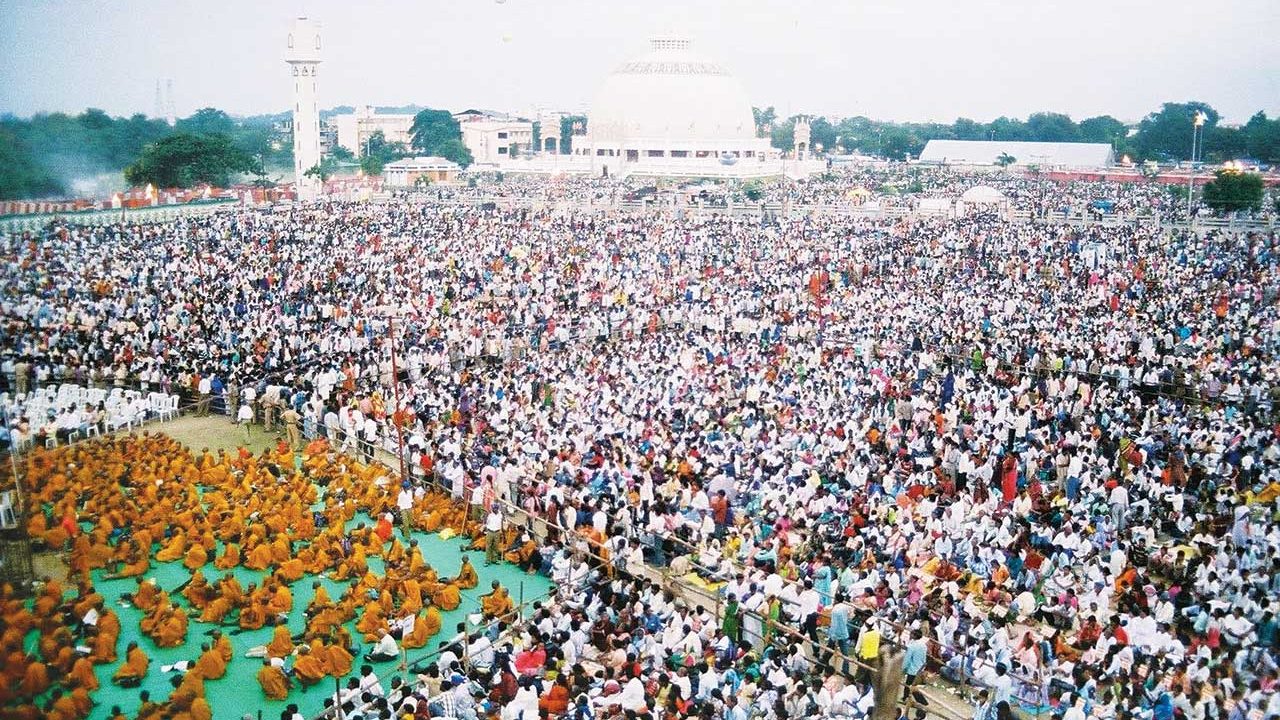 Some say that Ambedkar had chosen Nagpur for Dhamma Chakra Pravartan as the headquarters of RSS was located in the city. Ambedkar, of course, had refuted the idea the very next day of adopting Buddhism. He had attributed his choice of Nagpur to historical reasons saying that the city was native to the Nag tribe, which took on the Aryans with great valour.  The Rashtriya Swayamsevak Sangh (RSS), founded by Dr Kehsav Baliram Hedgewar, who was born in Nagpur and made the city the centre of his activities, has been expanding its influence and reach for the last eight decades. We will talk about the impact of this development on Nagpur later in the report.  We decided to conduct a case study about the impact of ‘historic October’ on this region for FORWARD Press. We tried to find out whether and to what extent the historic events of October still influence the views and traditions of the people of the area and how these manifest themselves. 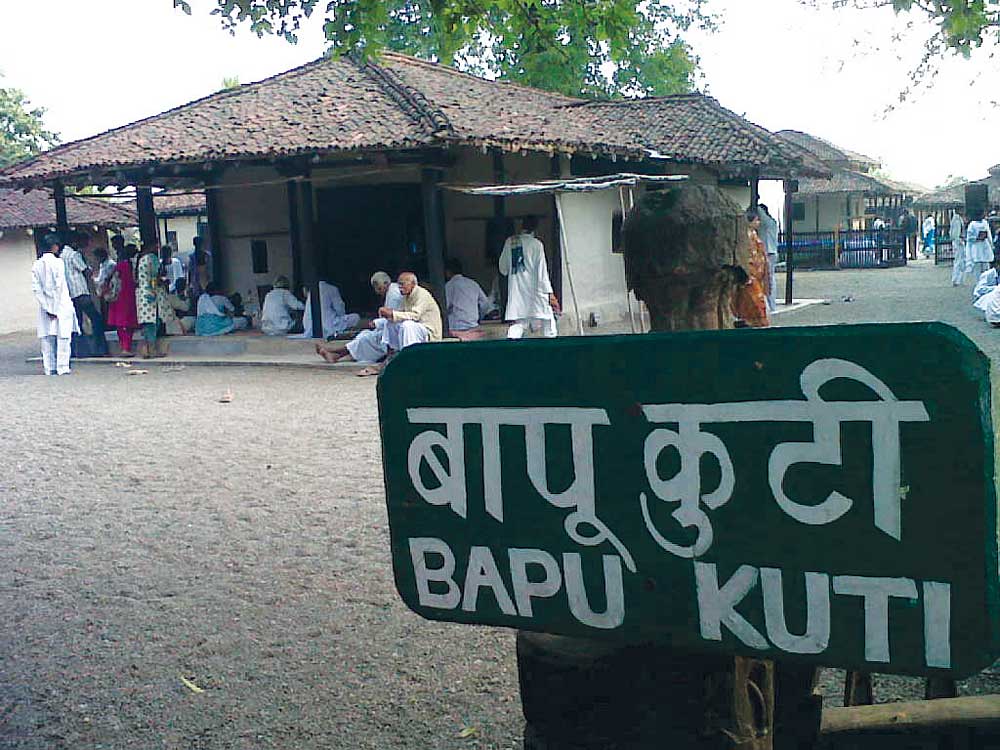 Sewagram Ashram has been in the news for all the wrong reasons in the recent past. Mahatma Gandhi’s spectacles were stolen from the ashram. But the most painful was the violence over salt in the ashram of Gandhiji, who used the symbol of salt to build a powerful people’s movement. The violent clash between the inmates of the ashram over salt even led to a court case.  It so happened that one day, during the community meals at the ashram, one inmate complained that the food was short on salt. This offended those in charge of preparing food and they assaulted the complainant. A violent clash between two groups of ashram inmates followed. Be that as it may, the function organised at the ashram on Gandhi Jayanti has become an annual ritual. Besides a couple of Gandhians from the city, government officials and members of the Congress party attend the function. Some school kids and college students are invited from educational institutions. This event pales in comparison with the Dhamma Chakra Pravartan day, where lakhs of commoners from all over the country gather to celebrate the occasion. A pertinent question is whether Gandhi and Gandhism have been confined to mutts and rituals. Says Avinash Kakde, an active member of the Sewagram Ashram Management Committee and a leader of Kisan Adhikar Abhiyan, “Gandhians have lost touch with the commoners though they do wield influence in the government and administration in the name of Gandhiji. That is why the people have little interest left in the ashram and its activities.”

Enthused by the huge turnout at Dhamma Chakra Pravartan day every year, Ambedkarite thinker and Republican Party leader Vimal Surya Chimankar says, “Enthusiastic participation of the people in this even associated with Dr Ambedkar and his ideology is significant. On Vijayadashmi, the RSS also holds a grand show at Kasturchand Park in the city, but it is the celebration of the ideological/religious revolution that draws huge number of Buddhist worshippers of Ambedkar.” At the same time, he is alive to the historical challenges Ambedkarite movement is facing. He is acutely aware of the stratagem of co-option being deftly used by the brahmanical establishment. According to Chimankar, when Savarkar’s prediction, made in 1936, proved wrong two decades later, the brahmanical forces realized that unless they take urgent and effective measures, Buddhism and Ambedkarism will rapidly gain strength. And they began their counter-campaign in right earnest. “In 1964, more than three lakh people were arrested and jailed during the movement demanding allotment of land to the landless under the leadership of Republican leader Dada Saheb Gaikwad. The Lal Bahadur Shastri government distributed two lakh acres of land among Dalits and landless. Two years later, Golwalkar comes out with his Bunch of Thoughts in which he describes the growing influence of Buddhism as a big danger. Gaekwad’s movement was the movement of Buddhist India – a movement for securing the social-economic rights of the people.” 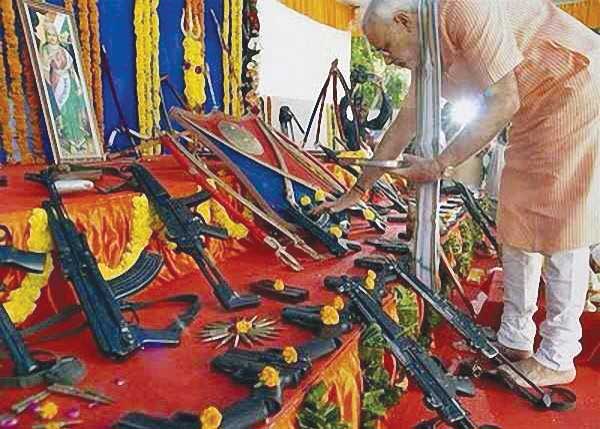 The RSS celebrates Vijayadashmi as a Shakti Puja Day and performs symbolic worship of weapons. This is what social worker Suresh  Khairnar says in this regard: “The first question is whether these weapons are licensed.” Though Khairnar insists that the Sangh’s ideology has no relevance in Nagpur as well as in the rest of the country the Sangh’s growing influence in Nagpur and Vidharbha is very palpable. BJP has managed to make deep inroads into the Congress fortresses in the region. Many say that in the 2014 elections, loyal Swayamsevak and former BJP national President Nitin Gadkari may score an easy victory from Nagpur. And many Congress leaders too are aiding in this endeavour from behind the scenes.

A fourth ideology – Communism – also has a Nagpur connection. According to CPI leader Jammu Anand, former CPI general secretary AB Bardhan and Sudham Deshmukh had met Dr Ambedkar on the eve of him embracing Buddhism and possibly were present at the function too, though Ambedkarite sources do not confirm this. A young Bardhan was returned to the Vidhan Sabha in 1977 from Nagpur, where trade unions once commanded a great influence. He is today a top Communist leader and thinker. CPI state secretary Dr Kango says that the influence of Communist party and its ideology had waned not only in the region but also in the country as whole.