One incident is etched on my mind. It was the Durga Pujaof 2002. My sister and one of her friends Swati had gone to see the puja. Now, of course, all sorts of things are available in markets close to the villages but that was a period of transition. The flow of consumer goods into rural markets had just begun and fairs, both religious and others, were favourite haunts of those who wanted to acquire something new for themselves. For every, say, five household goods, at least one decorative item or a toy for children was also bought. And that apparently useless buy was welcomed by everyone in the house – from the young to the old. Today, all sorts of bright, colourful and attractive things are available at the neighbourhood shop in every village. 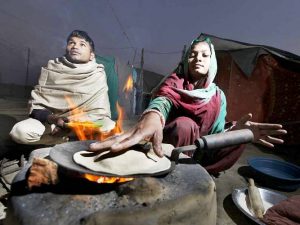 Be that as it may, my sister and her friend were enjoying the fair when suddenly my sister’s eyes fell on Mahalaxmi of Mushar Toli. She was shocked beyond words to discover that Mahalaxmi was wearing exactly the same sari as her. That was more than my sister could take. She abandoned her mela visit midway and came back home. And she tells me that she never wore that sari again.

This breaking down of the caste and economic barriers vis-àvis consumer goods left Swati dumbfounded. On the one hand, there was the unwritten rule that people of certain castes could not visit some homes wearing footwear. On the other, there was the situation that a Chandeshwar Mishra could forcibly ‘buy’ a pair of handsome bullocks tied outside the home of a person of any caste.

In folk life, there exists an elaborate set of dos and don’ts regarding consumption, based on the socio economic status of the person concerned, which are deeply entwined with its songs, myths, symbols, imagery, idioms, philosophy, way of thinking and metaphors – so much so that it is impossible to clearly identify them. The entire village believed that if Nathuni Mallah ate fragrant rice, he would vomit. We children did not even realize how and why we started teasing him, saying “Mahakaua chawal, Nathuni bhagal [Nathuni ran away when he saw fragrant rice].” Easing these deeply ingrained prohibitions is not an easy task – it requires prolonged sociological analysis. But one thing is certain; the capitalist and postmodern set-up has given birth to the ‘have money, will do’ culture. Obviously, it is painful for those who do not have money but it has also opened up a new world for those who could not use certain things under any circumstances, money or no money. But though the new world has opened up, the fact that it is based on one’s economic status is a major limiting factor, especially in areas where people do not know whether or not they will have something to eat the next day. Those who are prosperous can prepare diet charts and decide the menu of their lunch for the New Year’s Day by using the internet to research on the dishes available in different hotels; but those who live hand to mouth, do not know what, if anything, they will have
for breakfast the next day.

The dismantling of the consumption prohibition regime is most clearly visible in areas where affordability
is not a problem. Just see how the same songs are used for entertainment by people of different income groups, castes and religions. Some people describe this as mass culture. Whether it the New Year’s Day or a festival or any other occasion for celebration, the same kind of songs are played in the villages. Kamlu Mishra says that now, by merely listening to the songs being played or sung, it is difficult to guess in which tola a marriage function is being held. This situation may ultimately lead to the disappearance of folk culture. But then we should also remember that our ancient folk culture was not exactly a model that needs or deserves to be perpetuated.

Despite their talents, the artistes who participated in Ramleela and those from the Pamaria, Dafali and Chamar castes who used to play the shehnai on auspicious occasions were never much respected. In the
film Mirch Masala, there is scene where Naseeruddin Shah tries to woo Smita Patil by showing her a
gramophone.

Material assets also strengthen these tendencies, as the owners use them to display their superiority. I distinctly remember how, when villagers assembled to watch the serial Ramayana or a cricket match being telecast on Doordarshan at the house of some Babu, the proud owner of a TV set, the door was closed intermittently. The audience had to stare at the closed door, rather than the screen, till the door was re opened. Now, of course, on festive occasions, the villagers collect money among themselves and watch films the whole night. And most of those who indulge in this kind of celebration, ignoring the disapproval of the elderly of the community, are those whose only duty was to serve the ones above them in the caste hierarchy – those, who, in terms of a Maithili saying, were ‘below Brahmins but above Shudras’.

Times are changing, things are changing. The times are changing the things and the things are changing the times. Now, women cook food wearing slippers and men help them. Needless to say, it is imperative to preserve the positive traditional values which we have inherited from the long journey of the human race. There is a need to distinguish between doing away with the restrictions on consumption and drowning in the whirlpool of consumerism. (And it is unlikely that Bahujans will, for the millstone of bagfuls of money is necessary for drowning!). We must always remember that those whoare collecting twigs and leaves to light up their chulha in the evening are mostly unaware of the commercial that is running on TV at that time.