The mayor of Agra, Inderjeet Arya, is an epitome of courage, sacrifice and dedication. In a society where medieval caste-based traditions, divisions and psyche still persist, Arya’s rise from the downtrodden Valmiki community to the mayor of Agra has been remarkable. Excerpts of Rajiv Azad’s freewheeling, one-to-one conversation with the mayor: 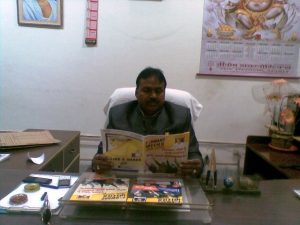 Arya’s father was a fourth-class government employee. He had to struggle day in, day out to make ends meet. Arya encountered many a hardship during his academic life, but he was determined to excel in life and achieve glory for his family and the Valmiki community, members of which are often either ignored or suppressed.

Life has never been a smooth ride

Life has never been a smooth ride for Arya. For sustenance, he did many odd jobs, including as a salesman
and a supplier of goods. He also had brief stints as a police constable in PAC and as a PTI with a school. (He was a wrestler during his student days and has played up to the regional level.)

Dalit icon Dr Bhimrao Ambedkar’s struggles were an inspiration to Arya and had a great impact on his life
and personality. Arya says: “Babasaheb was ostracized in school as he was from a Dalit community and during that period considered untouchable. Babasaheb used to sit under a tree in his school, away from his classmates.”

During his school days, Arya joined the BJP and was in several key positions before becoming the mayor of Agra, including ward president, president SC unit and pradesh mantri. Besides, Arya has also worked with the Bhartiya Mazdoor Sangh and Sewa Bharti. Why did he join politics? Arya says: “For me politics is a wonderful platform through which we can play a significant role in transforming the lives of people, especially those hailing from the economically weaker sections of the society, including Dalits.”

The caste system is so very entrenched in our social fabric that to scuttle the menace a lot needs to be done.
Awareness holds the key. A change in mindset of the people belonging to upper castes is required. Unless,
they start thinking that Dalits are also an integral part of the society, and are people just like them, caste system and caste-based discrimination can’t be overcome. Arya says: “I myself have experienced caste-based discrimination during my social and political life. Caste system is dividing our society. We need to overcome this shame and start living in harmony.” Message to youth and those who hail from Dalit communities If you are determined hardworking and noble-thinking, you are certain to accomplish your cherished dreams.