The enlightened class of Bahujans is yet to recover from the shock of the forces led by Narendra Modi almost annihilating the politics of social justice in the recent general elections. It cannot fathom how the brand of politics so dear to its heart would come back on the rails. In this depressing scenario, the nascent alliance between the RJD supremo Laloo Prasad Yadav and JD (U) leader Nitish Kumar in Bihar has come as a breath of fresh air for the supporters of social justice all over the country. Laloo Prasad has played the key role in forging this alliance. He is not only trying to rejuvenate the politics of social justice but has also emerged as a saviour of Nitish Kumar.

Circumstances have forced Nitish Kumar, who, 20 years back, had launched his political career with standing up to Laloo, to bow before the latter. Laloo also realized the gravity of the situation and did not disappoint Nitish. On 18 June, his party’s 21 MLAs extended their support to two candidates of JDU, thus averting, at least for the time being, the danger looming over the Manjhi government. As a quid pro quo, between 19 June and 1 July, the Manjhi government effected a major administrative reshuffle and also allowed all former Bihar chief ministers to hire 6 persons each for their personal staff. Laloo Prasad and his wife Rabri Devi are the biggest beneficiaries of this largesse. 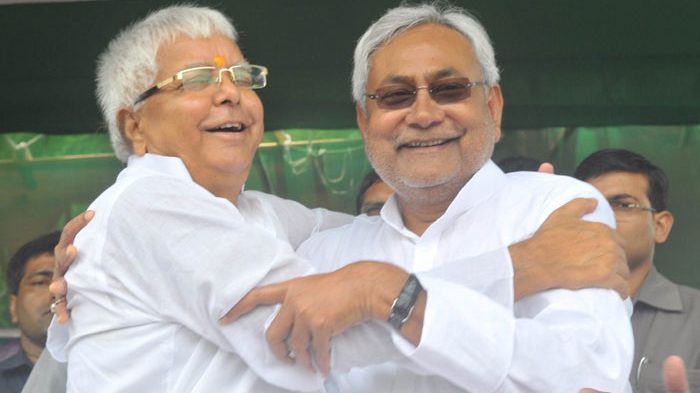 In fact, Laloo and Nitish had little choice but to join hands after the Modi Tsunami blew away both their parties at the polls. Both must have taken notice of the fact that while the BJP – in its best-ever performance in the state, garnered 39 per cent (1.3 crore) votes in the elections to the 16th Lok Sabha, the RJD-Cong combine got 1.2 crore and the JDU got 61 lakh votes. Taken together, their vote percentage was 47. Thus, had the RJD-JDU and the Congress-NCP contested the polls together, the number of non-NDA seats in Bihar would have been 28 instead of 9. It is in view of this electoral arithmetic that Laloo and Nitish are moving towards forging a poll alliance. The success or otherwise of their strategy will be revealed in the 10 assembly bye-polls, due in the near future.

The enlightened class of the Bahujan society is already looking forward to long-lasting results of the Laloo-Nitish alliance. It believes that if their unity gives a new lease of life to the politics of social justice, it would impact Uttar Pradesh too and that would, ultimately, usher in the Acche Din of social justice politics. In an indication of the new direction the politics of social justice may take in the future, Laloo Prasad Yadav said that only Mandal can be an effective antidote to Kamandal. To give a boost to Mandalwadi politics, Laloo demanded that the government should provide 60 per cent reservations to Dalits, Tribals, OBCs, MBCs and minorities in the private sector, government contracts and all developmental schemes. He also demanded that government aid and technical know-how should be made available to the economically weaker sections of the society. He even called upon his supporters to take to the streets in support of this demand.
It would be pertinent to mention here that after her party’s humiliation in the 2009 Lok Sabha polls, on 25 June, 2009, BSP supremo Mayawati too had announced 23 per cent reservation in government contracts but she committed a grave error by limiting that reservation to SCs and STs only. Mercifully, Laloo Prasad steered clear of repeating her folly. Some political analysts see Laloo’s announcement as an upsurge in the politics of caste. All said and done, what effect Laloo’s announcement has on UP and Bihar, only time will tell.

It was to counter the ‘caste consciousness’ that arose among the Dalitbahujans after the implementation of the Mandal Commission report that the Sangh Parivar, and particularly its political arm, the BJP, had launched the Ramjanmabhoomi liberation movement. The idea was to subsume the caste consciousness into Hindu religious consciousness. The Ramjanmabhoomi movement was eulogized by BJP veteran Atal Bihari Vajpayee as the biggest movement after the Independence struggle. If the Sangh could grab the Delhi gaddi more than once, it was at the cost of innumerable lives and property worth thousands of crores of rupees that were lost in the aftermath of the Ramjanambhoomi movement. It is significant that the BJP never allowed the campaign for politicization of religious consciousness – which it had launched to take on the politicization of caste consciousness – to slacken.

As a result, the Bahujan heroes / heroines, overcome by their desire to occupy the topmost post in the country, strayed away from the campaign of boosting caste consciousness. If, drawing appropriate lessons from the religious consciousness campaign of the Sangh, the Bahujan heroes / heroines had assiduously strengthened the process of politicization of caste consciousness, today the reins of power would have been in the hands of an Ambedkarite or a Lohiawadi. Nevertheless, as they say, better late than never. If, even now, Laloo-Nitish-Maya-Mulayam devote themselves to the task of the politicization of caste consciousness, the axis of power would shift and comfort-loving Kamandalwadis, who have been enjoying privileges for centuries, would have little to do except twiddling their thumbs.