The assault on FORWARD Press in Delhi for allegedly ‘hurting’ the sentiments of Hindus is an act of cowardice and intimidation by the Delhi police.  It is utterly shameful that police acted on a ‘complaint’ by elements of the ABVP, which rarely believes in the rule of law, to intimidate the magazine.. The basis for their complaint was some art depictions of the Bahujan version of the Durga-Mahishasur myth.

India celebrates the killing of Mahisasura and his ‘friends’ or so called demons by Durga as Durga Puja. There are hundreds of stories linked to all these mythologies and different parts of India celebrate it in different ways. In fact, Mahishasur is an icon in many tribal areas of West Bengal and Assam.  Similarly, the common people of Maharashtra celebrate Diwali for the prospect of a future king ‘Raja Bali’.  There are songs about the coming kingdom of Bali, where everyone will prosper and there will be equality. Similarly, Ravana is an icon for many despite being portrayed as a villain and symbol of ‘adharma’ by the Vaidik Hindus.

As a freethinker and an Ambedkarite, I do not subscribe to theory of my ‘mythology’ is better than yours or my God is better than yours when the entire edifice of God need to be challenged to save the future generations of India from exploitation of the priestly classes.  It is therefore important to challenge them as well as expose them.  Yes, many of the stories are inspiring despite being part of these mythologies and can be used too pin point the discrimination based on caste and gender in our society.

For me the best of the expose came from Dr Babasaheb Ambedkar, whose Riddles of Hinduism is a masterpiece to understand the real meaning of mythologies. The interesting part is that in Ambedkar’s analysis of the riddles of Rama and Krishna he did not opt for a new theory but based his analysis on the popular legends about them. For Ambedkar, it was important that we learn our lessons from history and delink ourselves from those mythologies and ‘holy” texts which degraded us. It is therefore essential in Ambedkar’s world view that those who want to be part of his ‘Navayana’ or new way must relieve themselves from the old path imposed upon them from the brahmanical texts. The identities that we are in today are not invented by us. We did not give ourselves our names, caste and religion but the people who wanted to control our thoughts and life thrust them upon us.  History is not always great and golden but unfortunately some time glorification of these mythologies tends to make us feel like that. Ambedkar never believed in that and opted for a more egalitarian and democratic way of life which he defined in his 22 vows when he embraced Buddhism with millions of his followers. 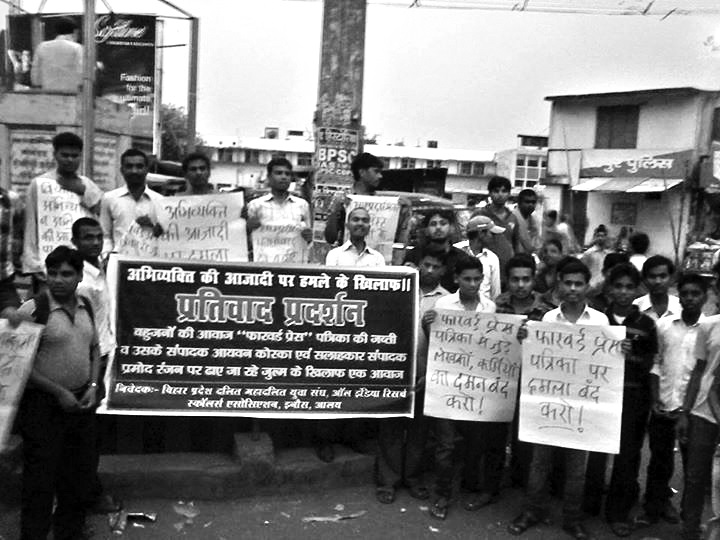 There are certain dangerous things, which have emerged during the entire debate on the FORWARD Press issue and the raid on it.  There were people who raised the issue on the contents of the issue and suggested that the magazine has a hidden Christian agenda and the contents inside it need to be carefully scrutinized. There were Ambedkarite friends, who after reading one article on Dr Ambedkar’s conversion to Buddhism, actually felt hurt and I can say reasonably so because the author had used insensitive languageThere were many who felt that this magazine is Christian propaganda against Buddhists and Communists while others claimed that it was tilting towards the BJP and Hindutva in the name of caste identities! These are sad because some times it actually changes the entire discourse and comes in handy for those in power, who are actually afraid of this freedom.

In the intellectual arena we must have discussions, which are seasoned, as well as reasoned. It does not have a space for rumors and backbiting.  We are here into the struggles at our own and Forward Press has the capacity to defend itself. Even if is propagating Christian agenda which I disagree at the moment, there is no reason not to allow them when each one of us is having our own agenda.

Secondly, right now, the issue here is not of the contents in the magazine which can always be debated and all including me need not to agree with all the contents, but the question of freedom to question and express.  For instance, I never liked the idea of Beef Festival despite the fact that I defended the right of people to eat food of their choice. Similarly, I have never ever supported the ideas of countering mythologies through mythologies and creating a new ‘God’ but I stand with my firm conviction that these mythologies need analysis so that people of this country and rest of the world understand the crookedness behind them.

While Dr Ambedkar, Jotiba Phule and Periyar did expose the brahmanical cultural imperialism over the Dalitbahujans yet it is also important for us in the greater interest not to close the debate. There are young scholars who are writing extraordinarily and have actually gone further but it is also important for us to understand that communities should delink themselves with the traditional customs and everything cannot be defended in the name of culture and tradition. Hence, I am not for a temple to be built in the name of Mahishasur or anybody else, but at the same point of time if his ‘followers’ want to build it, they must have the freedom to do so even if personally or ideologically people like me stand against creation of a new God.

Therefore, the criticism on the contents may be valid but deviate from the real issue of threat to ‘freedom of expression’ which is very much evident from the fact the way the staff and editors of Forward Press were intimidated by the authorities.  Whether the editors of Forward Press agree or not, one feels that in the healthy democracy the writers and authors have even right to offend the religious texts and religious feelings. The clause ‘offending the religious sentiment’ of the people is itself the biggest threat to the freedom of expression in India. We have seen how M.F.Hussain was hounded out from India and the government of the country could not save him.

It is important to understand such people who have gone berserk after the new government took over. They are challenging everyone who is considered to be a dissenter. It is not the government but the lynch mob kind of people who feel that the dissenters are a trying to defame India. Just when the news of detention of the staff and raids at the offices of FORWARD Press reached me, I was in Mehsana district of Gujarat and was travelling towards Kutch region that day with some of my friends from abroad who had come to participate in a conference there. I was sharing this incident with them who were shocked but soon an Indian friend travelling along started virtually hitting on ‘seculars’ for defaming Hindus.

I have always felt proud in associating with Forward Press, which I felt among very few journals of market standards, as well as where you can express your opinion freely and candidly even if the editors disagree with the contents and that was the reason of my continuously standing with it all the time. It is doing a great service in the Hindi heartland for the younger Dalitbahujan masses but it remains a thoroughly professional magazine and has refused to be a mouthpiece of any political party. In fact, it has fast become the voice of Dalitbahujan communities.

Those who tried to intimidate Forward Press will not succeed as an idea cannot be countered through threats of physical violence and state repression. An idea has to be countered through a better idea. These are difficult times and the issue here is purely our right to free choice and freedom of thought; ignoring it would be too detrimental to the health of democracy and the Dalitbahujan movement. This is the time to stand and to be counted among those who oppose any policing and intimidation on our socio-political thoughts as today it is Forward Press, tomorrow it may be you too.