The city of the Taj is in the news these days. On 8 December, in the Ved Nagar area of the city, around 150 members of 57 Muslim families were allegedly converted to Hinduism at a function organized by RSS associates Bajrang Dal and Hindu Jagran Manch. The neo-converts have been living in the slum cluster in Ved Nagar for the last 15 years or so and make a living by scouring the garbage dumps for saleable things. Most of them hail from different districts of West Bengal.

When the news about their conversion was published in newspapers the next day, all hell broke loose. Before the news appeared in the papers, even the converted people did not know that they had switched religion. They protested and said that they had been converted forcibly or had been lured with incentives. 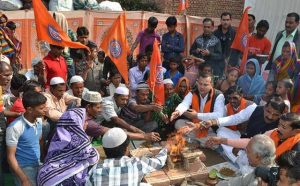 According to Ismail, one of the “converts”, for the last month or so, activists of the Hindu Jagran Manch had been talking to the Muslim residents of the slum and persuading them to become Hindus. A day before the conversions, the activists told them that a camp was being organized in their area for making voters’ ID cards, and that Aadhaar cards and ration cards would also be given to those who didn’t have them. The foundation stone of a Kali temple would be laid on the occasion, said the activists. The offer of voters’ ID cards and ration cards was too tempting to turn down, and almost all of them reached the designated place. To their dismay, there was no such camp. Instead, a religious function was underway to mark the beginning of the construction of the Kali temple. The men were made to wear skullcaps and everyone was asked to join in the ‘havan’. They joined in, albeit unwillingly. Afterwards, photographs of them holding idols of Kali were taken. When some women objected to being photographed, they were pacified by promises of money in return.

Next day, when the newspapers published reports of 200 Muslims embracing Hinduism, the slum dwellers were shocked. The women started wailing while the men were angry. Ismail himself went to the local police station and got a case of forcible and fraudulent conversion registered. Though the names of the people who were present at the havan were mentioned in the complaint, the Hindutva organizations, very shrewdly, managed to save themselves. Only Kishore Valmiki, a local Bajrang Dal activist, and some of his associates were named as accused in the FIR.

Ajju Chauhan, district president of Bajrang Dal, dismissed the charge that force or deception was used to persuade the Muslims to convert. “These persons had genuine faith in Hindu religion and they have become Hindus out of their own free will. Their ancestors were also Hindus,” Chauhan said. The “converts”, however, insist that they don’t follow the Hindu faith. They were deceived into joining the havan and were declared Hindus. One of the victims of the fraud, Sufia, said that her family had been Muslim for the last several generations. “I am not aware if my ancestors were Hindus at any time”, she said. Another woman Sakina recited Ayats from the Quran and said that there was a copy of the holy book at her house. “I did not want to change my religion,” Sakina said. “I had gone there for getting a ration card.” Since most of the people performing the havan were Dalits from the neighbourhood, people she knew, she joined in.

The issue soon turned into a row. The Muslims of the city opposed this forcible conversion and demanded arrest of the accused. According to Sulabh Mathur, SSP of Agra, many people have been made accused in the case. A magisterial enquiry has also been ordered. He said that strict action would be taken against those found guilty.

Champat Rai, international vice-president of the Vishwa Hindu Parishad, who described this conversion as a “homecoming”, was looking at bringing back one lakh such Muslims and Christians, whose ancestors were Hindus, into the Hindu fold by the end of last year. VHP sources claimed that there was nothing new in such conversions. The VHP organizes such “homecomings” of Muslims and Christians every year. In 2013, according to him, the VHP had held similar functions at Badaun, Bijnore, Bareilly, Kasganj, Shahjehanpur, Mainpuri and Firozabad districts in which thousands of Muslims and Christians were brought back into Hinduism.

The issue rocked Parliament too. From 11 December onwards, the opposition parties did not allow Parliament to function and demanded the prime minister’s explanation. The government, however, disassociated itself from the controversy. Minister for Parliamentary Affairs Venkaiah Naidu said that the government was contemplating enacting an anti-conversion law. This was, however, opposed by the members of the opposition parties who said that there should be no ban on conversions. According to these parties, it should be left to individuals and families to decide which religion they want to adopt and practise.