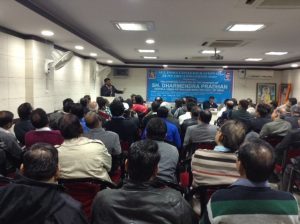 NEW DELHI: The All India SC/ST organization held a felicitation function at Connaught Place. While Union Petroleum Minister Dharmendra Pradhan was the chief guest, chiefs of all prominent Dalit organizations attended the function, which aimed at drawing the attention of the government towards Dalit issues. Among the Dalit leaders present were B.S. Bharati, A.P. Singh, Manoj Gorkela, Mahendra Singh Badgujar, C.B. Rawar, and heads of the unions of Delhi Electricity Board, Income Tax department, Indian Railways, LIC and different banks. Ways to solve the problems of the lower class and their political and economic empowerment were discussed at the function. The speakers stressed that unless Baba Saheb Ambedkar’s thoughts were put into practice, the social status of the depressed classes would not improve.