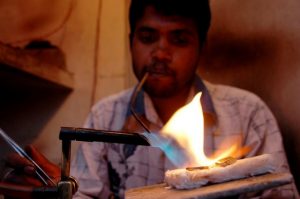 AURANGABAD (Bihar): The birth anniversary of Narhari Sonar was celebrated with a ‘Adhikar Maha Rally’ at Gardinibagh in Patna on 3 February. Almost 10,000 people from different districts joined the rally. Addressing the rally, former Bihar deputy chief minister Sushil Modi said that the profession of Swarnakars was full of struggles and risks. He said that it was generally believed that the Swarnakars are rich but that the artisans and labourers among them are ten times the number of those who are prosperous. JD-U leader Lallan Sarraf said that the demand of the Swarnakars for their inclusion among the EBCs was entirely justified. Instead of OBC, he said, they should be classified as EBC. A souvenir was also released on the occasion. Among others, National President Kiran Verma, State President Arun Verma, and General Secretary Ashok Verma were present at the function.