“Adivasis live in forests. The government has declared that all of them are terrorists. You have committed a grave blunder by coming to an Adivasi area. They are neither humans nor animals. They are shaitans, shaitans! [They are devils, devils!]”

“We have come here to make human beings of these shaitans. We have devoted our entire life for this cause”.

This dialogue of Hindi feature film MSG-2, directed by Sant Gurmeet Ram Rahim Singh of Dera Saccha Sauda, triggered a wave of anger among the Tribals of the country. They protested in different ways across the country, demanding a ban on the film and legal action against its producer and director, and against members of the Censor Board. They also approached the courts. Worried about their tribal vote bank, the BJP governments of Madhya Pradesh, Chhattisgarh and Jharkhand banned the film. But the central government did not take any action. And the Delhi High Court’s judgment on this issue has brought this question to the fore: “Are Adivasis really ‘shaitans’?” In fact, even more shocking than the attitude of the central government and of the Central Board for Film Certification (Censor Board) was the judgment of the Delhi High Court. Prem Mardi, a resident of Ghashila, Jharkhand, had filed a writ petition in the court seeking cancellation of the certification of the film and legal action against its producer and director. Justice Rajiv Sahai Endlaw delivered a rather bizarre judgment while rejecting the petition. He said that the petitioner had used the word “Adivasi” to refer to the members of Scheduled Tribes and thus argued that the film spread hatred against the STs. “As per my understanding, Adivasi connotes aboriginal people and not people falling within the definition of Scheduled Castes and Scheduled Tribes in Articles 341 and 342 of the Constitution of India. However, to verify this, I checked the meaning of Adivasi and found it defined as ‘people living in India before the arrival of the Aryans’. To be sure, I also read the Constitution of India in Hindi and did not find the word Adivasi being used in Articles 341, 342 and 366 in place of the word ‘tribe’. The word used for the word tribe therein is ‘janjati’.

“The word ‘Adivasi’ does not mean ‘tribes’ or ‘Scheduled Tribes’ but refers to the earliest inhabitants of any land, be it India or any other country in the world. I find the term ‘Adivasi’ being used for the earliest settlers of the lands now known as Bangladesh, Nepal and Sri Lanka. Similarly, the aborigines of America would also qualify as Adivasis. The reference in the film to Adivasis is not found to be relatable in any manner to Scheduled Tribes. There is thus no merit in the petition. Dismissed,” the judge wrote.

No end to the bizarreness

The Delhi High Court’s judgment raises many questions. The judge said that Adivasis lived in India before the arrival of the Aryans. Where have they gone now? Are they living in Bangladesh, Nepal or Sri Lanka? If we are to go by the honourable judge’s reasoning, the Adivasis of Bangladesh, Nepal, Sri Lanka, America and Africa are “shaitans”. What kind of mentality is this? Is the judge biased or simply uneducated? Before delivering his verdict, he did not care to read an important judgment of the Supreme Court delivered by Justices Markandey Katju and Gyansudha Mishra in the case of Kailash and others versus State of Maharashtra (CA No 11/2011, SLP (C) No 10367/2010) in which the judges have used the words Tribal, Scheduled Tribe and Adivasi interchangeably.

In the debates in the Constituent Assembly, Jaipal Singh Munda, Jawaharlal Nehru, Sardar Vallabhbhai Patel, Dr Bhimrao Ambedkar, etc used the words Adivasis, aboriginals, Tribals and Scheduled Tribes. In the draft Constitution of India, the word “Adivasi” was initially used in Article 13(5) and then removed at the instance of Ambedkar. In addition, these words have been used in anthropological studies, history books and in documents prepared by the Planning Commission and state governments. But despite that, the judge dismissed the petition arguing that “STs” and “Adivasis” have different meanings.

What is interesting is that the film MSG-2 brands Advasis as “shaitans” and portrays Gurmeet Ram Rahim Singh as an “insaan” (human being) who has devoted his life to making “insaans” of these “shaitans”. There is nothing new in this assault on the identity and existence of Tribals. It has been happening for thousands of years. It began with the Aryan invasion of India. The Aryans raided the tribal areas and destroyed their civilization. They declared that they were “devas” and “surs”, and that they were superior, pure and civilized, while branded the Tribals as “asurs”, demons, barbarians, etc. Then, when Mughals came, they too considered the Tribals as demons and barbarians.

The British introduced the spectre of development and, after depriving the Tribals of their sources of livelihood, branded them as hungry, semi-clad, poor, helpless, uncivilized, criminals and marginalized. Gandhi referred to them as “girijan” (hill dwellers) and Ambedkar called them uncivilized. The Sangh Parivar said the Tribals are “vanvasis” (residents of forests) and launched an organized campaign against them. Thus began the use of the word “vanvasi” for Tribals, because the Aryans wanted to establish themselves as the original inhabitants of this country. The Total Revolution of 1974 brought with it a flood of NGOs and outsiders to the tribal areas. They began claiming that they had devoted their lives to the welfare of the Tribals. Despite these messiahs coming to their rescue, the Tribals remained where they were. Governments, NGOs and non-tribals branded Tribals as hungry, poor, helpless, backward, uncivilized and earned name, fame and money for bringing about their “development”, making them part of the “mainstream” and giving them a “better” life. MSG-2 is a part of this stratagem.

Fearful of losing votes, the BJP government of Jharkhand was the first to ban the film. What Jharkhand Chief Minister Raghubar Das wrote on his Facebook page after ordering the ban is shameful and ample proof that the Sangh Parivar wants to usurp Tribals by effacing their identity and distinct existence. He wrote, “No one in the state will be allowed to play with the sentiments of tribal, vanvasi brothers and sisters…the film MSG-2, which uses unconstitutional and objectionable language about the tribal brothers and sisters, will not be allowed to be screened in the state.” But using the word “vanvasi” for Tribals is also insulting and abusing them. That is because Aryans and Mughals also described them as “junglee”, which means backward, barbaric and uncivilized.

By branding Tribals as “shaitan”, MSG-2 has launched a well-planned attack on the identity and existence of Tribals. Gurmeet Ram Rahim Singh knows that no matter how bitter his attack on the Tribals is, the central government won’t take any action against him because Prime Minister Narendra Modi has himself made words like “vanbandhu” (friends of forest) a part of the officialese. Modi uses the word “Dalit” for SCs but he carefully refrains from using the word “Adivasi” for STs. That is because his masters – the controllers of the saffron brotherhood – have been running a campaign on a war footing for several decades to destroy the identity and existence of Tribals by addressing them as “vanvasi”. And that is because once the word “Adivasi” (literally original inhabitants) is accepted, the non-tribals, who are in a majority, would automatically become outsiders.

But will this verbal jugglery change the important judgment of the Supreme Court, delivered on January 5, 2011, in which the court said in no uncertain terms that the 8 per cent Tribals are the original inhabitants of India and the remaining 92 per cent Indians are the descendants of immigrants? The court also said that unlike non-tribals, the Tribals neither cheat or loot anyone, nor do they lie – that their character is superior to that of the non-tribals.

MSG-2 has once again proved that non-tribal Indians nurture a deep hatred of the Tribals and are biased against them. They aren’t interested in freeing themselves from these negative notions. It is high time that Gurmeet Ram Rahim Singh, Sangh brotherhood and the non-tribals reflected on who is actually uncivilized, characterless, asur, barbaric and a “shaitan”? One thing is certain, though: If tribals are “shaitans”, then no one in the world can be “insaan” because the tribal world view comprises the finest human values – equality, team spirit, liberty, fraternity and justice. Those who boast of being superior, civilized, educated and developed have a lot to learn from the Tribals. 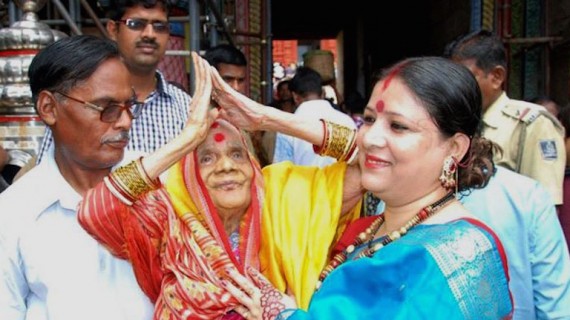 For centuries, Hindu temples, supposed to be the abode of the gods, were places where priests and upper-caste ‘pilgrims’ sexually exploited helpless women