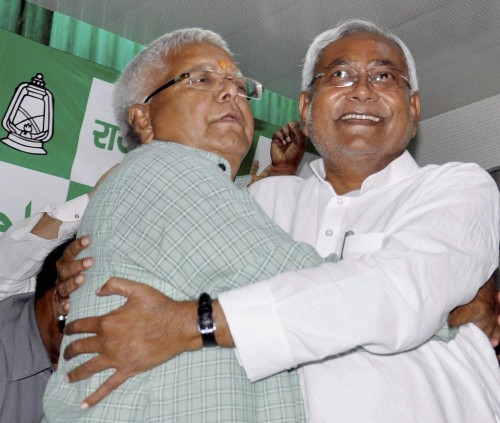 The long suspense about the Bihar elections ended when the JD(U)-RJD-Congress alliance, popularly referred to as the “Mahagathbandan” (Grand Alliance), pulled off a stunning victory. The alliance swept the polls, winning 178 seats and 42 per cent of the votes. Restricted to only 58 seats with 34 per cent votes, the BJP-led NDA has been trounced. This was quite clearly a bi-polar contest. The other parties, namely Samajwadi Party, Pappu Yadav’s Jan Adhikar Morcha, the Nationalist Congress Party and the Bahujan Samaj Party, were completely marginalized. The independents and smaller parties together polled 23 per cent votes and managed to win only 7 seats.

The Grand Alliance’s spectacular victory was the result of the impressive performance by each of the three constituent parties. Of the 101 seats contested, the RJD managed to win 80, while of a similar number of seats contested, JD (U) managed to win 71. The Congress, which contested 41 seats, managed to win 27 – a huge improvement over its tally of four seats in the previous assembly. When this alliance was formed, there was speculation that it might not work on the ground as the core supporters of the JD (U) and RJD could end up not voting for the alliance partners. This victory has put to rest all such speculation. A successful transfer of votes by the alliance partners to each other gave the Grand Alliance such a massive victory.

The heavy defeat suffered by the NDA is not only because of the dismal performance of the smaller allies. Even the BJP fared poorly. Of the 160 seats that BJP contested, it managed to win 53 with 24 per cent votes. Though BJP ended up with the most votes (24 per cent) for a single party – simply because it contested the most number of seats (160) – its vote share declined by 5 per cent compared to the 2014 Lok Sabha election. This is a continuation of the trend witnessed in each of the five assembly elections held after the 2014 Lok Sabha Election. It is important to note that in terms of seats, the BJP has been reduced to the third position, with RJD at No 1 and JD (U) at No 2.

Among BJP’s allies, the Lok Jan Shakti Party (LJP) managed to win just 2 of the 40 seats it contested, while from the 20 seats that Hindustan Awam Morcha contested, Jitan Ram Manjhi emerged as the lone winner. Similarly, Upendra Kushwaha-led Rashriya Lok Samata Party (RLSP) won only 2 of the 23 seats it contested. Not only did the allies fail to transfer votes to each other, it seems that the NDA failed to consolidate the Dalit vote as it had hoped to, with two Dalits leaders, Ram Vilas Paswan and Jitan Ram Manjhi, and their parties in the alliance.

The verdict is clearly a vote for development – not for the development that Prime Minister Narendra Modi promised, but for the development work done by the Nitish Kumar government in its last two terms. The results of the Bihar Assembly Election should not be seen as merely the victory of caste alliance and electoral arithmetic crafted by the JD (U), RJD and Congress. Even the section of voters who voted for the Grand Alliance because of their caste firmly believed that in the past, Lalu Yadav had been instrumental in giving them a voice, self-respect and pride. These voters attached a different meaning to development from their own dictionary.

Initially, both the NDA and the Great Alliance based their campaign on issues related to development and economy, but soon caste and religion became the focal point. Findings from a post-poll survey, conducted by the Centre for the Study of Developing Societies (CSDS), clearly indicates a much sharper polarization of the voters along caste lines in this election compared to the last assembly election. The data presented in Table 2 clearly shows that in comparison to the last assembly election, the 2015 election saw an 8 per cent increase among respondents who said that caste was more important to them. This view cuts across voters of various castes, especially those from the upper castes.

The voters weren’t just divided along caste lines. Class also clearly affected voting preferences (See Table 3). In a state where approximately two thirds of the population is poor and lower middle class (based on assets owned, house type and household income), the Grand Alliance had a massive advantage. The NDA, on the other hand, primarily got the votes of middle and upper middle classes: 52 per cent of the upper-middle-class votes and 36 per cent of the middle-class votes. The Grand Alliance was extremely popular among the lower-middle-class voters: 46 percent voted for it. The dramatic verdict seems to have successfully communicated that a socially inclusive agenda that addresses the needs of the downtrodden has a greater electoral appeal than rhetoric of a development model lacking details.

The long, five-week campaign seems to have made a huge impact on the electoral outcome. The NDA was certainly ahead in the electoral race when the elections were announced but lost the momentum during the campaign that followed. With every passing day and week during the campaign, the NDA kept losing its popular support while the Grand Alliance kept gaining ground. As the campaign progressed, BJP’s promises of development gave way to personal attacks. This did not go down well with the voters of Bihar.

What turned out to be the game changer were RSS Chief Mohan Bhagwat’s statements regarding need for a fresh look into the issue of reservation. These statements created uncertainty in the minds of the OBCs and Dalits, the beneficiaries of reservation. The lower OBCs, who seemed somewhat divided at the beginning of the campaign, voted overwhelmingly for the Grand Alliance, which had championed the cause of reservation for the OBCs. Thus the campaign resulted in a shift among the lower OBC and Dalits away from the BJP, and the massive consolidation of the Yadavs and the Kurmis in favour of the Grand Alliance. The reality is that there is sizeable support in Bihar for the policy of caste-based reservation. Hence, Bhagwat’s statements turned the tide against the BJP.

The centralized nature of BJP’s campaign also seem to have cost the NDA. The party went into the campaign with their two popular faces, Prime Minister Narendra Modi and the party president Amit Shah. As was obvious from the posters and the hoardings put up during the campaign, the local leadership was completely sidelined. The Nitish-Lalu duo used this to their advantage, and made “Bihari” versus “Bahari” an issue of their campaign. The BJP may also have suffered due to their policy of not declaring the chief ministerial candidate. If these were not enough, the soaring prices of pulses angered a section of the voters. They blamed the central government more than the state government for this and decided to vote against the NDA.

Now, this victory of the Grand Alliance is sure to open possibilities of alliances between non-BJP parties in the future. We might see some early signs in that direction as four states go to the polls in May 2016. This rout will also force the BJP to introspect about what went wrong with its campaign strategy. The bigger question though will be about BJP’s inability to win elections when faced with a united opposition.

Table 2: Caste vs development – what mattered more to the voters?

Table 3: The class divide in the support base of political parties

Fieldwork was conducted after voting ended in each phase. Trained field investigators asked respondents a set of detailed questions in a face-to-face interview lasting 20-25 minutes. The achieved sample largely matches the demographic profile of Bihar. The data file used for analysis was weighted by the actual vote share secured by the major parties.

The fieldwork was coordinated by Prof Rakesh Ranjan (Patna University) and supervised by Vijay Kumar Singh (V M College, Pawapuri). The survey were designed and analysed by a team of researchers at CSDS, Delhi, led by Sanjay Kumar, director, CSDS.

Sanjay Kumar is a professor and currently director, Centre for the Study of Developing Societies (CSDS). Views expressed are personal