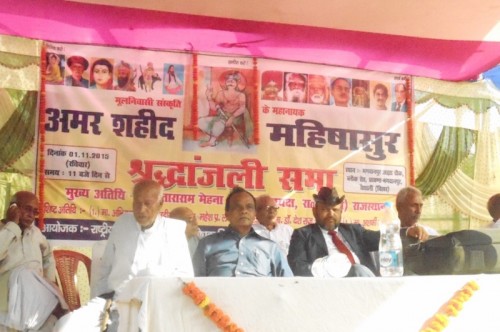 When, on 25 October 2011, a handful of students of Delhi’s Jawaharlal Nehru University celebrated Mahishasur Martyrdom Day for the first time, no one could have imagined that the movement would spread like wildfire. In just four years, these events have not only created a nationwide stir but have provided a common basis for unity between Tribals, OBCs and Dalits. This year (2015), Mahishasur Martyrdom Day or Mahishasur Remembrance Day was celebrated at more than 300 locations in the country. This is not all. The new tradition has crossed the country’s borders and reached Nepal, too.

The size of the events, which went unnoticed by the mainstream media, ranged from 10-15 enthusiastic youths holding placards to huge public meetings attended by 1,000-20,000 people. These events clearly show that through them, the Dalit identities of India are writing their new cultural history.

Durga Puja, which is a celebration of Durga’s victory in the battle between gods and demons, no longer enjoys unquestioned acceptability. Those who celebrate Mahishasur Day say that it was a battle between the Aryans and the non-Aryans, and as non-Aryans, Mahishasur is their ancestor and hero. Mahishasur, who was the mythical hero and god of the Tribals, is now being described as a martyr by members of the deprived Bahujan communities like Yadav, Kushwaha, Kumhar, Kurmi, Nishad, Manjhi, Rajak and Ravidas.

Talking to the organizers of Mahishasur Day functions in different parts of the country was a novel experience for us. Each of them had many things to say, but they had many things in common that drew one’s attention. Almost all of them said, “From our childhood, we used to wonder why the Asurs in idols of Durga resemble us in looks and why the body type and clothes of those who killed Asurs were similar to today’s Dwijs!” Subsequently, when they thought about it and went about exploring, they were in for a surprise. They discovered that many Asur traditions relating to Manuj Dewa, Maikasur, Daityera, Karas Dev, etc were alive around them and in some cases, in their homes. Some organizers believe that Mahishasur was not a mythological figure. He was a historical personality – the protector of their clan, a valiant king and people’s hero. All of them are against worshipping Mahishasur and do not follow any rites or rituals, which is probably the real strength of these events.

In the last four years, this event has also assumed a form of cultural politics. It is being organized not only on campuses of prestigious universities but also in remote villages and towns. The state governments are aware of the development and at many of these functions, they have provided security.

Mahishasur is linked with the ancient culture of India’s primitive “Asur” tribe. The strength of this tribe now is barely nine thousand. Few among them are literate. Anil Asur, a social activist who lives in Vishunpur sub-division of Gumla district, says, “I have read in my schoolbooks that the gods had killed Asurs. Those were mass murders of our valiant ancestors.” Ashwini Kumar Pankaj, editor of Johar Dishum, published from Ranchi says, “Those who insist that Mahishasur was a villain should understand that he is the hero of Tribals, OBCs and other deprived sections.” According to Pankaj, this year Mahishasur Day was celebrated at more than 350 places in the country.

According to those who celebrate Mahishasur Day, after the murder of Mahishasur by Durga and other gods, his disciples held a huge public meeting on Ashwin Purnima in which they vowed to preserve their egalitarian culture and win back their lost glory. That is why in most of the places the functions are held on Ashwin Purnima. This Purnima (full moon day) falls on the fifth day of Dussehra.

Come, join us in sampling the Mahishasur-related celebrations to understand their nature. Owing to time constraints, we haven’t been able to draw up a list that is representative of the regional diversity. Nevertheless, it does give us a glimpse: 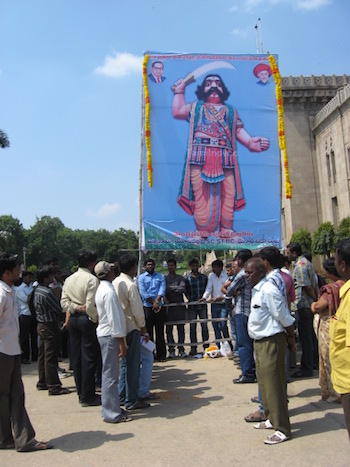 Several other people are involved in educating the people of Bihar about Mahishasur by organizing martyrdom/remembrance days: Advocate Manish Ranjan, journalist Nawal Kishore Kumar and Rakesh Yadav in Patna; Abhunandan Kumar in Supaul; Ramnaresh Ram and Pradeep Yadav in Sewan; Birendra Gupta in East Champaran; Raghunath Mahto in West Champaran; Chandrika Sahu in Shivhar; Ramshreshtha Rai in Sitamarhi; and Radhakrishna Das, the mahant of Thawe temple, in Gopalganj. Similarly, at Jugwa, in Kaushambi, Uttar Pradesh, N.B. Singh Patel and Ashok Vardhan hold a large function every year. Last year, they announced that their village would be renamed “Jugwa Mahishasur” and that a signboard with the new name would be installed. Others parts of Uttar Pradesh also have been witnessing Mahishasur Day celebrations, courtesy of Kamal Patel and Surendra Yadav in Mirzapur; Laddu Singh and Rammanohar Prajapati in Allahabad; Mohit Verma in Banda; and Krishnapal, Arvind Gaud and Ripudaman Sahu in Benaras. The Mahishasur Day celebrations have begun in Mysore, Karnataka; Hyderabad, Telengana; Morari colony, Balaghat, in Madhya Pradesh; and in many cities and towns of Odisha. The functions organized by Swapna Kumar Ghosh in Purulia, West Bengal, and by Narayan Bagarthi, in Kalahandi, Odisha, have got ample media coverage. Outside India, there’ve been reports of the celebrations from many places in Nepal. However, due to a lack of time, we could not contact their organizers.

(The article was coauthored by Ravi Prakash, who is a multimedia journalist regularly on assignment for BBC Hindi and Doordarshan. He has been resident editor, Deoghar, of Prabhat Khabar; editorial head at Dainik Jagran, Kolkata; deputy editor at Dainik Bhaskar, Ranchi; and the editor of inext’s Ranchi, Patna, Agra and Jamshedpur editions.) 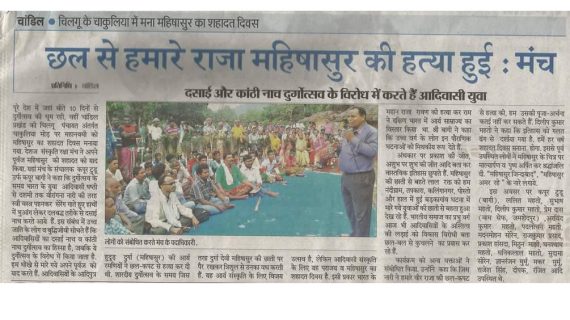 Mahisha-Durga controversy: As it appeared in the media