The obituary of caste as a (if not the) deciding factor in Indian politics has recently been written repeatedly. Following the 2009 Lok Sabha election, political pundits pronounced the death of caste and the birth of aspiration – that cut across caste and other identities. However, in our very first Cover Story titled “Victory of Aspiration” I had written, “The message in the ballot is clear: Ideology and/or identity politics plus nothing else will no longer work. It has to be Ideology+Performance and/or Identity+Performance.” Election after election, both state and national, has confirmed this new formulation: caste is still a necessary but no longer a sufficient condition to assure electoral victory. 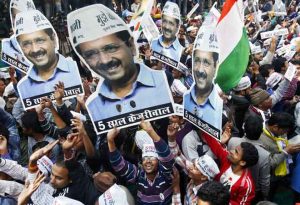 Hence the victory of the young AAP David versus the formidable BJP Goliath has not surprised FP, just the scale of the rout of the BJP. If he were not so humble, CSDS Director Sanjay Kumar could well be saying “I told you so”. His book analyzing the demographics and trends in the first three Delhi assembly elections was published well before the 2013 year-end assembly elections in which the freshly minted AAP opened its account and surprised many. If the 2013 AAP success was based on its attraction for Delhi’s mostly Bahujan urban poor, the clean sweep of the 2015 elections has consolidated that class as its vote base and built upon it to eat into the middle-class and even upper-caste preserves of the BJP and Congress. The Cover Story has Sanjay Kumar’s exclusive analysis of this trend from caste to class.

Even while Delhi was going to the polls, Patna was the stage of Nitish Kumar’s self-inflicted tragicomedy where Caste was predictably in the lead role. As I have reflected on this drama – of the tantrums of his protégé Manjhi’s assertion of Mahadalit asmita and apmaan – I cannot help thinking of Frankenstein and the “monster” he created and how it consumed the rest of his life. We do not wish such a fate on even our worst enemy, not on Nitish Kumar and certainly not on the good people of Bihar. Therefore, we hope he and the people of Bihar will read the frank open letter from his former colleague and ideologue, Prem Kumar Mani, and heed its advice. His is one of the few voices that can speak truth to power.

Many of the worst atrocities against Dalits have been perpetrated in Bihar. In this issue we welcome the eminent jurist Arvind Kumar Jain who has contributed his indictment of the casteist judiciary for their “string of shameful judgments”. These are, he diagnoses, a predictable result of the conspiracy to block Dalits from the higher judiciary. A veteran Bihar journalist, under the pen name Atul Kumar, digs through the changing sociological terrain to give us the true reasons behind the repeated acquittals of upper-caste perpetrators of Dalit massacres. He shows how an unspoken truce has been arrived at without the cause of social or any justice being served.

At the intersection of caste and class, one of the most fertile minds was that of the late Prof Tulsi Ram. An academic and a literary author, best known for his two-volume Hindi autobiography, the lifelong passion of this Dalit intellectual was to bring together the three ideological streams of Buddha, Marx and Ambedkar. Perhaps, he thought, in that fusion lay the key to defusing caste, which he considered much more destructive than nuclear bombs.