In the recent war of words over Jawaharlal Nehru University one crucial aspect of Indian mythology and its present interpretation came to the fore. HRD minister Smriti Irani, while defending the actions of her government, said that JNU is the den of anti-national activities. Seeking to substantiate her argument she cited the celebration of Mahishasur Martyrdom Day on the campus and a pamphlet with derogatory references to the goddess Durga. Durga is worshipped by many as the slayer of Mahishasur.

The issue of interpreting the slaying of Mahishasur, who has been projected as a demon in the popular narratives, has been in the air for quite sometime. Before this, another controversy about the goddess had broken out a few years ago. It was over a reference in a IGNOU textbook to the goddess drinking alcohol. Pranab Mukherjee, who was a union minister at the time, had responded by quoting shlokas from the scripture Chandi Path, which describes the goddess drinking once, and then again and again, in the middle of a battle, her eyes bloodshot – as red as the rays of the rising sun. 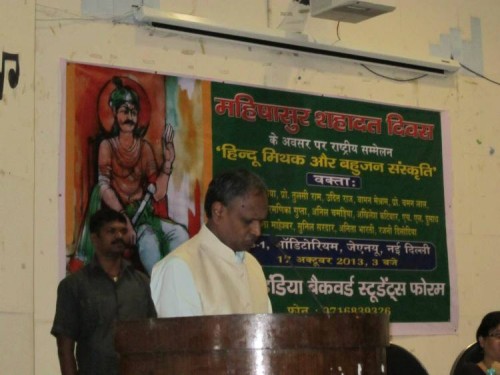 In October 2014, copies of a special issue of the Forward Press magazine that delved into the Bahujan understanding of Mahishasur and Durga were seized by the police on the complaint by members of the ABVP that that they would precipitate hatred between Brahmans and OBCs. This matter is still in the court. Durga Puja in its present form began not very long ago. It is only 260 years old. After the defeat of the Nawab of Bengal in the 1757 Battle of Plassey, Raja Nabakrishnadev of Calcutta organized the first Durga Puja to honour Lord Clive. This festival is thus not only a relatively new tradition, it is also anti-Muslim and pro-imperialism by implication.

While there had been communities celebrating Mahishasur’s life, the observance of Mahishasur Martyrdom Day came to light just a few years ago. Starting in 2011, a group of students have been organizing the celebrations in JNU. Udit Raj, who has now joined the BJP, was a speaker in one of these programmes. Today, this day has found a place in the calendar of Adivasis communities in various places, especially in West Bengal. Last year, the day was observed in over 300 places. Many Bahujan scholars, including those writing in the Forward Press magazine, have been arguing that the celebration of the slaying of Mahishasur is not in good taste on two counts. One, it celebrates death and two, it is based on a brahmanical interpretation of the incident, with Mahishasur, the tribal king, projected as a demon.

The interpretation of the myth is mired in problems. The myth obviously concerns the pre-historical period and the usual, rigorous tools of history cannot be applied easily. As such the dominant narrative is that goddess killed the demon and so this day is celebrated as a victory of good over evil. According to this version, Brahma, Vishnu and Mahesh together created Durga and endowed her with supreme powers, because the demon could not be easily defeated. This narrative also presents the demon king as half-man, half-buffalo.

According to the leaflet that Minister Irani read out in the Parliament, Durga was a sex worker who was commissioned to kill Mahishasur. She honeymooned with him for nine nights and then killed him in his sleep. It may be recalled here that the city of Mysore was named after him. A friend brought to my notice a Tyeb Mehta painting from the Kali series, showing the goddess in deep embrace with Mahishasur. It sold for an astronomical price.

As such, the first mention of Durga is found in the Markandey Purana, written between 250 and 500 AD. While the popular celebrations and perceptions are in agreement with what Irani asserted, these are the brahmanical or dominant versions. That many communities remember the same “event” as Mahishasur day is not so well known. This has come to light in the so-called mainstream only very recently, especially with these celebrations in JNU and the discussions in the Forward Press magazine. I may add here that the dominant discourse is always of the dominant castes/classes.

The interpretation of this good versus evil, Gods versus Asuras is what is prevalent, and this hails the coming of Aryans here. The other interpretation was presented by Jotirao Phule who stands the brahamanical interpretation on its head and points out that Aryabhatt Brahmans invaded this land and defeated the native Tribals by force and deceit. This interpretation also brings up the social change that resulted from the struggle of the downtrodden against caste slavery. Extending this further, the Ram-Ravana duality has also been reinterpreted. It may come as a surprise to many but it is true that many communities celebrate the life of Ravana. They remember him as one who was a great soul, full of wisdom.

While Hindutva politics has constructed its campaign around Ram, he comes under heavy criticism from both Ambedkar and Periyar. Ambedkar takes him on for killing the popular king Bali by shooting an arrow on his back, terming it unethical. Bali was a popular king, who is celebrated even today and his rule is remembered as a period of happiness for non-Brahmans. The killing of Shambuk by Ram because he was doing penance, which was forbidden to the Shudras, is again a Brahmanical ploy to retain social hegemony. There can be no justification for Ram banishing his pregnant wife Sita. So, interpreting the Ram-Ravana story has added caste/race and, of course, gender dimensions to it.

One must clarify that the theory of race and of the arrival of Aryans and the invasion of the natives has been superseded by the theory of communities intermixing over a period of time. One major dimension to myth about Durga is gender. Mrinal Pandey, in her essay on Scroll.in, presents the issue as one of assertion of women against the might of patriarchy. So, there is race, there is caste and there is gender! It is natural for a diverse society to have these multiple narratives and it is wrong to crush or supress any of them.

Irani, the BJP and the RSS are opposed to the emergence of subaltern narratives as they are a threat to their hegemonic project to establish the upper-caste/upper-class dominion over society. They cannot tolerate pluralism, hence the supercharged attack by HRD minister in the Parliament, terming the alternative version of the Durga-Mahishasur myth as undesirable and anti-national.