Rhetoric, reservations and beef were the three buzzwords of the year 2015. The BJP, which won a majority in the 2014 general elections, was in for major shocks. It had to bite the dust in Delhi and Bihar. In both the elections, the debate over a possible beef ban, the talk of a review of the reservation policy and the BJP’s failure to keep its promise of transferring Rs 15 lakh into the bank account of every citizen cost it dear. On the other hand, lakhs of politically and socially influential Patels rallied behind Hardik Patel in the prime minister’s home state of Gujarat, demanding reservations for their community. Given the general perception that the Patels are the most prosperous community of Gujarat, their agitation evoked surprise. The common refrain was that there was a time when the Patels had bitterly opposed reservations and now they are ready to brand themselves as backwards! Are the Patels losing their hold over the society and economy of Gujarat? Are the Dalit and OBCs challenging the domination of the Savarnas in the government and the administration? Has the much-touted Gujarat model of development proved a damp squib? Is there a conflict of interest between Dwij Savarnas (Brahmin, Thakur, Bania) and non-Dwij Savarnas (Marathas, Jats, Patels, etc)? All these issues need to be probed and analyzed.

The Patels or Patidars of Gujarat believe that they are the descendants of Shri Ram. They are mainly concentrated in eastern Gujarat and Saurashtra and number around 1.5 crore in the state. The biggest icon of the Patel community is Sardar Vallabhbhai Patel. As Sardar Patel hailed from a Gurjar family, now Gurjars also consider themselves Patels. The Patidars are divided into Leuwa Patels and Kadwa Patels. They claim they are descendants of Lav and Kush. Some say that the Leuwa Patels are the equivalent of the Kurmis of north India and Kadwas are the equivalent of Koeris. The Kurmis and Kushwahas of north India also claim lineage from Lav and Kush. It was Prem Kumar Mani, the veteran commentator and author from Bihar, who mooted a joint front of Lav and Kush, that is, of Kurmis and Koeris. The state Chief Minister Nitish Kumar forged the joint front and that benefited his party in the recent elections. 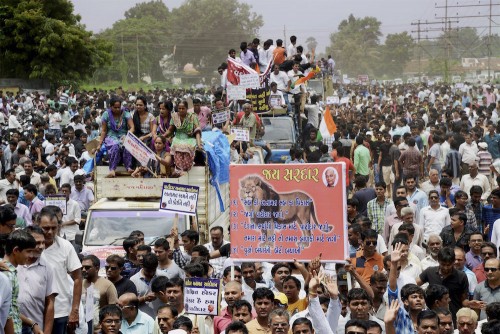 The Patel community was actively involved in the Indian freedom struggle. They lent their full support to the Sardar Patel-led freedom movement in Gujarat. Post-Independence, the Patels emerged as a force to reckon with in the social, political and economic sectors in Gujarat. They were mainly Congress supporters. After former chief minister Madhav Singh Solanki sidelined them by building the KHAM (Kshatriya, Harijan, Adivasi, Musalmaan) coalition, the Patels started looking towards the BJP and helped the party strike roots in Gujarat. According to Professor Sebastian Morris of IIM Ahmedabad, Patels were considered Shudras (the backward castes of today) and their place in the social hierarchy was below that of Brahmins, Kshatriyas and Banias. Thanks to the British ryotwari system, Patels became owners of huge tracts of fertile land. In 1860, railways arrived in the Baroda State, enabling the Patels to fetch good prices for cotton, tobacco and oilseeds grown by them. They prospered and their social status grew. Some of them shifted base to cities and towns and tried their hand at business and industries, achieving great success. A sizeable number of them moved to foreign shores. But basically, they are an agriculturalist Shudra community.

The economic liberalization and privatization that began in 1991 helped add to the wealth of the rich capitalists while adversely impacting small and medium industries and farming. In Gujarat, Patels were the most severely hit. Well-known journalist and analyst Aakar Patel writes: “India’s share of services is 59 per cent of gross domestic product (GDP). In Gujarat, services is only 46 per cent of GDP, 13 per cent less than the national average. The share of industry is higher in Gujarat (41 per cent, compared to just under 30 per cent nationally) but this has always been the case … That was never wanting. What was missing from Gujarat was the new economy money, billions of dollars the rest of urban India is taking from the West.”

During Narendra Modi’s stewardship, Gujarat’s growth story was more hype and less reality. According to renowned sociologist Ghanshyam Shah, “The Patel community could not keep pace with urbanization and changing times. Globalization spelt ruin for the small industrial units owned by them. And that is why they are now demanding government jobs. The industrial growth rate of Gujarat has declined considerably and that has come as a major setback for the Patels. Those who have migrated to cities from the villages are unwilling to go back. Patels are the worst victims of the Gujarat Model.”

According to Prof Sebastian Morris, “The growth rate of Gujarat declined considerably from 2002-03 onwards. While the national growth rate was 4.5-5.0 per cent, it was 3 per cent in Gujarat. From 2012, the state has been witnessing a negative growth rate, though it has never been acknowledged officially. As part of its anti-inflationary measures, the Reserve Bank of India has constricted liquidity. This has hit small industrial units. According to RBI, in 2014, the number of sick industrial units in Gujarat was 48,000, of which most were owned by Patels.” According to Prof Y.J. Alagh, former vice-chancellor of JNU, “Patels have enough fertile land but owing to the negative agricultural growth rate over the last five years, the Patel farmers have got disillusioned with farming. The younger generation of peasant families is migrating to cities. But here too, disappointment is in store for it. The Gujarat Model has failed to generate avenues of employment.” This is one reason why the youth of the Patel community have taken to the streets, demanding reservations in jobs in proportion to their population.

The reservation agitation began in Gujarat’s Mehsana, the district with the biggest Patel population. Initially, they wanted the community to be brought under the OBC umbrella so that it would become eligible for reservations in educational institutions and government jobs. However, as the support for the agitation grew, its leaders started demanding more and more. Hardik , the convener of Patidar Anamat Andolan Samiti, and Laljibhai Patel, the convener of Sardar Patel Group, were the key leaders of the movement. After the 25 August 2014 rally, Hardik emerged as its supreme, unquestioned leader. Hardik made every possible effort to give a national character to the movement. He claimed that the total Patel population of the country was 27 crore. He said Gurjars, Kurmis, Marathas, Reddys, Kappus, Kudmis and Khandayats were also Patels, and referred to Bihar Chief Minister Nitish Kumar and Andhra Pradesh Chief Minister Chandrababu Naidu as members of the Patel community.

In the 25 August Kranti rally, Hardik Patel declared, “We will get reservation. Neither the BJP nor the Congress will give it. We have faith in the Supreme Court … one has to cough up Rs 10-12 lakh to get the job of a clerk or a peon. If the son of an SC, ST or OBC gets a job, we have no problem. But if a farmer’s son does not get a job despite securing 90 per cent marks, we will not tolerate it, no matter whose government it is. We had uprooted the hand. 2017 is round the corner. If the BJP does not give us reservation, the lotus won’t bloom.”

Initially, the leaders of the Patel movement had declared that either the Patels should get reservation or no one should. The RSS had backed them on this issue. The Sangh had said that reservations should be given on an economic basis. The Savarna-dominated media gave extensive coverage to the movement and tried to drum up support for the demand that income, and not social or educational backwardness, should form the basis of reservations. However, subsequently, perhaps taking their cue from the reservations for the backward classes in north India, they declared that they wanted reservations on the basis of caste and not income. The Sangh immediately withdrew its support for the movement. On 2 October, Hardik Patel said in Delhi that the Sangh wanted to hijack the movement. Now, the entire Patidar community has turned against the BJP.

For the last decade or so, the non-Dwij castes have been demanding reservations. They want to carve out a niche for themselves in the socioeconomic, political and cultural fields. They no longer want to remain tied to the apron strings of the Dwij Savarnas. The unsuccessful attempts by the Marathas (in Maharashtra) and Jats (in Haryana and at an all-India level) to secure reservations should be seen in this context. Even today, the Dwijs dominate the administration and the policymaking institutions. The non-Dwij Savarnas and Dalits, OBCs and Tribals have a negligible presence there. It is high time the “Jiskee jitnee sankhya bharee, uskee utnee bhageedari” (Higher the number, bigger the representation) slogan of Kanshi Ram, the late standard-bearer of Bahujan politics in the country, is implemented. All castes should be given representation in proportion to their population. Inclusive development with social justice should be the development model. That is the only way to achieve “sabka saath, sabka vikas”.