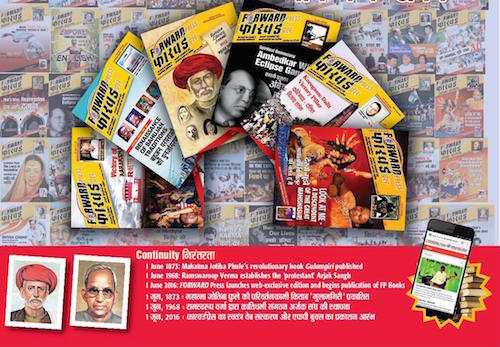 Several times in the course of the FORWARD Press magazine’s short but eventful life over the last eight years it has seemed that it would die for one or another reason – finances or my health, among others – but each time we have surprised ourselves, our many well-wishers and even our few enemies. Particularly, in 2013, when my health was shattered, I had premonitions of both my own and the magazine’s mortality. I used to choke up at the very thought of putting FP “to bed” (journalese for putting the magazine to press) for the last time, of delivering a funeral oration at FP’s sixth anniversary “celebration”. Strangely, when we should have been celebrating FP’s seventh anniversary, we are indeed putting it to bed for the last time but not to sleep (a euphemism for euthanasia!). Even before the spirit of FP leaves its print body it has transmigrated to the World Wide Web. From 1 June, when the final print edition hits the newsstands, FP as a magazine will exist only on the web.

When that moment has finally come, I am experiencing a strange serenity. Quite different from the railing against death we read in Dylan Thomas’ famous poem to his dying father, Do not go gentle into that good night. / Rage, rage against the dying of the light. No, faithful reader, FP is not going gently into neither the night of tamed thoughts nor into the land of silence where the brahmanical overlords would want it permanently exiled. Instead, what has been sought to be killed by chopping off the head will sprout myriad heads (like Hydra in Greek mythology) and the battle will continue.

However, as I read through the various memoirs of and tributes to FP, there were times I choked with emotion. But that emotion was one of being overwhelmed by stories of FP’s impact on individuals, groups, whole Bahujan communities. The emotion was one of gratitude to our many well-wishers, only some of whose pieces you will read in this issue. On the web we can continue to publish such memoirs and tributes.

Pramod Ranjan, my wife Dr Silvia Fernandes Kostka and I have each contributed a memoir. Each one could only mention some names. However, of all the names, I would single out that of Prof Rajendra Prasad Singh from Sasaram (Bihar), who seems to be grieving the most. Once he joined the Forward Family, he has displayed fierce loyalty. Besides contributing several pieces mainly on Bahujan literature and linguistics, he pioneered the Forward Readers’ Club in Sasaram, instituted and funded an annual award for the best piece written by an OBC in FP. We cannot thank someone like him enough; any award FP can confer on him would be mainly a token.

I want to say to Prof Singh and other readers/writers like him who are mourning the passing of FP in its monthly print avatar: you are mourning for a medium, not the message – the body and not the soul of FP. Can we clap with one hand, fly with one wing? FP has now gone from print only to digital and print. Moreover, digital mediums are more democratic than print though, no doubt, print was the precursor of modern democracies. Digital will deepen the democratic access and exchange, it will speed it up and widen it. Dimensions that print has not permitted Bahujans to plumb will now be open to us.

If you too are filled with mixed emotions, I can empathize with you. However, as an American humorist and novelist told a journalist sent to investigate whether he was, as rumoured, on his deathbed, “The report of my death was an exaggeration.” Long live FORWARD Press!

Published in the June 2016 issue of the Forward Press magazine