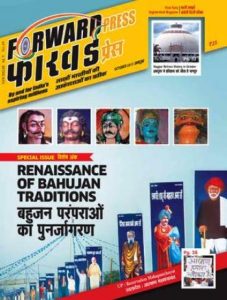 The decision to close the print edition of FORWARD Press magazine must have been taken due to economic compulsions. We recently witnessed the shutting down of another journalistically committed and highly relevant publication Combat Communalism. The editors duo tried to keep it afloat but ultimately the market realities took over. Combat discontinued its print edition and resurfaced as a portal, Sabrangindia.in While it is a difficult time for Dalitbahujan movements, one bright spot is the ever-widening reach of social media, portals and websites that can be multilingual as well.

FORWARD Press magazine gave impetus to the voice of the oppressed in two unique ways. One was to raise issues related to the dominating influence of brahmanical culture and to confront it boldly and in a principled manner. It took up causes that are now laying the foundation of a culture of resistance ­– the culture which provides the base for political confrontation. It went beyond the obvious to where the dominant culture of the elite had pushed the concerns of underprivileged and brought into focus the world of Dalitbahujans, their history, their concerns and the challenges they face. This is a historic contribution in the ongoing struggle against the hegemonic power of the brahmanical ideology.

Most of the issues that became lead stories in the magazine are crucial in building a wider unity in the struggles of the downtrodden. These stories will act as a beacon for building a movement for securing dignity and rights of the Bahujans. Following in the footsteps of Phule, Ambedkar and Periyar, the magazine sparked debates on mythological interpretations and other issues, and built a broad platform of Bahujan unity, which will be key to ensuring a life of dignity for everyone.

Today, brahmanical politics is wearing the garb of Hindutva and allying with global hegemonic powers that are suppressing human rights in large parts of the globe. Time and again, a brahmanical mythology is being pushed forward in different guises to undermine the rights of the oppressed sections of society. What is needed is that the foundational work of this magazine should be broadened by appropriate use of web portals, Facebook and other platforms to ensure that the informal association of its readers and writers is taken forward for social interventions. All those who have been part of Forward family have to stick together and ensure that this goal is reached.

FORWARD Press’ print edition has been unique in another way too. The bilingual format was very effective in communicating with a diverse society. Our hope is that its web avatar will appear in many more regional languages. This farewell issue should be considered an appeal for more people to join the effort, to make it a linguistically more diverse platform. I will surely miss the print edition but do look forward to continuing engagement with the web edition.