Mysore University’s Dalit professor B.P. Mahesh Chandra Guru was granted bail on 24 June 2016 and was released from the prison late in the evening the same day. Talking to FORWARD Press after his release, he said that he was proud of his ideological commitments, adding he would prefer “Bhim Raj” to Ram Raj in the country (read Who is pro-Mahishasur, ‘anti-Ram’ Professor Mahesh Chandra Guru?).

On 17 June, a Mysore court had remanded Prof Guru in judicial custody in a one-and-a-half-year-old case. A Hindutva organization had lodged a complaint against Professor Guru on 3 January 2015 saying that he had “insulted Lord Ram”. Taking note of another old case, the court had turned down his bail application on 20 June. That brought into limelight the earlier complaint against him by C.H. Ramu, vice-president of the SC Morcha of Karnataka BJP. He was accused of abusing Prime Minister Narendra Modi and the Union Human Resources Development Minister Smriti Irani. FORWARD Press has looked into why and how these cases were filed:

What are the cases?

The country’s first Dalit-Buddhist professor of media studies, Prof Guru has been part of many academic institutions and commissions in Karnataka and is a well-known rationalist and social activist. He is active on many fronts against religious hypocrisy and brahmanical mythology. It was this activism that put him at loggerheads with Hindutva organizations and led to the registration of the three cases against him.

Prof Guru, who describes himself as a protagonist of Bhim Raj, had criticized Ram (Indian mythological character) while speaking on “Media and Human Rights” at a UGC-sponsored workshop for teachers in Mysore University on 3 January 2015. He had said, “The Ram of Ramayana had violated human rights. He suspected the fidelity of Sita, who was pregnant, and harassed her. I consider this a violation of human rights.” He had added, “The media was presenting Ram as an ideal character, which was not right for the people.” It was after this speech that Karnadu Sarvodaya Sena lodged an FIR against Prof Guru.

In February 2015, Professor Guru had participated in a programme organized by some social activists in which the Bhagwad Gita was to be burnt. On this occasion, he had said that the Gita sanctified the varna system and was a “treatise of exploitation”. Although he said that simply ignoring the scripture and not attaching any importance to it would be better than burning it, the VHP had a case of “hurting religious sentiments” registered against him and three other professors. The Bharatiya Janata Yuva Morcha (BJYM) also held a protest demonstration against Prof Guru, Prof Bhagwan, Prof Arvindamgatti and Prof Bangere Mahesh. It was when this case was brought to the court’s notice that it had refused bail to Prof Guru on July 20 (read More trouble for ‘anti-Ram’ Guru).

In January 2016, at a meeting organized to protest against those responsible for the suicide of Dalit student Rohit Vemula, Prof Guru described Narendra Modi and Smriti Irani as anti-Dalit and called upon the Dalit students to struggle for justice. He also criticized India’s first prime minister, Jawaharlal Nehru. This led to C.N. Ramu, a Dalit BJP leader, then general secretary and the present vice-president of the BJP State SC Morcha, lodging a complaint against him with Benguluru Police. Ramu told FP that he had only sent a written complaint against Prof Guru to the police commissioner of Bengaluru and governor of the state and that he didn’t have a case filed against him. When asked why, despite being a Dalit, he was opposing the anti-Brahmanism campaigns of Guru and the professor’s efforts to secure justice for Dalit students, Ramu said, “Dalit intellectuals should not issue statements which spread animosity in society.” 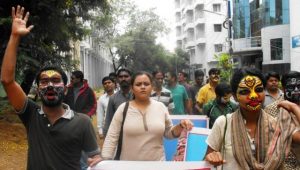 In 2015, Professor Guru organized the celebration of Mahishasur Martyrdom Day in Mysore. Describing Mahishasur as Buddhist ruler, Guru told the gathering that Mysore was called Mahisha Mandala in the past and that he considered Mahishasur his ancestor (read Prof Guru’s article on this subject). This had also antagonized the Hindutva organizations. According to Prof Guru, “Mysore has also been referred to as Mahisha Mandala, Mahishuranadu, Mahishanadu and Mahishapura. A predominantly agrarian state, Mahisha Mandala had a large number of buffalos that were used for cultivation, dairy and other purposes. Hence, Mysore was also called Erumaiyuran, which means a land of buffalos. The Buddhist and Hoysala literatures contain a lot of information about Mahisha Mandala.”

It was Prof Guru’s advocacy of Dalitbahujan traditions that turned Hindutva organizations against him. After his release from jail, Dalitbahujan thinkers of Mysore held a big reception for him. It is understood that the Mysore University is considering revocation of his suspension. The University also did not show any undue haste in issuing his suspension orders even after the decision of the syndicate.