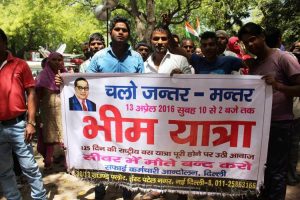 As the world readied for the gala celebration of the 125th birth anniversary of Babasaheb Ambedkar, a section of Dalits known to the rest of Indian society as manual scavengers gathered in the capital to drive home their agonizing reality nearly seven decades after independence and six decades after Ambedkar passed away. They had travelled 35,000km over 125 days, starting in Dibrugarh in Assam and traversing around 500 districts and 30 states, before culminating at Jantar Mantar, in New Delhi, on 13 April 2016. Under the banner of Safai Karmachari Andolan (SKA), which has been spearheading their struggle for liberation from this dehumanizing work, they agonizingly cried out “Do not kill us”. It referred to more than 22,000 unsung deaths of sanitation workers every year (incidentally acknowledged by the BJP MP Tarun Vijay in Rajya Sabha just the previous month), more than 4.5 times the deaths of all army, police and paramilitary personnel while combating militancy in Jammu and Kashmir over 17 years from 1990! With tears flowing down their cheeks, several children narrated horrific tales of how their kith and kin fell victim to this hazardous work.

Here was yet another paradox in a land of paradoxes. While Ambedkar was elevated to the status of a super icon, the people he lived and fought for were begging for their basic existence!

The Constitution of India abolished untouchability but did nothing to do away with the conditions that reproduced it. Here was a people who epitomized untouchability at its cruellest – they were untouchables not only to the caste Hindus but even to the other Dalit castes. Gandhi, notwithstanding his regressive views on the matter, had rightly identified Bhangis (the caste identified with manual scavenging) as representative of Dalits and presented himself as a Bhangi to make his point. He lived in a Bhangi colony to exhibit his love for them. It was imperative for the state swearing by Gandhi to have outlawed this dehumanizing work and accorded highest priority to the rehabilitation of the people engaged in it. But instead, it chose to dodge the issue by setting up committees and commissions that appeared to be concerned but did do anything about it for a full 46 years.

This game had begun as early as 1949 and continues even today. The Government of Bombay appointed a committee known as the Scavengers’ Living Conditions Enquiry Committee in 1949 with V.N. Barve as chairman. The committee submitted its report in 1952. In 1955, the Ministry of Home Affairs (MHA) circulated the major recommendations of this committee among all the state governments requesting them to adopt those recommendations. However, nothing happened. In 1957, the MHA itself set up a committee headed by N. R. Malkani to prepare a plan to put an end to the practice of scavenging. The committee submitted its report in 1960. One of its recommendations suggested that the state and the central government jointly draw up a phased programme for implementing the various recommendations so as to end the practice within the Third Five-Year Plan. This came to nothing and in 1965, the government appointed another committee to consider abolishing customary rights of the scavengers. In its report, the committee recommended the dismantling of the customary rights structure under which non-municipalized cleaning of private latrines was passed on from one generation of manual scavengers to another. This also went into cold storage. In 1968-69, the National Commission on Labour recommended a comprehensive legislation for regulating the working and living conditions of scavengers. During the Gandhi Centenary Year (1969), a special programme for converting dry latrines to water-flushed latrines was undertaken but it failed at the pilot stage itself during the Fifth Five-Year Plan and hence was discarded in the Sixth. In 1980, the MHA introduced a programme for conversion of dry latrines into sanitary latrines and rehabilitation of liberated scavengers and their dependents in dignified occupations in selected towns. In 1985, the programme was transferred from MHA to the Ministry of Welfare. In 1991, the Planning Commission bifurcated the programme, with the conversion of dry latrines assigned to the ministries of urban development and rural development and the rehabilitation of scavengers assigned to the Ministry of Welfare (renamed Ministry of Social Justice and Empowerment in May 1999). In 1992, the Ministry of Welfare introduced the National Scheme for Liberation and Rehabilitation of Scavengers and their Dependents (NSLRS) but with nothing came of it. This brief survey is enough to expose the hypocrisy of the state towards abolishing manual scavenging. 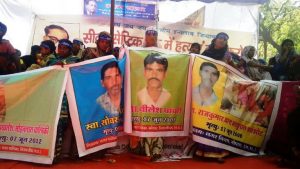 Evidently, the Articles 14, 17, 21 and 23 of the Constitution of India could be counted upon to stop the practice of manual scavenging. For instance, Section 7A and 15A of the Protection of Civil Rights Act, 1955 (formerly known as the Untouchability (Offences) Act, 1955), enacted to implement Article 17, provided for the liberation of scavengers as well as punishment for those continuing with the practice of scavenging. As such, one could argue that there was no need for the Employment of Manual Scavengers and Construction of Dry Latrines (Prohibition) Act, 1993. This Act received the presidential assent on 5 June 1993, but remained even unpublished in the Gazette of India until 1997, and no state promulgated it until 2000. Irked by the persistent inaction by the government, the SKA, which was started by the children of the manual scavengers in 1994, along with six other civil-society organizations and seven other individuals belonging to the community of manual scavengers, had to file a Public Interest Litigation in the Supreme Court in December 2003 demanding directions and contempt proceeding against the government. The SKA countered the denial by various state governments with voluminous data over a period of 12 years before finally getting a sympathetic judgment of the Supreme Court on 27 March 2014.

The court directed the government to pay Rs1 million for each death that has occurred during manual scavenging (including while cleaning sewers) since 1993. During the Bhim Yatra, 1268 such deaths were documented and it was found that compensation was paid for only 18. Recently, the parliament added another law – the Prohibition of Employment as Manual Scavengers and their Rehabilitation Act, 2013. But nothing moved on the ground. While the state governments had remained in denial since promulgation of the 1993 Act, the 2011 Census of India found 794,000 cases of manual scavenging across India. The biggest violator of this law continues to be the government’s own departments. Indian Railways, for instance, has train carriages with toilets that drop excreta on the tracks, which are then manually cleaned by scores of scavengers. The prime minister, who pompously declared that India would be scavenger-free by 2019 as part of his Swachh Bharat Abhiyan and spoke of building a bullet train network, could not even give a timeframe for the railways to replace all current toilets with bio-toilets.

The lack of political will is evident in the statement of the central government on 19 April, apparently in response to the SKA’s Bhim Yatra, that since it could not receive data from the states, it would directly survey the incidence of manual scavenging in the country with the help of an agency. There is no intelligence required to guess that this survey will buy the government another decade to wear out the 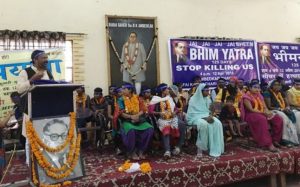 fighting Safai Karmacharis. But why should the government that dreams of a leading role in the world choose to live with this abiding shame? The answer is not very difficult. The political will in India, at its root, is informed by electoral logic. The miniscule community of the scavengers is hopelessly fragmented, ghettoized at every locale, detached from not only the larger society but even the Dalit community. In terms of votes, its contribution is insignificant for any political party. The only deterrence for the ruling classes is that the persistence of manual scavenging is a cause for national embarrassment as was untouchability to the early reformers. Like untouchability, the custom of manual scavenging is tied to the feudal culture and its erosion means incurring displeasure of the majority community. As it was with the abolition of untouchability, so it could be with the abolition of manual scavenging, which in fact is the gravest expression of the former – while time wears out those fighting for it, the issue is turned into an electoral toy to play with.

While the attitude of the ruling class to the problem can be explained easily, more intriguing is the apathy of the Dalit movement towards the manual scavengers. The mainstream Dalit movement never really took up the issue of manual scavenging with the seriousness that it deserved. The pivotal strategy of the Dalit movement has been to press for representation. Hence, Babasaheb Ambedkar led the struggle to get reservation in politics, followed by reservation in government jobs (education being the prerequisite for employment). He had hoped that the Dalit politicians would protect political interests of the Dalit masses and the more educated Dalits entering bureaucracy would provide a protective cover for them. Thus, there was no direct engagement with the material problems of the Dalit masses. Reservations became the sole concern of the Dalit movement, which then distanced itself from the issues relating to the labouring Dalits. The thin layer of middle class that emerged among Dalits over the last seven decades, virtually detached from the Dalit masses, made reservations its obsession.

It is revealing that despite not a single “Ambedkarite” to be seen, the Bhim Yatra made Ambedkar’s inspiring presence felt. All notable progressive individuals were present in solidarity with the struggle of the poor scavengers but the self-proclaimed Ambedkarites were conspicuous by their absence. 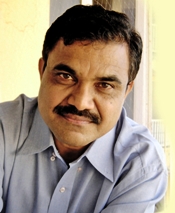 Anand Teltumbde is a management professional, writer, civil rights activist and political analyst. He has authored many books (translated widely into most Indian languages) on various issues relating to peoples' movements, with a particular emphasis on the Left and Dalits, and is a noted scholar on the subject.