A tireless crusader for the cause of Indian farmers and Tribals, a guiding light for social activists and a celebrated writer is no more. Mahasweta Devi breathed her last at around 3pm on 28 July in Kolkata’s Belle Vue Nursing Home. Born in Dacca in undivided India on 14 January 1926, Mahasweta Devi was the daughter of famous litterateur Manish Ghatak and novelist Dharitri Devi, and the niece of renowned filmmaker Ritwik Ghatak and Sachin Chaudhari, the founder of Economic and Political Weekly. (Ritwik Ghatak is widely remembered as a filmmaker who was as accomplished as the all-time great Satyajit Ray.) She changed her surname to Bhattacharya after her marriage to well-known theatre personality Bijon Bhattacharya. Famous writer-activist Nabarun Bhattacharya was the only child of the couple.

Born into a family of accomplished artistes and writers, Mahasweta Ghatak was exposed to the writings of Rabindranath Tagore while she was still a student. She was destined to become a writer-activist and she did. Among others, Padmabhushan, Jnanpith and Magsaysay awards were conferred on her. Though she has departed from the mortal world, she will remain in our hearts as the mother of Mahaaranya, people’s movements and Hazaar Chaurasi.

When I saw Mahasweta Devi for the first time in 1993, I was not even remotely connected with the world of literature and neither could I foresee that I would become a writer in the future. Just as they did to Rohit Vemula, Manuwadis had forced Chunni Kotal, the first graduate from the Shabar community of Bengal, to commit suicide. I was astonished and mesmerized by the articulation of Mahasweta Devi, as she spoke with great passion at a condolence meeting organized at Esplanade, Kolkata for Kotal. In the year 2000, in reply to a six-page letter of my friend Gosaiji expressing his keenness to attain Moksha, I wrote a 674-page book Aadi Bharat Mukti: Bahujan Samaj (The tale of the struggle of indigenous inhabitants against the Hindu imperialists). In the 12th chapter of the book titled “Prachartantra Aur Bahujan Samaj”, I wrote: “Following in the footsteps of Premchand and Sarat Chatterjee, Mahasweta Devi had made bringing the problems of the Tribal community – which had withdrawn into the forests and caves to protect the ancient Indian civilization and culture from the alien, invader Aryans – before the world her mission. Even at an advanced age, she is at the forefront of the movement against the violation of forest rights and the persecution of the forest dwellers [page 441].”

By keeping Tribals centre stage in her literary works, she carved out a unique place for herself among the litterateurs of the mainstream. While pitying the status quoist mindset of the mainstream Hindu writers, I was always saddened by the fact that no writer in our country could don the mantle of American writer Harriet Beecher Stowe. What shocks me is that elite Indian writers, while swearing by Tolstoy and Gorky, never even uttered the name of Stowe – this when her Uncle Tom’s Cabin had a much wider and lasting impact on the human race than other classic works, including Mother and War and Peace.

Uncle Tom’s Cabin, published in 1852, inspired the American Civil War, the greatest war in the history of humanity. It saw the whites pick up the gun against their own brethren who had shamed humanity by treating the blacks like animals. This war led to the demise of the slavery system in 1865 via the 13th Amendment to the American Constitution. Stowe’s book not only forced the American elite class to recant but also triggered a race among the European feudal lords to free the serfs.

The daughter of a white American priest and a housewife mother, Stowe was not a born writer. She picked up the pen when she saw the horrific condition of the Negro slaves. Since she had taken to writing only to free the blacks from slavery, she kept her works focused only on their wretched existence. Dred: A Tale of the Great Dismal Swamp, The Pearl of Orr’s Island and Oldtown Folks were all anti-slavery but none could create as much impact as Uncle Tom’s Cabin did. Stowe herself was so overwhelmed by the work that she remarked that Uncle Tom’s Cabin was written not by her but by god.

Her book filled the stony hearts of the whites with compassion. Stowe was not a literary genius but she was large-hearted and was blessed with humanitarian sensitivity. There is not even an iota of such sensitivity in Hindu writers. Dr Ambedkar had proved that untouchability was worse than slavery but it could not stir the conscience of the elite Indian litterateurs. If they had even a bit of the sensitivity of Stowe, the sight of sub-humans moving around with a spittoon hanging from their necks and a broom tied to their waists would have moved them, and at least one of them would have emerged as India’s Harriet Stowe. But not a single litterateur of the elite class focused on the emancipation of Dalits. The Dalit characters were only used to add variety and colour to their works. In this respect, Mahasweta Devi was an exception. Though she ignored the Untouchables, by focusing on the Tribals – who are as mistreated and exploited as the Dalits – she became India’s Harriet Stowe. Stowe associated herself in body and soul with the blacks. Mahasweta Devi did so with the Tribals. 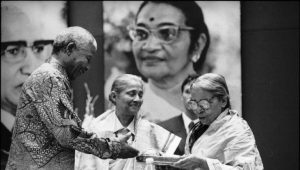 Mahasweta Devi not only espoused the cause of the Tribals through her writings but also became involved with them at a personal level – so much so that despite being born in a renowned and well-known family, she consumed khaini (tobacco mixed with lime) and smoked bidis unhesitatingly in the company of Tribals. She linked up with many eminent and not-so-eminent cultural and social activists working for the welfare of the Tribals. But while Mahasweta Devi incessantly fought against feudalism and imperialism and for securing the rights of the Tribals and the farmers, like Bankim Chatterjee, Sarat Chatterjee, Tarashankar Bandopadhyay, Vibhuti Bandopadhyay, Manik Bandopadhyaya, Vimal Mitra and other greats of Bangla literature, she lacked the vision of social justice. Living and working for 33 years in the land of Bengal – the ancient land of art and culture – Mahasweta Devi was deeply influenced by Bangla literature but could never develop any respect for the literature of the Hindi belt. Post-Mandal, the bugle of social justice was sounded in Hindi literature but despite its comparative maturity, Bangla literature remained insulated from it. In fact, Bangla literature does not seem like the literature of entire India but of a specific class of Indians.

Lacking the vision of social justice, Mahasweta Devi, unlike Dr Ambedkar,  could never realize that the problems of the Tribals were rooted in the caste system. It was because of their belief in the caste system that Hindus neither had any sympathy for the Tribals nor did they work for their welfare – as Christian missionaries did. Instead, they mercilessly exploited them.

Had she borrowed Ambedkar’s vision to work out a solution to the problems of the Tribals, she would have got better results. As she stuck to a particular way of seeing the Tribal problem, she could not understand the aspirations of the Tribals of the 21st century. She could not say what Professor Ram Dayal Munda, from Jharkhand, says unabashedly: The Tribals should have electricity and all modern facilities so that they can also travel by air, wearing coat and tie, and can drive in cars to shop in malls. In the absence of the vision for social justice, like the middle-class social activists working among the Tribals, she continued to plead that the Tribals be allowed to live in their “natural surroundings”. 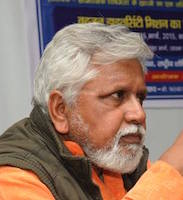