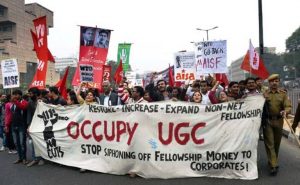 “Scholarship as an aid is better than no aid at all.”
Babasaheb Ambedkar, Sampoorna Vangmay, Vol 3, p 63

Human relations change with time. Similarly, the exploitative machinery of the caste system, which is a product of the Varna system of the brahmanical Hindu religion, also keeps on changing. The form and nature of caste-based exploitation does not remain the same. In India, the ways and means of exploiting Dalits, Tribals, OBCs, minorities and women have been changing. The severity and extent of caste-based exploitation has declined post-Independence but as expected. The nature of social, economic, political and educational exploitation has also changed and “educational and institutional exploitation and harassment” has assumed new forms. The BJP’s coming to power has only exacerbated this exploitation. Earlier, the exploitation was visible, now it is not.

The exploitation, oppression and violation of the rights of Dalits, Tribals, minorities and women have increased since the BJP rode to power in the Centre on 26 May 2014. The government’s role has been suspect in the cases of the ban on Ambedkar-Periyar Study Circle of Madras IIT, Rohith Vemula’s suicide in Hyderabad University and the so-called seditious sloganeering in JNU. Different political outfits, especially the BSP and the Marxists, bitterly criticized the government and held demonstrations on these issues. As a result, Smriti Irani was booted out from the Ministry of Human Resource Development. Needless to say, policy decisions are inspired by the ideology of the party in power and are not made by an individual or a ministry. We can safely presume that the educational policies of the present government have been adopted after due consideration and discussion within the party and the government.

The BJP government is consistently curtailing the budgetary allocation for education. Most of the Dalits and Tribals studying in institutions of higher learning are the first generation of their families to enter the portals of colleges and universities. But instead of extending more facilities to these students by increasing the quantum and number of scholarships and by providing more hostel accommodation, the government is slashing them. In the fiscal year 2016-17, the budgetary allocation for the University Grants Commission was curtailed by 55 per cent. That translated into reduction in the number of different kinds of scholarships and grants, directly affecting the deprived communities and classes. The UGC gives many kinds of scholarships to students and research scholars. Researchers have been complaining of delays in the disbursal of scholarships under Maulana Azad National Fellowship for Minority Students and Rajiv Gandhi Fellowship for SC/STs. Bhupen Mili of IIT, Guwahati had filed a petition in a court about a year ago against delay in the disbursal of these scholarships. These scholarships, launched in 2005, were given to 667 students every year. In 2015-16, the number was increased to 750. However, from this year, the scholarships for researchers of the ST community have been scrapped. The scholarships are not disbursed in time. It takes one to one and a half years for the scholarships to reach the researchers. The BJP does not tire of talking of “sabka sath, sabka vikas” but evidently, the researchers from deprived communities are not included in its definition of “sab” (all). 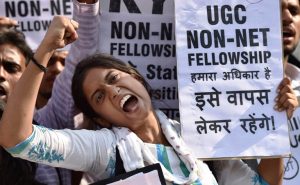 The government planned to scrap non-NET scholarships in 2015. Irani’s argument was that the scholarships were not being used for genuine studies. She said that needy students would be identified and given scholarships either on merit or through a screening test. The government wanted to handpick the recipients of the scholarships instead of giving it to all researchers of all classes. This decision would have affected SC/ST researchers the most. Under the non-NET scholarship programme, MPhil and PhD scholars are given scholarships of Rs 5,000 and Rs 8,000 per month, respectively. This programme was to be scrapped in deemed universities and institutes and would have continued in central universities only. Students’ organizations from all over the country, especially those of JNU students, held demonstrations at UGC and MHRD offices. Teachers and students with no political affiliations also joined the protests. The government accepted the demands of the students and decided to keep the programme intact but it did not increase the size of the scholarships – which it should have. The scholarships at present are too small to cover the necessary expenses of the students and the life of the researchers from economically weak and deprived classes struggle is a struggle.

The process of applying for different scholarships has been made cumbersome and the eligibility criteria are being made tougher. For instance, the Indian Council for Historical Research provides 80 scholarships every year to researchers. Earlier, the students of MA and MPhil were also eligible to apply and they could hold on to the scholarship as long as they enrolled for PhD within a year. However, now, it has been announced that only PhD students can apply for these scholarships.

In another similar incident, the Maulana Azad National Institute of Technology announced that the SC/ST students would be given their mark-sheets and degrees only after they deposit the fees. SC/ST students have been given full waiver of fees. According to the institute, the reason for the change in policy is that the MHRD had refused to bear the cost teaching these students. The graduates of earlier years were given mark-sheets and degrees without depositing the fees. If they were going to ask the students to pay the fees at the end, why did they waive the fees in the first place? Obviously, this not only undermined the objective behind the programme but also put a question mark on the government’s commitment to Constitutional principles. Scholarships are given by a welfare state to help the poor and deprived sections acquire education and move ahead in life. 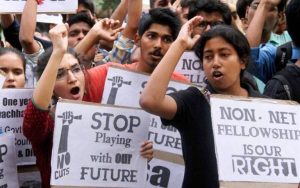 Now Aadhar cards have been made compulsory for applying for scholarships. Not all students in India have these documents. It takes one or two months to obtain these documents. What is the need to make it compulsory to be in possession of these documents? Shouldn’t the government try to avoid unnecessary paperwork and mechanical processes?

The way the government is going about curtailing the facilities given to students is not in keeping with the concept of the welfare state. This would only make the SC, ST, OBC and minority communities resentful towards it. Just as a healthy crop cannot grow on uneven land, an unequal division of resources cannot bring about social equality and justice. The curtailment of the budget for education, scrapping of scholarships and delay in disbursing scholarships meant for SC, ST, OBC and minority communities indicate that the slogan “sabka saath, sabka vikas” and the assurance of “acche din” are hollow. The government would do well to increase the budgetary allocation for education, launch new scholarships and increase existing scholarships. 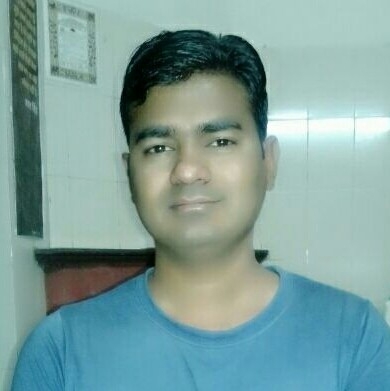 Sumit Kataria is an MPhil student in the Department of History, University of Delhi, where he is researching Dr B.R. Ambedkar’s thoughts and ideas and his contribution to the field of education.