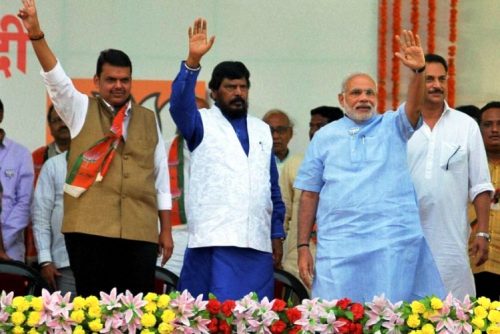 Amid spiralling incidents of atrocities against Dalits and the widespread protests that followed, Prime Minister Narendra Modi accommodated a clutch of Dalit and OBC leaders in his council of ministers last month. This move was seen as a strategic move for consolidating the ruling party’s position in the impending elections in Uttar Pradesh, Punjab and the Municipal Corporation of Greater Mumbai. That this surmise is not without basis was indicated by the stance of Ramdas Athawale, the heavyweight Dalit leader from Maharashtra, who was appointed minister of state for social justice and empowerment. While Athawale is consistently attacking BSP leader Mayawati, he is also freely speaking against the marauding “gau rakshaks” (cow protectors), attacks on Dalits and the talk of tinkering with the Constitution – thus filling up the opposition space inside and outside of the NDA. He is also trying to emerge as the tallest Dalit leader of the country. Excerpts of his candid conversation with Sanjeev Chandan:

Congratulations on your appointment as a minister. It is being said that the BJP intends to use you as a “protective shield” and that is why you’ve been made a minister. In Mumbai, the house of Dr Ambedkar was razed; Dalits are being assaulted in the name of cow protection and Dalit students are being harassed in universities. You have been mandated with the task of cooling down Dalit tempers.

Since Ambedkar, I am the first leader of the Republican Party to have been appointed a minister. What Congress could not do in 67 years, Narendra Modi has done. I am not a person who would remain glued to the chair. I live and work among the ordinary people. I know what the problems of the people are. I know what problems the farmers, the Dalits, the farm labourers and the women are facing. So, if I have been appointed a minister, it does not mean I have become a big man. Those who say that Athawale is running after ministership are talking rubbish. If the BJP has formed the government with our votes, why should we not get a share in power? It is true that the BJP is the biggest party (of the coalition) but it is also true that it has come to power with the help of our votes. So it is logical that the BJP should get more benefits but our party, our workers should also get some. Elections are due in UP. In that state, Mayawati has gained ground at the expense of the RPI. We were a part of the Chaudhary Charan Singh government. We had 19 MLAs then. Mayawati has even snatched our elephant symbol. We will go to the people, we will tell them that we are supporting the BJP but we have not abandoned the green flag.

But power is in the hands of Brahmins. All the cabinet ministers are Brahmins. Dalit-OBCs have only got MoS positions. You yourself are the third MoS in your ministry.

How is power in the hands of Brahmins? Narendra Modi is an OBC. In any case, it is wrong to say that all Brahmins are casteist. There were many Brahmins in Babasaheb’s movement. Babasaheb had also said that he was against Brahmanism, not Brahmins.

Do you think no Dalit-OBC deserves a cabinet position, ie no one except Ram Vilas Paswan?

I intend to fulfil the responsibilities given to me. My department is the department of Dalits-OBCs-Tribals – of 85 per cent of the people of this country. We will try to bring about their development. We will try to ensure proper implementation of the policy of reservations. If the poor of the upper castes and castes like Marathas, Jats, etc are granted 20-25 per cent reservations, without chopping the present quotas, the problem will be solved. The general category candidates can compete for the remaining 20-25 per cent of the posts. As for the Supreme Court, it is not the final arbiter of everything. If my ministry or any other department tries to have such a law promulgated, it will be good.

What about the controversy over the razing of Ambedkar’s house?

That house, that land – belonged to People’s Improvement Trust founded by Babasaheb in 1946. Brihanmumbai Municipal Corporation had served notice on the trust. The trust was told that the building was dilapidated, that it should be renovated and strengthened. Of course, it should not have been suddenly demolished in the night.

Babasaheb’s printing machine was destroyed. On one hand, everything associated with Mahatma Gandhi is treated as heritage, on the other…

What do you mean destroyed? The bulldozer entered the building and the structure collapsed. A seven-storey building will be constructed there. Rs60 crore has been sanctioned for it. The issue is being unnecessarily given an emotional twist.

But assaults on Dalits are also growing.

It is not anything new. This has been happening for long. There is casteism in the country, due to which such things take place. Atrocities were committed during the Congress rule too. Till there is casteism, atrocities against Dalits will continue. We will have to come together to battle casteism.

But how will you convince your constituency? You had to face protests in Hyderabad over the Rohit Vemula issue.

I had taken a clear and tough stand on the Vemula issue. I had demanded a CBI probe. I had said that whosoever is guilty – whether VC Appa Rao or Minister Bandaru Dattatreya – should be punished. Dalit students have committed suicide earlier too. At that time, this government was not in power. The then HRD minister Smriti Irani did not handle the Vemula issue well. The students told me that I should break my ties with the BJP. My reply was that ours is not an ideological coalition. If the situation so warrants, we can leave the BJP’s side. We did not remain with the Congress either. I am not a blind supporter of the government.

But the question being asked why people like you, who were associated with Dalit Panthers and its founders like Namdeo Dhasal, the rebel poet and founder of Dalit Panther, have joined hands with the Shiv Sena?

We had come into politics with dreams of bringing about a change but we have to make adjustments. Didn’t Sharad Pawar form the government with the Jan Sangh? While launching the RPI, Babasaheb had made it clear that it would oppose the Congress. But he lost the 1952 elections. After that, Babasaheb said that they should take everyone along. Balasaheb Thackeray told me that the Congress had always done injustice to us and that we should go with them. This is a political coalition, an adjustment. We are not going to get caught in any trap.

But how will you justify joining hands with Hindutvavadis?

Will you stop Dalits from coming to power in UP?

No. The BJP coalition will form the government in UP and we will be part of it.

Your presence in the electoral arena will harm Mayawati.

Mayawati had harmed us.

Our culture is Bahujan culture. Given BJP’s stand on the Mahishasur issue, isn’t it imposing brahmanical culture on the country?

It is improper to celebrate a murder?

About two and a half years ago, you had talked of 15 per cent share in power. Have you got it?

They had promised 10 per cent. They will do it. A beginning has been made.