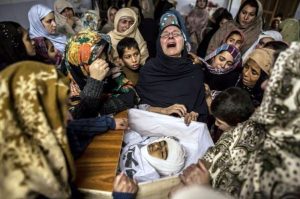 Our defence minister says that Pakistan is like hell. One can well begin by asking whether the honourable minister knows what hell is. Has he visited hell? Heaven and hell exist only in our imagination. As Ghalib had famously remarked, “Hum ko maloom hai jannat ki haqiqat lekin, dil ke behlane ko Ghalib yeh khayal achcha hai” (We know the reality of Paradise but, O’ Ghalib, it is a good thought to beguile the heart).

The fact is that it is the circumstances that make us feel that we are living in hell or heaven. Such circumstances exist not only in Pakistan but in all the countries of the world, including ours.

In 2013, I got an opportunity to visit Pakistan. A US-based organization, which works for promoting values of secularism and harmony in Asia, had decided to confer its annual award on me. Karachi in Pakistan was selected for holding the award ceremony. Besides me, Sheema Kirmani from Pakistan was chosen for the award. Sheema trains girls in classical dances. Pakistani dictator Zia-ul-Haq had ordered her to stop teaching Indian classical dances to Pakistani girls. She flatly refused and told Zia that first he should stop attending “mujras” and then she would stop teaching classical dance to girls. Are such committed and courageous persons found in hell?

Many people attended the award ceremony. They included litterateurs, poets, lawyers, teachers and journalists. Such a function can surely not be held in hell. I stayed for a fortnight in Pakistan. I did not know who paid my hotel bills and who paid for my taxi rides. I went to the Anarkali market in Lahore to purchase some dresses for my daughter-in-law and my granddaughters. When the shopkeeper came to know that I was from India, he straightaway halved the prices of the dresses. Can a hell boast of such generous hosts? During my stay in Pakistan, I got an opportunity to attend a literary festival in Lahore. Indian classical dances were presented in the fest. There, we also saw a play on Saadat Hasan Manto. The brochure of the fest included some satirical comments on the Pakistan government’s cultural policy. Can the inmates of hell dare make fun of the arbiters of their destiny? Each day of the fest concluded with a band recital. After the recital, vociferous slogans of “Dahshatgardi Murdabad” (Down with terrorism) were raised. The youth raising the slogan appealed to the audience to raise the slogan so loudly that it could be heard in all corners of the country. Do such things happen in hell?

We had long conversations with the Pakistani youth. All of them said that driving out Hindus from their country was a grave mistake. If Hindus had stayed back, their country would have remained secular and progressed like India had done. Are denizens of hell so mature and so wise?

There is a law in Pakistan that makes blasphemy punishable by death. It is often alleged that this law is misused to settle personal scores. A Christian woman was charged with blasphemy and was jailed. Salman Taseer, the governor of the Punjab province, took a stand in favour of the woman. He visited the prison to meet her. Taseer’s stand angered the fundamentalists. After some days, a member of his security detail, murdered him. Salman Taseer’s exceptional courage and commitment to principles must have surely won him a place in paradise. Describing a country where people like Taseer lived as hell is surely being dishonest.

Then, if the defence minister believes that Pakistan is hell, he should stop his colleague Ram Madhav from talking about “Akhand Bharat”. Why does Ram Madhav want to make hell a part of India? Manohar Parrikar should also denounce Narendra Modi for inviting the prime minister of hell to attend his oath-taking ceremony. He should have criticized Modi for making an unscheduled stopover in hell to meet the prime minister of hell and his mother.

Mr Parikkar, no country in the world is absolute hell or pure heaven. Pakistan has been witness to some events that probably don’t take place even in hell. For instance, the killing of hundreds of children in a school in Peshawar, or the murder of namazis in Lal Masjid or the murder of Benazir Bhutto. 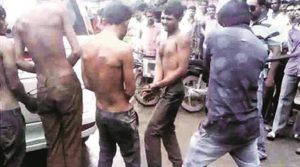 Probably, Parikkar believes that India is paradise. But let him ask the Dalits of Una, Gujarat, who were mercilessly thrashed and dragged after being tied to a car for skinning a dead cow. When they were facing this horror, they must have surely thought that they were living in hell.
When Sikhs were being massacred in 1984, they must have surely thought that India had turned into hell. When the Muslims were being slain in Gujarat in 2002, they must have wondered whether they were living in hell. What must be passing through the minds of small girls and women when they are being raped? What must adolescent girls be feeling when they are being pushed into prostitution?

So, Mr Parikkar, no country can be described as hell. Every country has its own heavens and hells. What is important is how many voices are raised against hellish circumstances and what is done to change them.

By describing Pakistan as hell, Parikkar has insulted those citizens of Pakistan who are working to do away with the hells of Pakistan. Such persons included great Sufi singer Amzad Sabri, who was cruelly done to death. Sabri used to spread the message of Sufi saints through his ethereal songs. Murdering such a person is definitely a hellish act.

How long will we go on fighting with each other? Whatever may be the attitude or the compulsions of the rulers, the ordinary people of both the countries will have to work for peace and harmony. In this context, I salute Kannada film actress and Congress leader Ramya who showed the courage of saying, “Pakistan is not hell. The people of that country are just like us. I had recently visited Pakistan and never did I feel that I am in hell.” For this statement, she has been accused of sedition. I strongly condemn those who filed complaints against her. Our Constitution enjoins us to build friendly relations with other countries. So long as we have diplomatic relations with a country, we cannot call it an enemy. In fact, those who are hurling allegations at Ramya are violating the Constitution. And this is a serious offence. 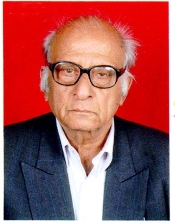 L. S. Herdenia is a journalist and a social activist committed to secularism.