Earlier this year, members of a vigilante group mercilessly thrashed Dalit men in Una, Gujarat, for skinning a dead cow. This is not the first instance of violence against Dalits. They have had to face atrocities earlier in other states, too. 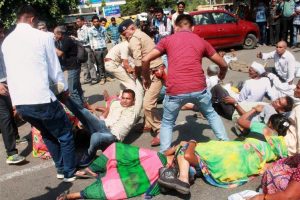 Violence against Dalits is the manifestation of a deep structural prejudice against this community. More importantly, it is an expression of the power that the dominant groups have over the deprived sections. Groups like the “gau rakshak dals” have been emboldened by the BJP’s ascendance to power. The fact that the police watched this spectacle of violence silently sends a chill down our spine. It reminds us of Ambedkar’s apprehensions about the implementation of a Constitution that was “more enlightened than the society it was drafted for”.

The dominant castes cannot tolerate any kind of assertion and resistance from a Dalit group. They see the rise of Dalits as a threat to their power. The violence against Dalits emanates from the brahmanical traditions that legitimize, justify and valorize caste-based hierarchies and discrimination. For instance, the Brahmanical/dominant forces interpellate as Untouchables those Dalit castes that are engaged in cleaning, skinning dead animals and manual scavenging. The edifice of Swachh Bharat Abhiyan hinges on Dalit labour. Unfortunately, there is a constant harping on development and modernity, but Dalit communities are hopelessly trapped in these stigmatized jobs. Recently, Bezwada Wilson, the Magsaysay award winner, said that 1.8 lakh Dalits were manual scavengers. The Government of India has not shown any willingness to invest in technology to do away with manual scavenging.

The brahmanical-feudal forces seem unmindful of the fact that India is a diverse, pluralistic, multicultural, multilingual and multi-ethnic society. Any attempt by the brahmanical forces to impose their hegemonic idea of an Indian culture on people constitutes epistemic violence. What is especially disconcerting is their use of physical violence to “discipline” Dalits and intimidate them to fall in line. Their attempts to coerce Dalits to stop killing cows do disservice to Hinduism. This will turn Dalits against Hinduism. In fact, the chief aim of Dalit movement in India is equality, and freedom from casteism. They want to stay within the same society but with dignity and equality. 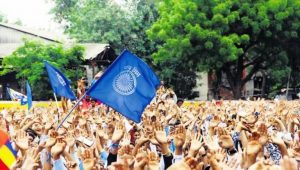 In his speech in 1927 in Mahad, Ambedkar had remarked: “Hence, if Hindu society is to be strengthened, we must uproot the four-castes system and untouchability, and set the society on the foundations of the two principles of one caste only and of equality.” The struggle of the Dalit community is against brahmanical Hinduism. They are fighting against caste hierarchy and power, and untouchability. The Una incident has galvanized the entire Dalit community in the state. It has turned into an experience of the masses. Dalits in Gujarat have come out on the streets to register their protest. A Dalit mahasammelan was held in Ahmedabad on July 31 to express their solidarity with the suffering brethren and to jolt the government out of its complacency. In this gathering, it was underlined that landlessness makes Dalits so vulnerable. Landlessness lies at the root of the untouchability, discrimination and untouchability. This mahasammelan reminds us of the massive gathering during Mahad Satyagraha led by Ambedkar in 1927.

The participants of the mahasammelan demanded that Dalits be treated on a par with everyone else (equality), and that casteism and violence against Dalits be brought to an end. Importantly, Dalit-Muslim unity emerged, showing that Dalits and Muslims are victims of the same oppressive structures.

The first instance of Dalit mobilization in Gujarat can be traced back to anti-reservation Riots of 1981 and 1985. Dalits were beaten up by caste Hindus during this agitation. Patels had then protested against reservation for Scheduled Castes and Scheduled Tribes in educational institutions and government jobs while in August 2015, the Patels took to the streets demanding reservation for themselves under OBC category.

Dalit movement is a battle against violence, and the power and traditional morality of caste. Dalit movement is essentially a non-violent and democratic movement. It is a battle against brahmanical Hinduism. Even Ambedkar was against casteism, not against the “upper” castes. Being a true nationalist, he worked for the unity and integrity of the Indian society. He worked hard to bring Dalits and non-Dalits together in the national space by addressing the inherent contradictions in our society. But an attempt is being made by some polarizing, divisive and extremist forces to pit Dalits against the “upper” castes. This is absolutely against Babasaheb Ambedkar’s vision.

Mukesh Kumar Bairva is an assistant professor in the Department of English, PGDAV College, University of Delhi