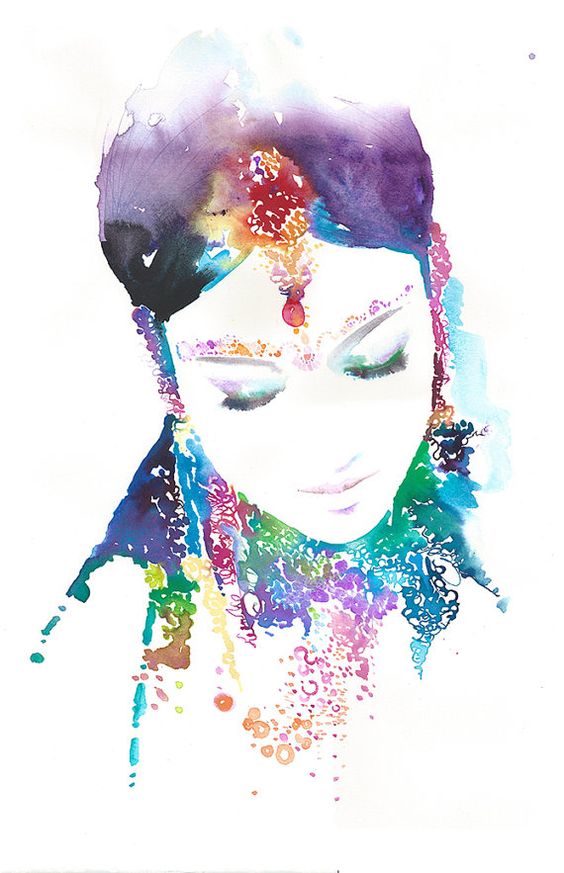 Sisters, we are caught in a web of superstitions. It has enslaved us. Without breaking free from it, we cannot tread the path shown to us by Dr Ambedkar. We cannot become emancipated. Some children wear black threads, some red threads. Ask their mothers and they will tell us that it protects them from the evil eye. Ask the boys and they will tell you it is fashion. Yesterday, we were at Salimpur village. I asked a kid, “Why have you tied this black thread on your hand?” He said, “It is the thread of Trilokinath.” I asked, “Who is Trilokinath?” He said, “Trilokinath is the master of the three worlds”. I asked, “Trilokinath did not ask you to study?” He said, “I gave up studies after high school.” I said, “Trilokinath did not tell you that he is the master of three worlds, so you should become the master of at least one by educating yourself.” He did not utter a word. You are not telling your children whether power lies in this thread or in the pen that Babasaheb gave us, in the rights that he gave us. To you and for me, who are born into the Chamar caste, what harm can the evil eye possibly do.

The Brahmins had tied a bone from this thread. And I am talking of the period after Independence. A bell was hung from this black thread; black anklets were tied to our feet. You know why? Because we were Untouchables and they wanted to be alerted by the sound of the anklets and the bell when an untouchable walking the streets was headed their way. Even if our shadow fell on them, they would have to go home and take a bath. A pot was hung from our neck and we could spit in it only. We were not allowed to spit on the roads. A broom was tied to our waist so that as we walked, it cleaned our footprints. If a Brahmin stepped on our footprints, he would have to go back to his home and take a bath. You think you have got all these rights just like that. Babasaheb had struggled, Babasaheb had written the Constitution and that was why the Brahmins had to remove the bell from our necks, the anklets from our feet. This is the thread of slavery. Break it and throw it away. As soon as the Brahmin sees this black thread around your neck, he asks your caste. And you don’t know where to hide yourself. How can you tell anyone that you are a Chamar? How?

I hold a senior position – but our castes never change. I had been in my job for seven months when Brahmins broke open the lock of the room where I was putting up and threw out all my belongings. You know why? Because I was a Chamar woman and I was running an awareness campaign there. They wanted to teach me a lesson. I had to spend the night on the streets. At that time, I was unmarried. The next day, I got the incident published in the media, lodged an FIR. But I can never forget the night that I had to spend on the streets. I then realized this: when this can happen with an educated woman like me, what must be happening with the people of my community? I felt that I was needed there. You needed me. Then I decided to work among you. One day, a Pandit ji, a Trivedi ji, came to the department. I was the only Chamar in the staff. When the head of my department was introducing us, he said, “She is new to our department. Her name is_______.” The Pandit ji could not guess my caste by my surname. He began looking questioningly at me. I asked him, “Do you want to know my caste?” He was taken aback. “No, no madam. That is not so.” I said, “Sir, you people say that women have no caste, don’t you? My mother was a Brahmin and my father was a Chamar. The Brahmins are so shrewd that if they find that a Chamar boy is a suitable match for their daughter, they readily marry her off to him. My maternal grandfather was such a Brahmin. He thrust his daughter on my father. Now you tell me sir, what is my caste?” Sir was crestfallen. He could not utter a word. He had no answer. You have to make your children strong enough to give such replies and not try to hide yourself when anyone asks your caste. The black thread around your neck will not give you strength because when a Brahmin sees it, he immediately realizes that this person is my slave, my pet dog. Stop fearing these threads. Brahmins have thrust these threads upon women. Did you get married according to Buddhist religions rites or Hindu religious rites? According to Hindu rites … OK, let me tell you about my marriage. I was married according to Buddhist rites. Ambedkar was witness to my marriage. Now, when you get married with Buddha and 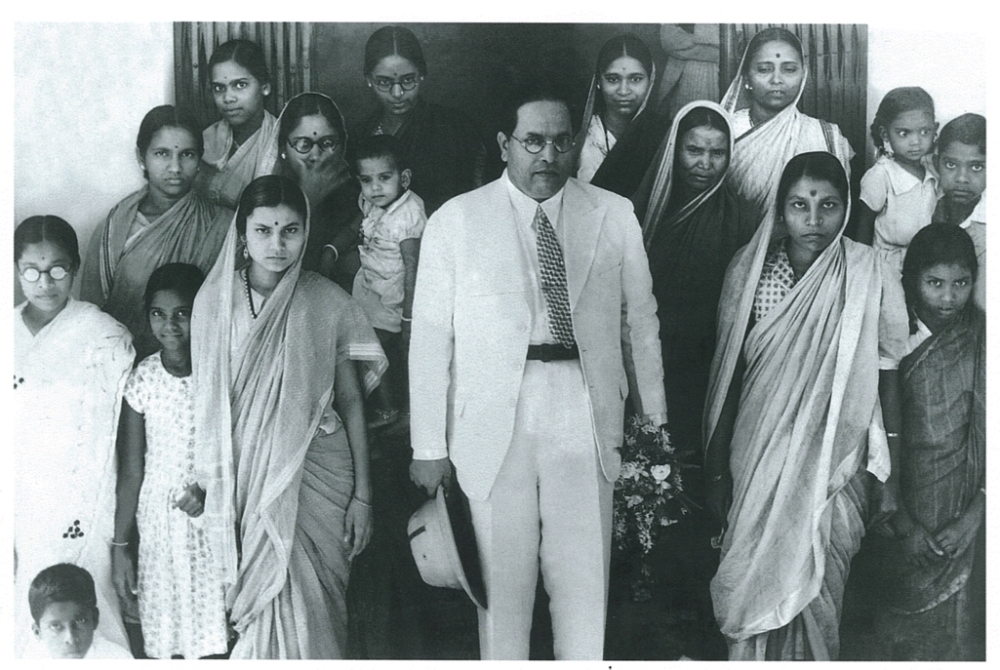 Ambedkar as witnesses, the husband and the wife have equal rights. Lord Buddha says that men and women are equal. If vermillion is put in the parting of women’s hair, why not men’s too? After all, they are also getting married. It may sound funny, but when women are made to wear toe ring, why not men? After all, both are getting married. But the man remains the same all his life. We live different lives before and after marriage. Our persona is transformed. As if we have become beauty queens. The brides are made to wear so much jewellery that they cannot even walk without the help of two people. Isn’t it? The women have no experience of wearing such heavy dress, such heavy jewellery. She has to take the support of others to walk. I was married with Buddha as witness. In this kind of marriage, the man and the woman have equal rights. The women are not made to wear vermillion or toe ring. Our looks remain the same before and after the marriage. We are each other’s associates, each other’s friends. Had I got married according to Hindu rites, my husband would have told me, “Why do you keep on travelling from village to village in this hot summer? Stay at home, bring up the kids, and serve my parents.”

When I was married, I also did not know this. I was wearing lots of jewellery. I reached my in-laws’ place. During “mooh-dikhai”, I asked the older married women of the family: “You all are my mothers. You are my mothers-in-law and also mothers. Just answer one question: ‘Because of whom am I wearing gold and silver ornaments all over my body?’” One of them answered, “Your father-in-law is an engineer. It is because of him. He has given them to you.” I said, “You are perfectly right. Now, tell me because of whom is my father-in-law working as an engineer?” One of them said, “He is educated, so he has got the job.” I said, “Tell me how my father-in-law could acquire education.” One said, “There is a school in the village. He studied there.” I said, “You are again right. Just tell me who got my father-in-law the right to study in the village school?” Now, a silence descended on the group of people. But one little girl got up and said, “Babasaheb gave us the right to study in schools”.

I was visiting the house of my in-laws. I saw a picture of Nirankari Baba hanging on the wall. I asked her, “When Babasaheb had given you everything, the pucca house in which you live, the rug on which you are sitting, why do you have a photo of Nirankari Baba? If untouchability has really ended, it should show. Why we still living in Chamrauti [Chamar settlement]? Why, when Babasaheb has given us the Constitution? These Babas will only befool you. Your emancipation lies in educating your children. Make them strong, not weak. Ambedkar has given you the right to lodge FIRs, not Nirankari Baba. Think for yourself, what these gods and goddesses and Babas gave you and what Babasaheb gave you.”

In the end, I will say one more thing. There was this pradhan of a village – a very attractive woman. She was wearing an amulet. I asked her, “Sister, why are wearing this?” She said, “It’s nothing, Didi. I had fever, so I got this.” I told her, “The next time you get fever, go to a doctor. Amulets can cure no disease. Throw away these threads and amulets.”

I went to my in-laws’ place with these ornaments and that was why my father-in-law and my mother-in-law told me, “You have knowledge, use it to awaken our people.” I did not put vermillion at my wedding. Someone may well say that I am a widow. But my husband is standing beside me. Vermillion has no relationship with any person’s longevity. The women who are not wearing vermillion are considered inauspicious, bad omen. Their presence is resented on happy occasions. Just tell me, a woman is widowed at a young age, she does not remarry for the sake of her children, she brings them up and when her children get married, her presence is resented in the event. Just look at a widow and see me. We both live without vermillion. Women should stop discriminating against each other. Give up antiquated beliefs. If you cannot do it, at least ensure that the younger generation gives them up. Get them education. Take them ahead.

The audio of this speech is going the rounds on WhatsApp.