We are often told, “History repeats itself.” Nothing explains the sentence more appropriately than the Dalit movement launched against the gau rakshaks in Una, Gujarat. Let us first look at what the history was and then how it repeated itself. 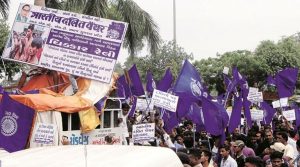 In 1873, the Chandals of Bengal held a strike in Faridpur district, now in Bangladesh. They stopped working for the Hindus of all other castes and for Muslims. The strike brought normal life to a standstill. Its impact was so deep and widespread that official dispatches called it a “general strike”. Still, it was a peaceful, non-cooperative movement. Until then, no one even knew what a strike was. (Meanwhile, Bengal was witnessing a “renaissance” quite unmindful of the sufferings of an untouchable caste in its underbelly. The renaissance was confined to the upper social strata. In 1911, the unfortunate Untouchables were officially rechristened Namasudra, who are now a populous Bengali caste.)

It all began in a village called Amgram, adjacent to Buckergunje (now called Barisal), where a rich and influential Chandal, Choron Sapah, invited 10,000 men to a feast to mark the shraddh ceremonies of his father. He had extended invitation to people of all castes, including Brahmans, Kayasthas, Shudras, etc. The Kayasthas instigated all others against the Chandals and as a result they “refused to accept the invitation, couching their refusal with taunts and reproaches”. They said, “Eat with men who permit their women to go the market and who are employed as mehtars in jails for removing filth and everything unclean? What next!” [1] This is what W. L. Owen, superintendent of police, Faridpur found out after an inquiry. He also noted, “The women of the poorer Chandals attend hauts and bazars for buying and selling purposes, on which account they have been despised by Hindus of the higher caste, who consider them only little better than beasts …” [2] The Chandal women were undoubtedly ahead of their time. Today, women of those classes who hated Chandals and their women now want to be seen in the markets themselves. But the insinuation about their women in 1872 did not go down well with the Chandal community leaders. The aggrieved heads of the Chandal communities, therefore, adopted in a meeting three momentous resolutions: 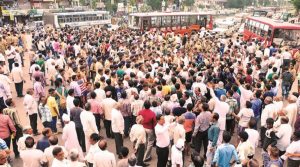 Resolutions concerning the dignity of their women came first. The strike soon drew the attention of the colonial administration because of its disastrous repercussions on the life of the people at large. In a letter of 18 March 1873, Owen speculated the impact as follows:

“if the second resolution [is] literally carried out much injury will be sustained by other castes living in the swamp country. At present, fields belonging to the Mohammedans and other castes are cultivated by Chandals, who for their trouble take half the produce; these would remain untilled. Boats are built and manned by Chandals; these belonging to other castes would cease to ply and trade [would be] paralyzed. Agricultural and domestic tools of iron would not be repaired; and in fact all relations of life between the Chandals and other castes would be completely deranged, enmity would spring up between them and eventuate in breaches of the peace.”[4]

The Chandal strike which began in Faridpur district soon spread to adjoining Buckergunje and Jessore districts when their caste brothers join. The strikers did not, however, resort to violence  and, therefore, peace and order remained absolutely undisturbed. The District Magistrate of Faridpur, W. S. Wells,  who was also asked to conduct a personal inquiry into the strike, reported to the Government that  “… a large body of Hindus and Mahommedans came up to complain to me of the ruinous effects to them arising out of the action of the Chandals”. He recorded in his report that the fields remained untilled, the houses unthatched, and not a Chandal in the service of Hindu or Mahommedan, or a Chandal woman in any market…” (letter No 340 dated 8 April 1873). On a precautionary note, the magistrate informed the government of Bengal that “they (Chandals) have always been united and this movement may become very serious”. 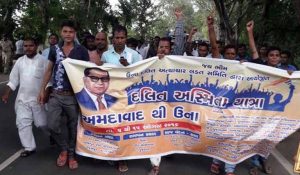 At the root of the strike was the government’s attitude towards the Chandals in prison. They were forced to sweep the jail floors and clean toilets. The district police chief in his letter on 22 April 1873 substantiated that, “It is a most humiliating reproach which should be removed at once … Under our law men are equal, but Chandals have no such equality if they alone as a class are obliged to perform the most degrading duties.” The district police chief noted that the grievances of the Chandals arose from the fact that the “government, on representation of other Hindus, compelled members of their castes, when in jail, to work as sweepers, to clean premises, and to remove all unclean matters …” The Chandals asked, “Why were Brahmans, Kayasthas, Sudras and Mussulmans exempted from the dirty work of jails?” This went against the professed equality in the eye of law. The strike of 7,54,323 Chandals[5] in three districts continued for six months. Lieutenant Governor of Bengal (from 1870-1874) Sir George Campbell issued orders to the effect that “the Chandals in jail should not in future be forced to do the work of sweepers…” (letter No 523T dated 7 June 1873).

More than a century later

Sweepers, skinners and tanners, along with the Muslims, have been the target of the gau rakshaks. Dalits and Muslims have been pushed to a corner. Seventy years after Independence, India has not been able to curb crimes and violence against them. They do not receive justice and fair play even in cases of heinous crimes committed against them. Together, they now look to a political agenda as a defence mechanism and a road map for emancipation. The Dalits and the Adivasis form more than 23 per cent of India’s population but they are blatantly denied justice and dignity by the Hindu upper castes that dominate every inch in the spheres of the executive, legislature and judiciary. Demographically inferior in strength (14 per cent), the  condition of Muslims is far more precarious. However, by refusing to dispose of carcasses, clean streets and remove garbage from public places, they can make themselves seen and heard in the whole country. Thus, Dalits, Tribals and Muslims have come to realize that together they make for a formidable force in the struggle for emancipation from all that impedes their upliftment and freedom and that democracy enshrined by the Constitution of India will come to their aid and deliverance.