The Bhartiya Janata Party (BJP) won with a thumping majority in the Uttar Pradesh Assembly elections on 11 March 2017. It won more than three fourths of the constituencies in India’s most populous state. The BJP leaders have attributed the win to the charisma of Prime Minister Narendra Modi and the party’s policy of “Sabka Saath, Sabka Vikas” (Development for everyone). Political pundits and election analysts have cited other reasons as well. The BJP was able to mobilize the votes of the non-Yadavs, non-Jatavs and non-Muslims since it set out with an assumption that that the Yadavs, Jatavs and Muslims traditionally vote for other parties. The BJP thus concentrated on the other communities for its votes. In order to mobilize these communities, the party resorted to identity politics, to which religion was central. 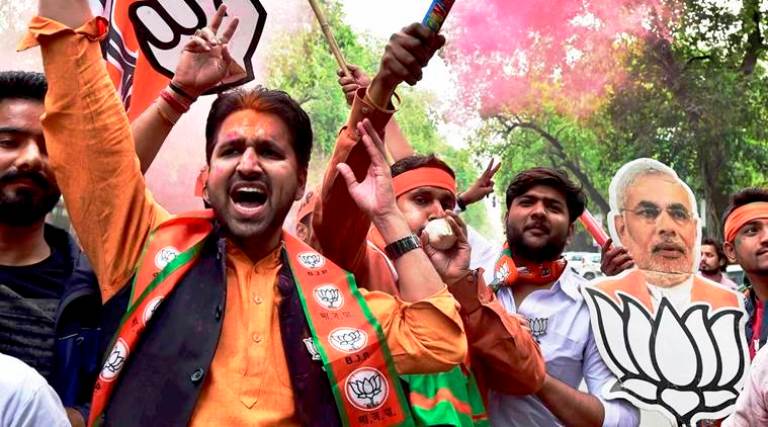 Party workers celebrate BJP’s victory in the UP election

The communal violence in Muzaffarnagar in the year 2013 paid rich electoral dividends for the BJP the following year. The communal polarization enabled BJP to bag 73 out of 80 seats in Uttar Pradesh during the General Elections. While there has been no large-scale violence in the last one year, small incidents took place in Bijnore and some other places. The run-up to the elections witnessed rampant references to religion and hate mongering, with parties banking on communal polarization of votes. Hate speech was one tool available to polarize the electorate.

A classification of the hate speeches provides a framework of analysis of the BJP’s strategy vis-à-vis Muslims. The first set of statements relates to the stated position of the party as also reflected in the official manifesto, which includes construction of Ram Mandir, triple talaq (divorce) and a ban on slaughterhouses. The second set of statements is a response to the perceived policies of the Samajwadi Party. BJP accused the Samajwadi Party of appeasing Muslims and getting them to vote for the party en bloc. This leads to the third set of statements on various issues that seek to demonize Muslims as a community by spreading Islamophobia.

Manifesto of BJP and the statements: BJP’s manifesto had two promises that involved religion and figured in highly provocative speeches. One was the issue of Ram temple and the other of triple talaq. The general-secretary of BJP Yuva Morcha in Uttar Pradesh and the party’s candidate from Maat constituency of Mathura, Kunwar Singh Nishad, said, “Maa ka doodh piya hai to ek eent masjid ke naam par laga ke dikhao, phir hum tumhe tumahri aukat dikhayenge.” This led to an FIR being filed against Nishad for spreading communal hatred. The Ram temple issue has been pivotal to Hindutva politics and never fails to rouse passions. In the build-up to these elections, BJP promised yet again that it will build the temple if voted into power. 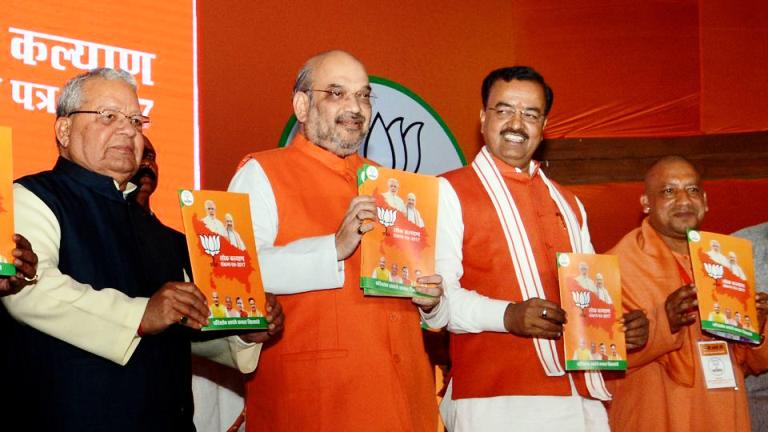 The BJP also promised to push for a ban on triple talaq in the Supreme Court after seeking the “opinion” of Muslim women. It paints the Muslim community as primitive due to, among other things, the practice of triple talaq. BJP MP Sakshi Maharaj was in the news for saying: “This rise in population is not because of the Hindus. Population has risen due to those who support the concept of four wives and 40 children.” This statement resulted in the Election Commission sending a showcause notice to Sakshi Maharaj. Earlier, he had appealed to all Hindu women to give birth to at least 4 children each to increase the Hindu population. He went on to add, “Hindu ghataa aur desh bataa” [A decrease in Hindu population would divide the country].

The manifesto also included issues of Kairana and the cow. These issues were also raked up to spread hatred against the Muslims. What is perhaps most glaring is the impunity that certain politicians enjoy. Muzaffarnagar riot accused Sanjay Baliyan, who is the now Union Minister, stepped up the communal rhetoric by calling for the closing of slaughterhouses in UP. He claimed slaughterhouses are undermining communal harmony. The cow still remains a symbol of nationalism despite the protests that followed the lynching of Mohammad Akhlaq in Dadri and the beating of men who were skinning a dead cow in Una, Gujarat. There has been a countrywide debate on the actions of “gau rakshaks”, which are essentially vigilante groups to which the State is turning a blind eye.

Attack on the policies of Samajwadi Party: Part of the strategy of the BJP had been to accuse the then ruling Samajwadi Party of appeasement of Muslims. What was perhaps the most controversial statement, indicating a new low in the UP electoral landscape, was Prime Minister Narendra Modi’s statement. He said, “Gaon mein agar kabristan banta hai, to gaon mein shamshaan bhi banana chahiye. Agar Ramzan mein bijli milti hai, to Diwali mein bhi milni chahiye. Agar Holi mein bijli milti hai, to Eid par bhi bijli milni chahiye. Bhedbhav nahin hona chahiye.” The intention was clear: to split communities along religious lines by alluding to state government’s alleged policy of spending more on building walls around graveyards against than on constructing cremation grounds.

Demonization of Muslims: BJP MP Yogi Adityanath maintained consistently that if the “exodus” of Hindus from Kairana due to the activities of a “particular community” is not stopped, the region will turn into another Kashmir. The attempt here was to stir up fear among the Hindus about the presence of the Muslim community in Western UP. Fact-finding exercises carried out by civil society organizations and investigations by the then government of UP all pointed out that the list of the names drawn up by BJP MLA Hukum Singh was flawed. Most of the people listed had migrated to neighbouring areas in search of better livelihood opportunities, while their families still continued to reside in Kairana. Others had had died and still others continued to live in the area. 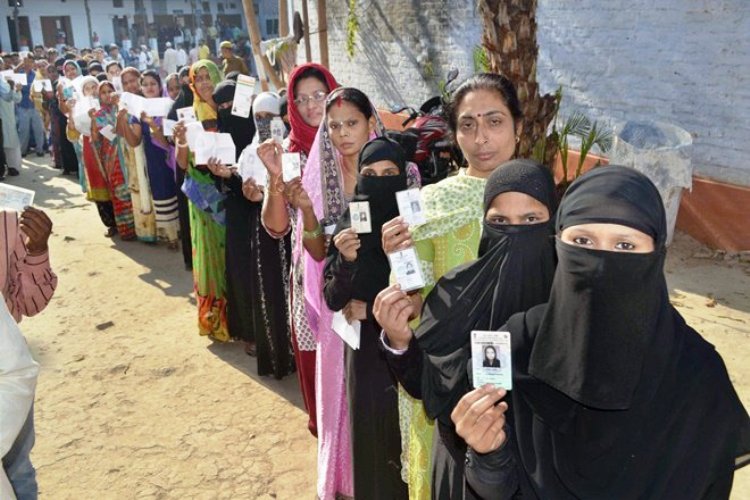 Women queue up outside a polling booth

The campaign against “love jihad” has been going on for some time. In order to demonize the Muslim youth, the myth being told is that Muslim youth mislead Hindu girls and marry them in order to convert them forcefully into Islam. In order to deal with what BJP terms as a “social evil” it has come up with a strategy to form “anti-Romeo” squads. BJP President Amit Shah said the purpose of such vigilant squads was to prevent “harassment of young women students”. BJP’s national co-convenor Sunil Bharala also did his share of provocative speeches. Once, he said, “Love jihad targets innocent girls and lure them. The Muzaffarnagar riots took place because of this love jihad.” While the former SP government claimed that Dial 1090 helpline has been a success, BJP persisted that if voted to power they would form such squads instead. “Honour” and “chastity” of Hindu women in reference to Muslim men was constantly brought up. This narrative not only stereotypes Muslim youth but undermines agency of women and their freedom of choice.

While the issues of Kairana and “love jihad” were used to spread Islamophobia, other issues were used to decitizenize Muslims to an extent of suggesting their exclusion and eventual externment. BJP MLA Suresh Rana, said, “If I emerge as the winner [in UP polls], curfew will be imposed in Kairana, Deoband and Moradabad.” This led to an FIR being filed against him under IPC sections 505 and 125 for inciting hatred and promoting enmity. He was clearly trampling on the citizenship rights of Muslims. Then, Yogi Adityanath supported US President Donald Trump’s executive order of banning the entry to the US of citizens from seven Muslim countries. Yogi Adityanath believes that similar “extreme vetting” measures must be taken in India to stop terrorist activities .

Polarizing attempts from other political parties: Not to be left too far behind, politicians from other parties too used the rhetoric of religion. Former Uttar Pradesh minister and Samajwadi Party leader Azam Khan indirectly compared Prime Minister Narendra Modi with Ravana. He said, “The king who rules over 130 crore Indians goes to Lucknow to burn the effigy of Ravana, but he forgets that the biggest Ravana is not in Lucknow but lives in Delhi.” All India Majlis-e-Ittehadul Muslimeen (MIM) leader Asaduddin Owaisi, in his campaign for the Maharashtra Municipal elections but also with an eye on the elections in UP, said, “Muslims comprise 21 per cent population in the Mumbai metropolitan region. In the Rs37,000 crore BMC budget, the share of Muslims should be Rs7,770 crore. Elect at least 20 to 25 members of MIM in the BMC and we will get the fair share for Muslim wards.” 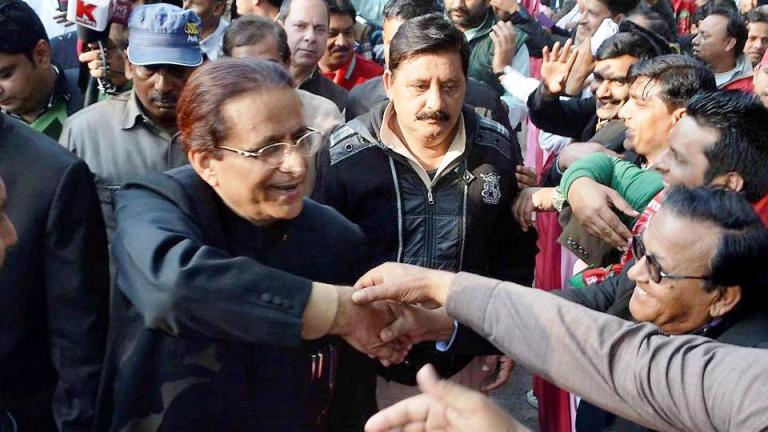 Is election a secular activity?: In a landmark judgment earlier this year, the Supreme Court stated that electoral candidates could not seek votes in the name of religion or caste while interpreting section 123 (3) of the Representation of the People Act, 1951. “An appeal in the name of religion, race, caste, community or language is impermissible under the Representation of the People Act, 1951 and would constitute a corrupt practice sufficient to annul the election in which such an appeal was made regardless whether the appeal was in the name of the candidate’s religion or the religion of the election agent or that of the opponent or that of the voter’s,” read the majority judgment. This judgment, which came as several states awaited state assembly elections, is significant because electoral politics in India is often replete with religious appeals and innuendoes, and religion becomes central to mobilization of votes.

Examining the issues raised by politicians and their statements, one is compelled to back to the aforementioned judgment. The judgment reiterates that elections in an institutional democracy like India must be a secular activity. But all the above statements if deconstructed will tell a different tale. Direct references are made to religion in order to garner votes. Are elections in India truly a secular activity? The underlining character of Indian democracy is secularism, pluralism and equality. When people’s representatives who hold constitutional positions build electoral campaigns based on religion, they polarize harmoniously coexisting communities.

Electoral politics that essentializes religion further entrench religious identities and obscures the discussion of rights in the framework of citizenship and Constitution. Elections and voting is a political right that citizens exercise to protect and reinforce their civic, political, social and economic rights. However, elections contested on the basis of identity politics and religion impinge on fundamental rights of the people. Elections conducted in a polarized and hate-filled atmosphere will hardly result in the strengthening of electoral process or ensuring that a truly representative candidate wins the election and enjoys the mandate. Therefore there is a need to revisit the Act and the recent judgment based on it to put an end to the religious polarization of communities for electoral success.

Neha Dabhade is a law graduate and holds a masters in Social Work from TISS. A human rights activist, Dabhade is presently deputy director of Centre for Study of Society and Secularism, Mumbai 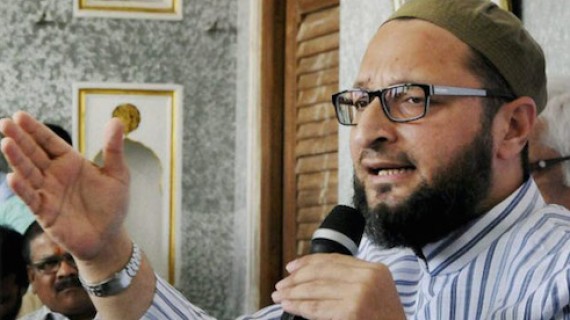 Have Asaduddin Owaisi and the BJP entered into a tacit agreement to turn the nation’s politics into a contest of religious fanatics? 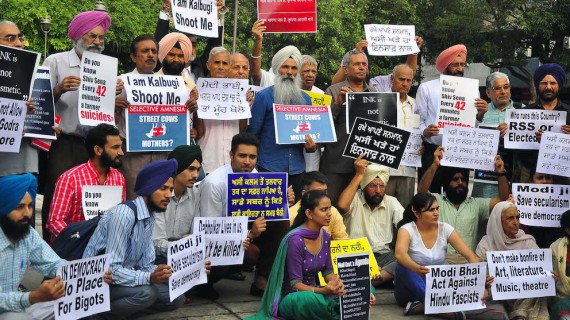