In December 2011, a district court in Russia received a petition that the Gita be declared an extremist text. The news kicked up a storm in the Indian Parliament. Everyone – starting with the champions of Hindutva, even secularists and socialists – was aghast. Predictably, the three Yadavs – Laloo, Mulayam and Sharad – were outspoken in their defence of the Gita. 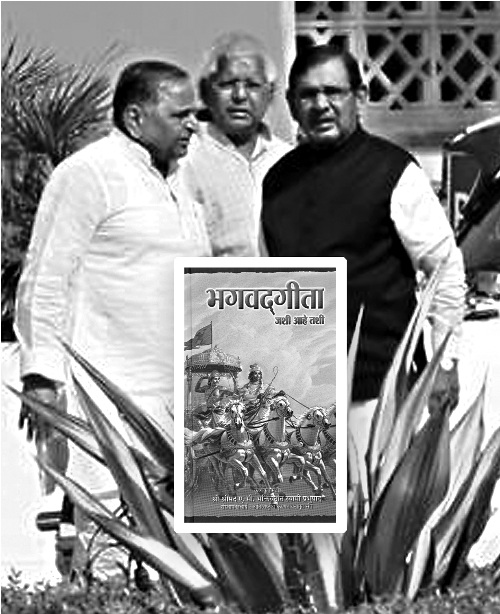 “Gita belongs to Lord Krishna,” Laloo Prasad Yadav said. “The great god of gods, Lord Shiva accorded high position to Krishna ji and Krishna ji did the same in return. Insulting the Gita is insulting Lord Krishna. This must not be tolerated. We will avenge this insult.”

While Mulayam Singh Yadav said the government was not doing enough to educate the people about the Gita, Sharad Yadav joined in: “I consider myself bound to what all the comrades have said [about the Gita]. I don’t feel the need to repeat it. The government should take effective steps to solve this impasse.”

These comrades up in arms for the Gita would have been a confirmation to the Sangh Parivar strategists that they were on the right track, for they had been working on rebranding their Hindutva for quite some time. ‘Exit Ram, Enter Krishna’ (See Pramod Ranjan’s cover story in the February 2012 FORWARD Press) was the formula they had arrived at to make the substantial OBC vote theirs. The OBCs, predominantly the Yadavs of Bihar and Uttar Pradesh, had remained faithful to the leaders of their community and their parties.

Following the BJP’s unexpected defeat in the 2004 elections, its strategists agreed to drop its obsession for kshatriya Ram and embrace Krishna, from whom the Yadavs believe they are descended. The divisive topic of Ayodhya’s Ram janmabhoomi would be replaced by a demand that an idgah be removed from Mathura’s Krishna janmabhoomi.

As the 2007 Gujarat Assembly elections approached, Narendra Modi began appearing as Krishna in unofficial party advertisements. Again, this portrayal was repeated during the 2012 state elections, with the Congress feebly protesting. Once he was anointed BJP’s prime ministerial candidate for the 2014 General Election, Modi never failed to invoke Krishna wherever he went. In Bihar, where Yadavs make up about 12 per cent of the population, he said: “The descendants of Krishna’s Yaduvansh should not worry; I am here to take care of them. Krishna had gone to Dwarka from Mathura; I have come from Dwarka to take care of you, have no worries.” Speaking in Imphal, capital of Manipur, he said, “Lord Krishna was married to [a lady from] a Northeastern family. Rukmini was from the Northeast and Krishna lived in Gujarat.” 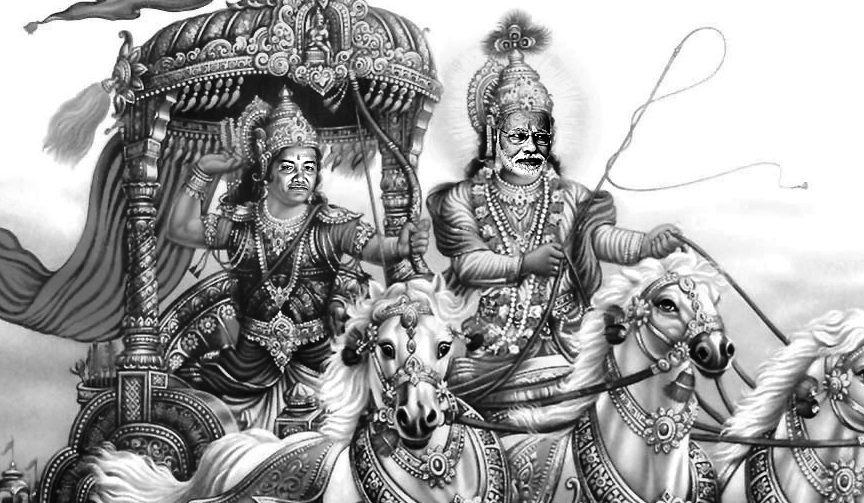 As the media went berserk over the supposed Modi wave, it was easy to be dismissive of it as a strictly urban phenomenon or another India Shining campaign that was going to be a flop show. But few saw the mythical undercurrent that powered the wave into the hinterlands of Uttar Pradesh and Bihar. (This kind of political messaging is known as “dog whistling” to suggest that only the intended audience hears and responds, while it falls on the deaf ears of the rest.) Even the three Yadavs didn’t, and when they did, it was probably too late. Laloo spent much of the second half of 2013 behind bars after he was handed a five-year sentence for one of the fodder scam cases. It was from his Ranchi cell that he helplessly watched Modi woo his people, and when he was released he lashed out: “Dwarka is Krishna’s birthplace and Dwarka is ours. Krishna was born in jail and once out of jail, he destroyed the forces of Kansa.”

Sharad Yadav’s JD(U) colleague and then Bihar chief minister, Nitish Kumar, also ridiculed Modi for invoking Krishna to draw a link between Yaduvanshi (Yadavs) and Dwarka in Gujarat. “First they tried to make Lord Rama their party worker, and they are now trying to do the same in the name of Lord Krishna,” he said.
But it wasn’t until the counting began on 16 May that the three Yadavs realized many of their own people had been seduced by Modi’s Krishna avatar. In Bihar, Laloo’s RJD won 4 out of the 40 seats and Sharad Yadav and Nitish Kumar’s ruling JD(U) was reduced to a rump of 2. In Uttar Pradesh, Mulayam Singh Yadav’s ruling Samajwadi Party bagged just 5 out of the 80 seats, all won by his family members.
From Dwarka, the BJP’s Krishna, seated on his OBC chariot, was well on his way to the prime minister’s office. Then, perhaps, the three Yadavs remembered that day two-and-a-half years earlier in Parliament, when they first played into the hands of a BJP waiting to pounce on them. 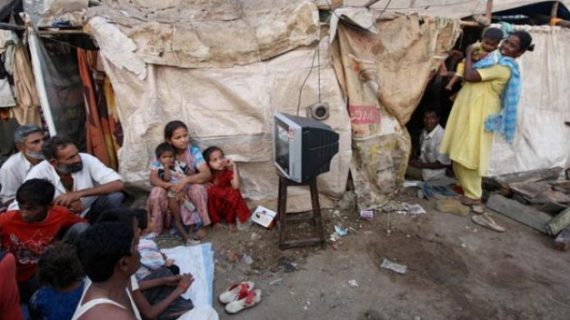 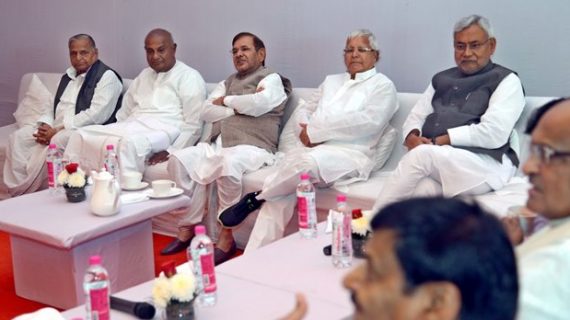 Can the Janata Dal be resurrected? 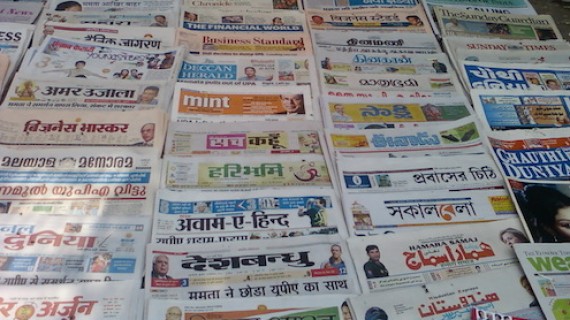 Language as a political tool

The members of the Indian ruling class today use English expediently, enhancing their image while keeping the masses ill informed