Delhi University (DU) has reservations about the books of Bahujan writer, Prof Kancha Ilaiah Shepherd. On 24 October 2018, the DU Standing Committee on Academic Affairs decided to remove three of his books from the syllabus. The Standing Committee member, Hansraj Suman, while confirming this, said that Prof Kancha Ilaiah’s books are insulting to Hindutva. Therefore, the committee decided to remove the books from the curriculum.

The three books of Kancha Ilaiah recommended for removal are – Why I am not a Hindu, Buffalo Nationalism and Post-Hindu India. However, the decision of the Standing Committee has not yet been approved by the Academic Council of DU.

On the other hand, intellectuals have strongly opposed the decision to exclude the books of Kancha Ilaiah. While protesting against the University’s move, Kancha Ilaiah said that even the books of Babasaheb were opposed and termed divisive. 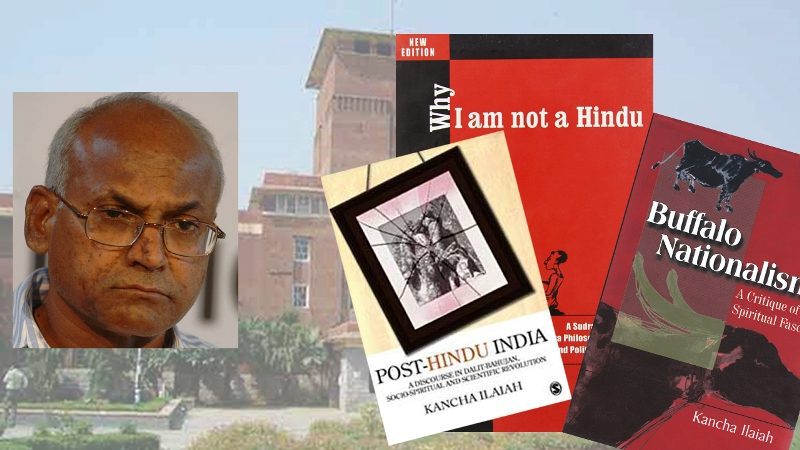 In a conversation with FORWARD Press, he said, “Such attempts are not going to benefit education in any way. In fact, there is a force at play trying to mould things according to its own disposition. We need to be cautious. Such attempts were made against Babasaheb also. His books were also alleged to be promoting divisions in the society. Today, his books are being widely referred to by several universities in India and abroad. Those who had been critical of Babasaheb’s books earlier are now promoting them.”

He adds, “The three books proposed to be excluded from DU’s syllabus have been used as reference material in the curriculum of various universities. They even constitute the curriculum of eminent universities in India and abroad, including the prestigious Cambridge University. But, now a proposal to remove them from DU’s syllabus has been brought. I am deliberately using the term ‘brought’ because this is being done under a well planned conspiracy. In short, the right-wing politics is behind it as it is averse to ‘plural ideas’. Students should be taught basic ideas without any manipulation and the decision on what they have learnt and what conclusions they have drawn should be left to them. They are pursuing post graduation and are fully mature. By now, they have developed the ability to deliberate and decide for themselves.” 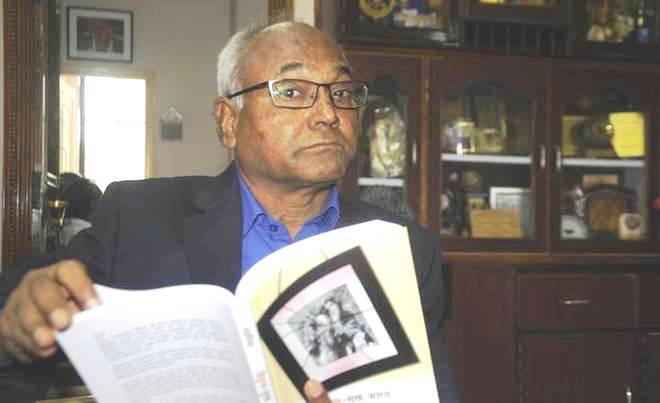 Expressing his dismay, Kancha Ilaiah said, “The Supreme Court has already clarified its stand on the three books proposed to be excluded from DU’s syllabus. According to the Supreme Court, any plea to ban the book will be reviewed strictly because every author enjoys the fundamental right to express his views freely and curbing the freedom of expression of an author must not be taken lightly. A bench comprising the then Chief Justice Deepak Mishra, Justice A. M. Khanvilkar and Justice D. Y. Chandrachud had categorically rejected a PIL filed by a lawyer who had sought a direction to the government to ban the book. The bench clearly maintained that it is sufficient to say that when an author writes a book, it is his right to express himself. We believe that under Article 32 of the Constitution of India, it is not fair that this court prohibits the book. They cannot ban a book on the ground of it being controversial.”

Talking about his book Post-Hindu India, Kancha Ilaiah explained, “In the first chapter of this book, I have written an article titled ‘Social Smugglers’ which discusses various aspects of law and the set-up established by Aryan and Vaishya organizations of two Telugu states. It has been termed ‘social smuggling’. The chapter ‘Social Smugglers’ describes the Arya and Vaishya community as social smugglers. It was translated for the first time by ‘Emesco Publishers’ and a small local bookseller had published it under the title ‘Samaajika Smugglerlu Komatollu’. The booklet was burnt in all the parts of Andhra Pradesh and Telangana to pressurize the government into banning it. There was fierce opposition including threats. The government remained a mute spectator. Thankfully, the Supreme Court ruled in my favour.

This book tells that the process of social smuggling started in post Gupta period of the 5th century AD and it continues to this day. India was colonized under British rule at a time when the caste-restricted business was solely in the hands of the Baniyas (vaishya). Even the Britishers had abstained from intervention in caste-based business including the religious economy around Hindu temples. In essence, this entire process is nothing but social smuggling. It is still continuing in various ways.”

Kancha firmly believes, “The real intention of those who are raising objection to my books is to transform the Indian economy into a monopoly with the entire control lying exclusively in the hands of Baniyas. The ‘Baniya Model’ of Indian business and economic activity is not something new. The Gupta rulers, in the 5th century AD, had introduced the new model and since then the business and economy have been monopolized by the Baniyas. Efforts are made to control every domain that poses threat of any kind to them. For instance, in the context of media, the dominant means of communication, more than half the media channels including various regional channels in the country are owned and controlled by the Baniyas. The most powerful English and Hindi channels are in the hands of Reliance and Adani network. Besides, they exercise indirect control over media by using advertising as a tool. Advertising from the businesses controlled by Baniyas contributes more than 75 percent of the revenue of media business. Even the channels and newspapers outside their direct control cannot stand up to them. The Baniya control over the business and the State power using business as an instrument has a long history. In a way, they have tried to establish their supremacy in accordance with the prescriptions of Hindu spiritual and social system which upholds their role as traders. During the Gupta period, this appeasement was justified through establishing the political power of its own. No other caste was allowed to engage in trading activities in the emerging village agricultural economy. The remaining castes and communities did not have any spiritual or social authority to counter this process and this process continued for centuries. As a result, in the 1960s, a single moneylender family would control all purchase and sale activity in the villages. With such a monopoly at village level, the moneylenders of the village had secured everything for their comfort — a good bungalow, etc. My book describes the old system and relates it to the present system. The move to ban it is baffling. If this is not a strike against the freedom of expression, what is it then? One should recall that the book ‘Post-Hindu India’ was published in 2009. This book contains a series of articles about different castes, which was also translated into Telugu.”

Shashi Shekhar Singh, member of DU’s Academic Council and Samajwadi Shikshak Manch, in conversation with FORWARD Press said, “The attempt to remove critical books from the curriculum is undemocratic and it can potentially compromise the educational standards of the university. On one hand, we talk about promoting critical knowledge and on the other hand, under the policy of ‘Pick and Choose’, we try to exclude books from syllabus that don’t suit our taste. Such designs will not be allowed to succeed. Since the proposal to remove the book has been passed in the Standing Committee and it will eventually be presented before the Academic Council for final decision, we will strongly oppose such a move in the meeting.”

According to Sachin Narayana, a member of DU’s Academic Council, he will oppose the decision of the Standing Committee in the Council meeting. He also accused some teachers of supporting the right wing agenda and claimed that such attempts were being made by teachers who have lost their sense of wisdom and become devotees. They want to carry forward the task of studying and teaching on the same line.

Another member of the Academic Council, Saikat Ghosh, said that last time when the decision to remove the books of Prof Nandini Sundar and Prof Archana Prasad was taken and they were eventually removed due to want of numbers and silence adopted by some teachers. This time it will not be allowed to happen at all.

Sanjeev Kumar, a DU professor, also believes that everything should be taught. There should be a basic idea. Nothing should be negated on the ground that it falls under the category of critiques. Students should be allowed to read and decide on their own.

Objections to the term ‘Dalit’ misplaced

Apart from the three books of Kancha Ilaiah in the syllabus of political science, the use of the term ‘Dalit’ in ‘Dalit Bahujan Political Thought’ has also been challenged. It was asserted that the use of this term has been banned in several states in the recent past. Therefore, it should be removed from the syllabus. Simultaneously, the term ‘Dalit’ should be replaced with ‘Scheduled Caste’ or ‘Ambedkarite’. The proposal has also been passed by the Standing Committee and will now be placed before the Academic Council. In this regard, the Samajwadi Shikshak Manch said that this will also be opposed because the term ‘Dalit’ has no objectionable connotation and it was being unnecessarily disputed. 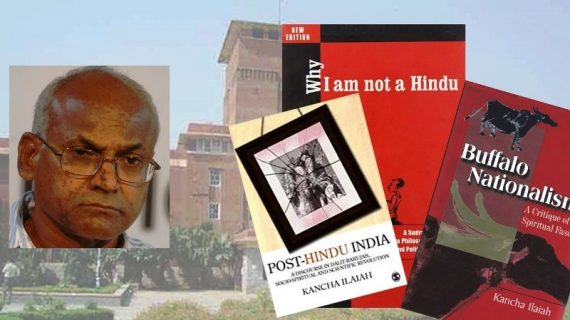 How can RSS tolerate the democratic ideology of Kancha Ilaiah? Why would they want Kancha Ilaiah’s books to equip Dalitbahujans to oppose to Hindu spiritual fascism and inspire them to challenge the building of a Brahmin State? Kanwal Bharti’s analysis 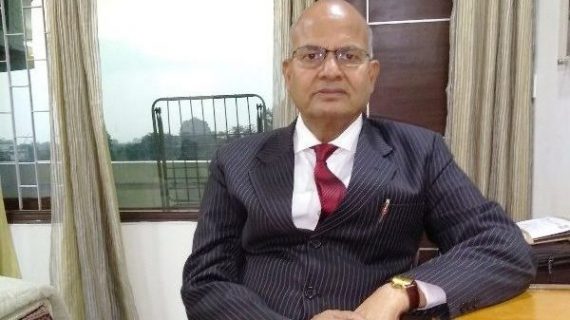 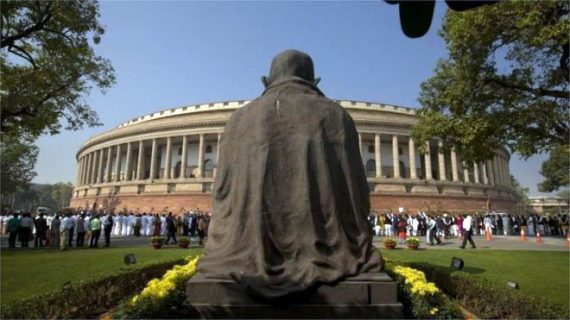