Which form of woman is glorified by the Hindu culture, which form does it denigrate, who does it portray as great and ideal, who does it depict as ‘Kulta’ and ‘Rakshasi’, what is the basis of establishing women as ideal, ‘Kulta’ or ‘Rakshasi’?

Woman-related thoughts are an important aspect of Sangh’s ideology. Vichaar Navneet, written by Sangh’s second Sarsanghchalak, Golwalkar, is considered as its basic text by the Sangh. Solely addressed to the ‘Hindu men’, this book has been written in such a manner as if women do not have their independent existence. However, women come into the picture while it describes the duties of men. While discussing beauty contests, Golwalkar calls Sita, Savriti and Padmini (Padmavat) as ‘Adarsh Bharatiya Nari’ (ideal Indian woman). Among them, Sita and Savitri exemplify the ‘pativrata nari’ (loyal and devoted wife) while Padmini is a ‘pativrata’ Kshatrani (Kshatriya woman) who performs ‘Jauhar‘ (self-immolation to save her chastity). Simultaneously, there are depraved women who fail the parameter of ideal womanhood. Such women are perceived as ‘Kulta’, ‘Rakshasi’, ‘Dayan’ etc. within Hindu culture and Hindutva ideology. 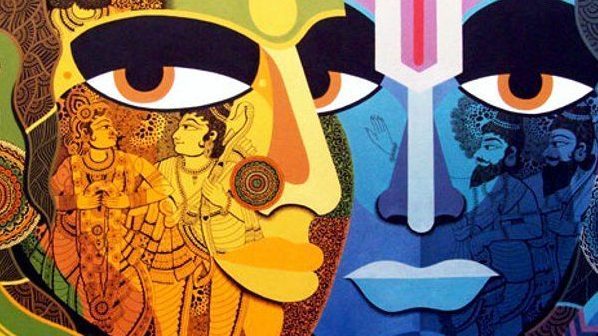 Women in Hindu religion (A painting by Alka Jaiswal)

Golwalkar considers violence and even killing of such women as part of man’s duty. He declares this as the absolute duty of men and portrays Maryada Purushottam Shri Ram as the dutiful man who fulfills this dharma.  In this context, Golwalkar writes in Vichaar Navneet, “One of our highest ideals, Shri Ram is the epitome of this philosophy. Killing of women is considered contrary to Kshatriya dharma. One is also duty bound to take on the enemy openly. But Shri Ram slayed Tadka and attacked Bali from behind… ….. Slaying an innocent woman is sinful but this principle cannot be followed in case of ‘Rakshasi’.” Which woman is ‘innocent’ and ideal and which woman is an offender, flawed ‘Kulta’ and  ‘Rakshasi’ has also been defined by the Hindu theology, myths and epics in detail.

We will discuss it a little later. Let’s discuss Sangh’s woman discourse a little more.

Sangh’s mentor, Golwalkar, says that if a man kills a woman he loves, he presents an ideal. In this context, he relates a story:  “A young man and a woman were in love with each other but the woman’s parents were not allowing her to marry the young man. Therefore, they once met at a solitary place and the young man throttled the woman and killed her. However, the young woman did not experience any pain.” He further writes, “This is the benchmark that we should take into consideration in every such situation.” For Sangh, the Muslims and Christians are the counterparts of rakshasas and mlechchas only.Sangh’s school of thought categorically rejects any demand for equal rights to women. Sangh maintains, “At present, there is a clamour for equal rights for women and their liberation from slavery of men. There is a demand for distinct places for them within various power centres, thereby giving birth to another ‘ism’ i.e. the ‘genderism’ which is similar to casteism, linguistic chauvinism and socialism etc.” This school still upholds the same relationship between a man and woman as ideal, in which threshold of the house is the limit for woman, her duty is to serve the man and in return, the man arranges to fulfil her needs. 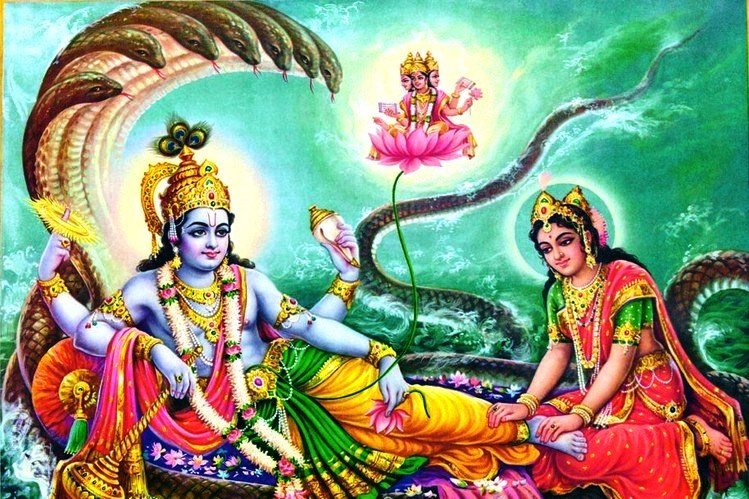 Hindu religion perceives women as objects of gratification. Here, Lakshmi, the so-called goddess of wealth, presses the feet of Vishnu

While presenting this as ‘the ideal’ during the rally of RSS in Indore, current Sangh chief, Mohan Bhagwat said, “Women and men are bound by a contract under the ritual of marriage wherein man agrees that the woman will look after his home and he will take care of her needs. Therefore, as long as the woman fulfills the obligations under this contract, the man should reciprocate. If a woman violates it, the man can disown her. If a man fails to comply with the contractual obligation, the woman should also reject it. Everything is based on the contract.” According to Bhagwat, for a successful marital life, the rule that woman stays at home as wife and man goes out to earn must be abided by.

For its stand on woman discourse, the Sangh school of thought draws inspiration not only from Hindu scriptures, smritis (memoirs) and epics but also from the culture and mindset of the majority of Hindus that doesn’t accept a free and independent woman with rights equal to man even though the Constitution and law treat man and woman at par. The most vivid and heart-rending example of the way women are pushed to subordinate position in Hindu community appeared in the Economic Survey of India 2017-18. It revealed that 6.30 crore girls in India are  killed in the womb before birth. Amartya Sen termed these girls as ‘missing girls’. This number is more than the population of many countries in the world. Not only this, it was also reported in the survey that 2.10 crore girls were born against the wishes of their parents i.e. unsolicited girls. These girls were born as the parents were hoping for a baby boy. The roots of misogyny are very deep and most of the Hindu scriptures, including the epics, justify the misogynist mindset. Rather, they present it as ideal and glorify it. In this connection, the remarks of A.H. Salunkhe, the noted Marathi scholar of Hindu culture, resonate perfectly that “All the Hindu sects and ideologies which underline their distinctiveness vociferously in other matters mostly hold common ground on one issue- the gratification of man is an ‘end’ and woman is a vital means among others to attain this. Therefore, as a resource, there is no question of a woman exercising independent control on thinking about her personal gratification. That’s the crux.”

The ideology of Hinduism extends to several scriptures, Puranas, Ramayana, Mahabharata, Geeta, Vedas and related stories, epics, intersections and myths. All of them assert collectively that a woman should not be independent. Religious texts such as Manusmriti and Yagnavalkya-Smriti have repeatedly reiterated that ‘woman is deprived of independence’ or ‘ineligible for independence’. Manusmriti clearly states that-

That is, the father protects the woman when she is a virgin; the husband protects her in youth and the son in her old age. It implies that the woman does not have the right to freedom at any stage of her life. It is not limited to Manu. Mahakavi Tulsidas, the author of the great epic of Hindus, Ramchritamanas, has blatantly declared that woman gets spoiled when she becomes independent-

In the Mahabharata, it is said, ‘Whether the husband is old, ugly, rich or poor, he is a great honour to the woman. A woman who serves a poor, ugly, foolish, leprous husband attains Akshaya Lok. Manusmriti asserts, ‘Whether a husband is characterless, lustful or virtueless, it is the duty of the saintly woman to serve him like a deity’. Valmiki’s Ramayana also mentions this connotation. In the Parashar Smriti, it is written, ‘the wife of a poor, sick and silly husband who cannot maintain respect towards him turns into a serpent after death and becomes widow again and again.” Hindu Holy Scriptures and epics have a discussion even on petty duties in detail. They even entail prohibition on laughing whole-heartedly.   Tulsidas presents a complete list of duties prescribed for woman in Ramcharitmanas. He presents details even on ‘pativrata’ and ‘adham’ women. Based on this parameter, Tulsidas characterizes some women as ideal and some others as ‘Rakshasi’.

Using Anasuiya Updesh (sermon), Tulsidas describes the character of a woman and her duty in one line as-

(The woman is impure by nature; she attains ‘sadgati’ (salvation) only by serving her husband)

The most celebrated epic of the Hindus considers a woman who does not think of any man even in dreams only to be the true piety. Not only that, Tulsidas calls that era as ‘Kalyug’ in which women start seeking pleasure for themselves and ignoring religious commands.

Among several characteristics of Kalyug as defined by Tulsidas, there are many where women lead their life flouting the obligations set for them by the male society. The main objective of discussing Tulsidas’s misogynist view in a little detail was to underscore that he not only forms an integral part of the Sangh school of thought but also is embraced by many progressive people as ideal poet. At the same time, he is closely entwined with the psychological formation of Hindi-speaking society. In Ramcharitmanas, he has presented most of the retrograde and anti-woman elements of the centuries old Hindu culture as ideals for woman with a high degree of artistry.

It is necessary to clarify here that neither Hindu culture is synonymous to Indian culture nor do all those considered as ‘Hindus’ subscribe to the standards set by the Hindu culture for women. When we talk about Hindu culture, it refers predominantly to the culture of ‘dwijs’. The castes and classes called as ‘Shudra-atishudra, are often excluded from it. Further, the material condition of the women in these societies has not been such that they could practice these ideals. In the words of Shubhra, this reality could be expressed as, ‘the questions around gender and caste are closely interwoven. For the upper caste women, vaginal purity, chastity, sati, purdah, are rituals and rites whereas they are ‘seva dharm’ for Dalit woman under which she has to accept every form of exploitation. Rape and sexual exploitation are an indispensable part of it.” In fact, attempts are being made for thousands of years to define the culture of upper castes among Hindus as Indian culture. The communities that did not follow them were the ones declared as ‘rakshas’ and ‘mlechcha’. As against the ideal women who followed the commands of Hindu culture, the women of the communities that did not accept Hindu culture were only called ‘rakshasi’’ and thus Sita, Sati, Savitri and Anusuya’s were placed against Shurpanakha, Taraka, Holika etc. The women who were ordained as ‘rakshasi’ were as independent in their society as men. They themselves decided who they loved and whom they chose their partner. They decided on their own the relation they wanted to have with someone. They are more powerful than men, they fight wars, they have weapons in their hands and they eat and drink same things as the men in that society. If they like a man, they can express their love without any hesitation. These were not imaginary situations. Even today it can be seen in many tribal societies. Surpnakha, Tadka and Holika etc. are symbolic of such free-spirited and liberated women.

Sangh is the vehicle of Indian dwija Hindu culture, in which subordination to man is the destiny of a woman. 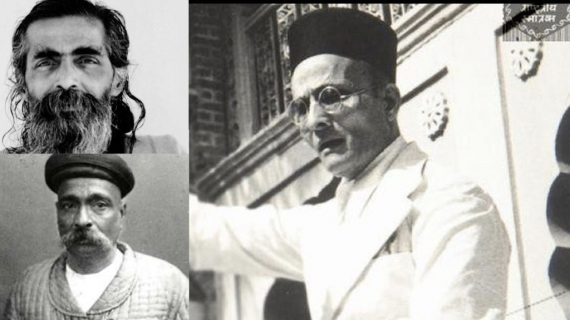 If caste dies, the dream of a Hindu nation dies

Golwalkar’s idea of a nation was the ‘virat purusha’ made up of the four varnas and Savarkar described the ruthless Peshwa (Brahmin) rule as one of the most glorious periods, writes Nagesh Chaudhari 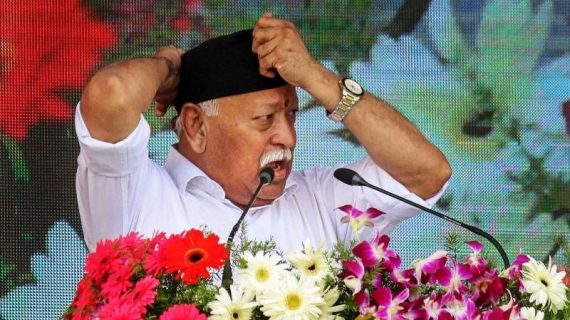