The elections in Madhya Pradesh have thrown up a hung Assembly, though the Congress is all set to form the government, with smaller players such as the Bahujan Samaj Party (BSP) and the Samajwadi Party (SP) extending support. In the 230-member House, the Congress has won 114 seats and the Bharatiya Janta Party (BJP) 109. Two seats have gone to the BSP and one to SP, while Independents have annexed four seats.

For better or for worse, political outfits claiming to represent this or that section of the populace have been firmly rejected by the electorate of Madhya Pradesh,.

They include SAPAKS, an anti-reservation platform. Jai Adivasi Yuva Sangathan (JAYS), which was emerging as a force to reckon with in the Adivasi areas of the state, is firmly sitting in the lap of the Congress. Its founder Dr Hiralal Alawa has won from Manawar (ST) seat in Dhar district as a Congress candidate. 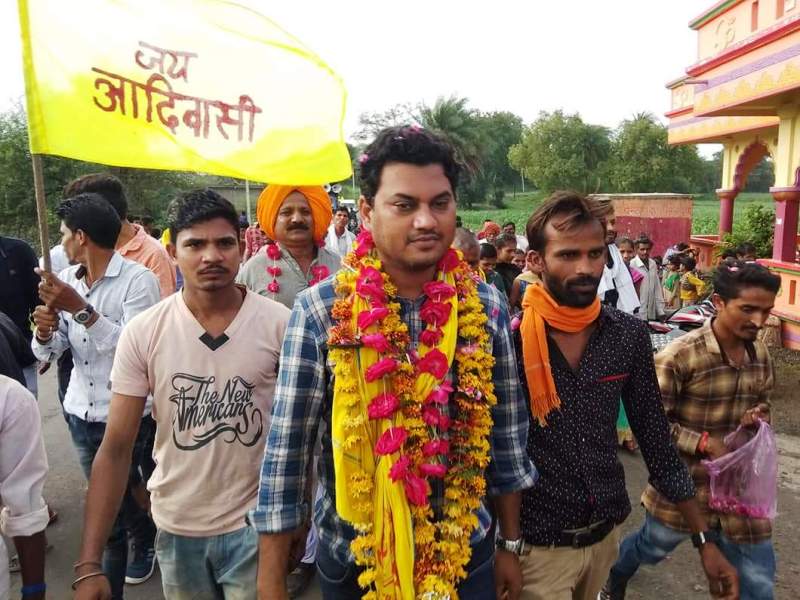 On Gandhi Jayanti this year, when SAPAKS (Samanya Pichhda Alpsankhyak Varga Adhikari Karmachari Sanstha) announced its new avatar as a political outfit and made public its intent to field candidates in all the 230 constituencies in Madhya Pradesh in the Assembly elections, it came as a veritable bolt from the blue for the major players in the state’s political arena.

SAPAKS, which was registered as a society in February 2016, is basically an anti-reservation platform, though it has never clearly said so. Its campaign was woven around the Madhya Pradesh government’s decision to move the Supreme Court in appeal against the Madhya Pradesh High Court’s judgment, delivered on 30 April 2016, declaring reservation in promotions of government employees unconstitutional. 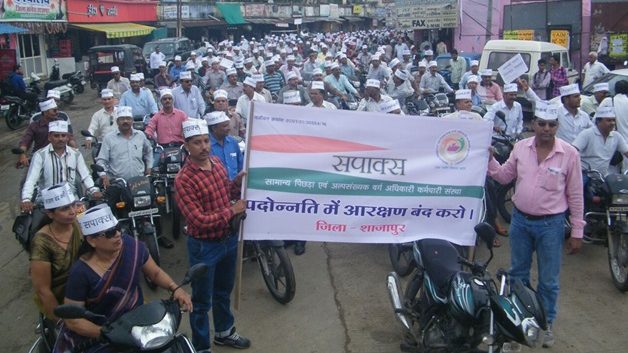 A SAPAKS protest march in Shajapur earlier this year

The high court judgment sparked protests by organizations representing the SC and ST government employees of the state. At a rally organized by one such organization, Anusuchit Jati Evum Jankati Adhikari Evum Karmachari Sangh (AJJAKS), in Bhopal, chief minister Shivraj Singh Chouhan thundered that “koi mai ka lal” cannot end reservations for the SCs and STs. That comment did not go down well with the upper castes – a core support base of the BJP.

SAPAKS decided to cash in on the perception that the BJP, and especially Shivraj Singh, prefer SCs and STs over the “others”. The Modi government’s decision to amend the SC-ST Atrocities Act to upturn a Supreme Court judgment, added fuel to the fire and SAPAKS soon caught the imagination of the people. Sporting T-shirts declaring “Main hu mai ka lal”, its supporters launched a vigorous movement all over the state, primarily targeting the BJP.

Its rallies in Bhopal and Ujjain, earlier this year, were well attended. With the success of the Bharat Bandh called by upper-caste outfits, the organization felt bold enough to declare that it would launch a political party and field its candidates in all the 230 Assembly constituencies.

The party is headed by a retired IAS officer Heeralal Trivedi and most of its top functionaries are also former bureaucrats. It ended with up with egg on its face. None of its 110 candidates could win and worse, all forfeited their deposits. It could garner a measly 0.4 per cent of the votes.

In fact, unlike in other Hindi-belt states of Uttar Pradesh and Bihar, identity-based parties have always failed to win the support of the electorate in Madhya Pradesh.

The latest poll results have again underlined the fact that the essentially bipolar polity of the state is intact and the “third force” has failed to dent it. This time, the BJP and the Congress together garnered 81.9 per cent of the votes, up from 81.2 the last time. In 2008, between them, the two parties had received 70 per cent votes. 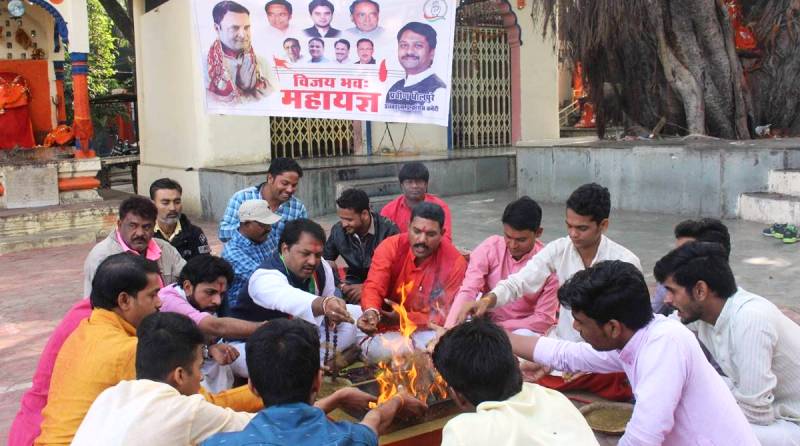 Behenji was hopeful of playing a kingmaker in the state this time round but her dreams lie shattered. Only two of its 227 candidates could win. Before the polls, she had rejected Congress’ overtures for an alliance but after the results, she offered “unconditional” support to the Congress – something the Congress hardly needs.

The SP also met a similar fate. Only one of its 52 candidates could go past the finish line and the party could garner only 1.3 per cent votes.

Alawa jumps on the Congress bandwagon

Hiralal Alawa, an Adivasi, who, as the top man of JAYS, had created ripples with his slogan of “Abki Bar Adivasi Sarkar” (An Adivasi government this time around) figured that wouldn’t be possible just in time and accepted Congress’ nomination.

Dr Alawa, 35, had quit his job as an assistant professor of rheumatology at the All India Institute of Medical Sciences, New Delhi, some years ago and shifted base to Kukshi, his hometown in Dhar district. JAYS, the organization he founded, came to limelight when its candidates swept the college student unions polls in Adivasi-dominated Dhar, Jhabua, Alirajpur and Barwani districts. From July, it started taking out rallies in the Adivasi-dominated areas, which drew massive response, forcing both the BJP and the Congress to sit up and take notice. JAYS, clearly, had emerged as a force to reckon with in the 22 Adivasi constituencies in the Malwa-Nimar region. The Congress could win only five of them last time.

A desperate Congress tried to strike an alliance with JAYS but the talks broke down as the Adivasi outfit was demanding Kukshi seat for itself, which was won by the Congress in the last polls. Subsequently, Alawa declared that JAYS would go it alone and contest all the 47 constituencies reserved for the Adivasis, besides 30 others which have a sizeable Adivasi presence.

How the Congress persuaded Alawa to jump on its bandwagon is difficult to guess but he meekly accepted the Congress nomination and JAYS ceased to be a force.

Earlier, the Gondwana Gantantra Party (GGP) had emerged as a Adivasi outfit in the state but it soon splintered into many small groups. Its vote share was just 1.8 per cent. Aam Aadmi Party (AAP) also failed to strike a chord with the voters and none of its candidates could get even 10,000 votes.

Biggest Adivasi population in the country

Adivasis form 21.1 per cent of the state’s population, ie every fifth resident is an Adivasi. In six districts, Adivasis form more than half of the population. Alirajpur tops the list, with 89 per cent Adivasi residents. Next comes Jhabua (87 per cent), followed by Barwani (70 per cent), Dindori (64 per cent) and Mandla (58 per cent).

Forty-seven of the 230 Assembly constituencies and six of the 29 Lok Sabha constituencies in the state are reserved for Adivasis. In the 2014 General Elections, the BJP had won all the six ST Lok Sabha seats. However, in the by-election in 2015, necessitated by the death of the sitting MP Dileep Singh Bhuria, Congress’ Kantilal Bhuria emerged victorious.

In the 2013 polls, among the 47 ST Assembly constituencies, the BJP had won 32, the Congress 14 and one had gone to an independent candidate. This time, the BJP is down a bit while the Congress has done somewhat better.

Adivasis were strong backers of the Congress at one time but slowly the RSS and its affiliate, the Vanvasi Kalyan Parishad, started making inroads into the Adivasi areas. The saffron brotherhood prefers to call them “Vanvasi” (forest-dwellers) rather than “Adivasi” (original inhabitants) because the latter is in sync with the theory that the Aryans are not the original inhabitants of India and had forayed into the Indian subcontinent from Central Asia by crossing the Hindu Kush mountains.

The Vanvasi Kalyan Ashram launched a vigorous campaign to Hinduize the Adivasis, replacing their gods with Ram and Hanuman and their places of worship with Hindu temples. It was in pursuance of that objective that “Samajik Kumbhs” were organized in the Adivasi areas, where they were treated to a stiff dose of the Ramayana, the Gita and other Hindu scriptures. Those who sermonized the Adivasis included top RSS leaders. 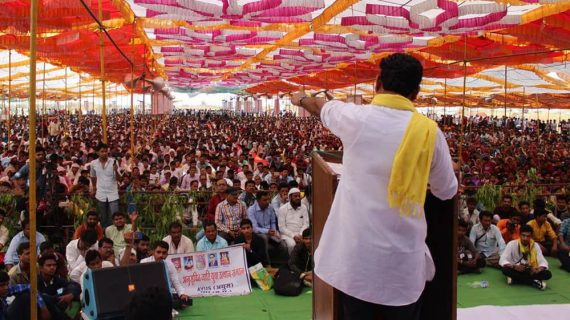 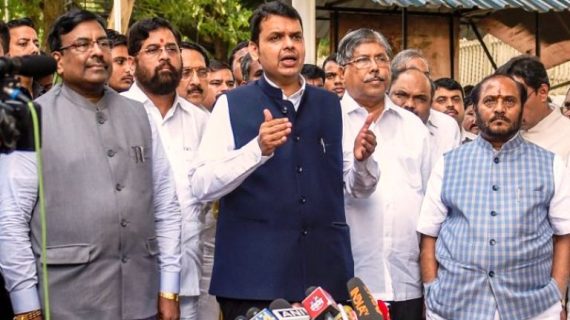