Dr B.R. Ambedkar fought for social justice. He was aware of the injustice suffered by the indigenous people of India who are the makers of the history and destiny of the country. Entrusted with chairmanship of the drafting committee of the Constituent Assembly, he utilized the opportunity to secure social justice to the vast sections of the Indian populace who suffered from multifaceted injustices due to the caste system and communalism. Ambedkar incorporated several measures in the Constitution of India to liberate and empower women and weaker sections of Indian society.

The concept of social justice emerged from an evolution of social norms, order, law and morality across the globe. Social justice is achieved when liberty, equality and fraternity become features of society. According to Rousseau men are equal by nature but the institution of private property has made them unequal and perpetuated inequalities. Communists believe that the source of injustice is the private ownership of the means of production, which creates the classes of the bourgeoisie and the proletariat. 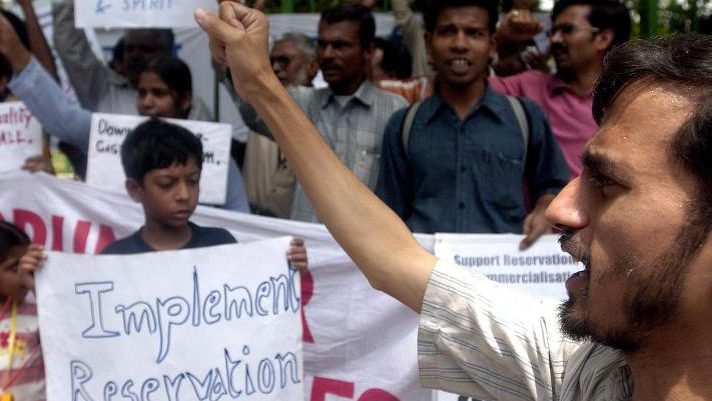 A demonstration demanding implementation of reservations

Social justice demands an end to discrimination on the basis of caste, sex, religion, race or region, and equal distribution of economic goods and opportunities. Social justice is the foundation of democracy. Social, economic and political justice was the ideal for which the Russian revolution (1917) was fought. Ambedkar incorporated several provisions in the draft Constitution, not all of which were ratified, to ensure justice to the deprived sections of Indian society.

Constitutional scholar Granville Austin observes: “probably no other Constitution in the world has provided so much impetus towards changing and rebuilding society for the common good. Social justice is the idea of creating a society or institution that is based on the principles of equality and solidarity, that understands and values human rights, and that recognizes the dignity of every human being.” Here, Austin is talking about the Indian Constitution. The Constitution of India recognizes both social and economic justice as the prerequisites for good governance. 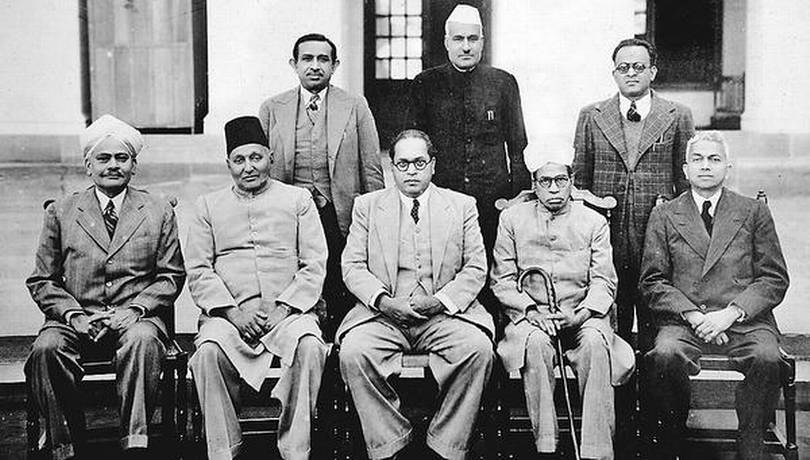 In particular, Article 19(1)(a) of the Constitution of India guarantees to all its citizens the right to freedom of speech and expression. The citizens are free to mobilize the individuals and organizations against social injustice and exploitation.

Articles 23 and 24 provide protection against exploitation. Article 23 prohibits the trafficking of human beings and forced labour. Article 24 prohibits an employer from employing a child below the age of 14 years in any factory or mine or in any other hazardous work.

Chapter IV contains Articles 36 to 51, which are the directive principles of State policy. Article 38 requires that the State make an effort to promote the welfare of the people by securing and protecting as effectively as it may a social order in which justice – social, economic and political – shall inform all the institutions of national life.

Article 39 contains six clauses which emphasize that citizens, men and women equally, have the right to an adequate means to livelihood; ownership and control of material resources of the community should be so distributed as to promote the common good; operation of the economic system should not result in the concentration of wealth and means of production to the common detriment; equal pay for equal work for both men and women; citizens should not be forced by economic necessity to enter vocations unsuited to their age or strength; children should be given opportunities and facilities to develop in a healthy manner and in conditions of freedom and dignity; and childhood and youth should be protected against exploitation and against moral and material abandonment.

Article 41 recognizes every citizen’s right to work, to education and, to public assistance in cases of unemployment, old age, sickness and disablement and in other cases of undeserved want. Article 42 stresses the importance of securing just and humane conditions of work and for maternity relief. Article 43 guarantees a living wage to citizens. Article 46 directs the State to promote the educational and economic interests of Scheduled Castes, Scheduled Tribes and other weaker sections.

Article 15 (1) prohibits discrimination on the grounds of religion, race, caste, sex, or place of birth. It says that the State would be entitled to make special provisions for women and children, and for advancement of any socially and educationally backward classes of citizens, including the socially oppressed sections like the Scheduled Castes and Scheduled Tribes. A similar exception is provided to the principle of equality of opportunity in Article 16, which makes provision for the resolution of appointments or posts in favour of any backward class of citizens which, in the opinion of the State, is not adequately represented in the services under the State.

Article 17 proclaims that untouchability has been abolished and forbids its practice in any form, making it punishable under the law.

This is the code of provisions that paves the way for socio-economic justice in this country.

The Supreme Court of India, ruling in D.S. Nakara vs Union of India, (1983) held that the principal aim of a socialist state is to eliminate inequality in income, status and standard of life. Social justice has become the test for the validity of State actions.

As former chief justice P.B. Gajendragadkar said, “Social justice holds the aims of equal opportunity to every citizen in the matter of social and economic activities and to prevent inequalities.” The concept of social justice has dual objectives of “removing all inequality” and affording equal opportunities for “economic activities of all the citizens”. The core element of social justice is equal social worth requiring that citizens be guaranteed certain social, economic, civil and political rights.

However, Ambedkar had expressed serious concerns about the implementation of the Constitutional provisions for social justice since Indian politics was dominated by socially powerful and economically dominant sections of society. He had called upon Dalits, Backwards, Minorities and other weaker sections of society to capture political power, implement Constitutional provisions and establish social and economic democracy in India (Bohra, 2015:01). He had strongly advocated complementing political independence with social justice and economic democracy.

The rulers of independent India so far have adopted the policy of divide and rule and disintegrated the backward sections of society. Casteist and market forces have controlled political parties, obstructing the delivery of distributive social justice.

A series of progressive mass movements were organized in 1970s and 1980s in India for the rights of farmers, workers, Minorities, Dalits, Adivasis and backward sections of society. Unfortunately, today, the politics of social justice has come to mean electoral victories of a few people hailing from deprived communities. Social justice has been confined to the issue of reservations in government jobs and in government-run institutions of higher learning. At the most, some people demand that reservations should be extended to the private sector. The ruling class is bent upon splitting the struggle of the Bahujan sections into different cells purely for political reasons. The emergence of majoritarianism has led to the social, economic and political domination of the majority over the minority and the undermining of the latter’s culture (Ranjan, 2016). 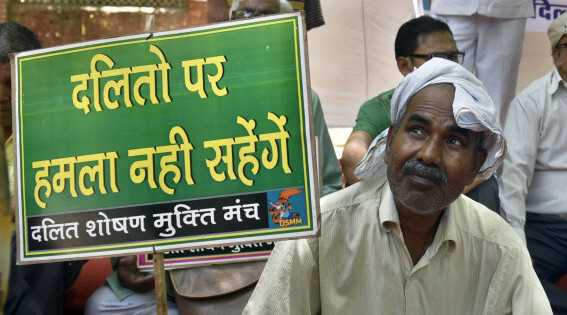 It was Brahmanism that created castes millennia ago. The new economic policy implemented by the government in the 1990s worsened the social and economic conditions (Sharma, 2017: 04). While more reservation was introduced, jobs in the public sector started disappearing due to the policy of disinvestment and expansion of the private sector. The weaker sections of society were the worst victims of economic liberalization. Now, the Rashtriya Swayamsevak Sangh (RSS), the proponents of the caste order, is more politically powerful than ever before and its grip on the government is the strongest yet.

Then there has been interference of the executive in the judiciary as revealed by four judges of the Supreme Court in a press conference in early 2018. Social justice too could become a casualty of such interferences. Thus, the pillars of the Constitution have become weak on account of the threats to secular and socialist character of the Constitution (Vombatkere, 2018:07).

The reservation policy has never been implemented properly by the government due to lack of social commitment and a proactive approach (Thirumavalavan, 2019:06). Now, the government has granted 10 per cent reservation in public employment and institutions of higher learning to the economically weak sections in the general category (the upper castes). The issue of representation of the historically deprived sections of society, the lowered castes, has thus been undermined.

The neglect of the farming sector has affected the farmers deeply. The workers are not given adequate employment benefits in the burgeoning private sector. Absence of a judicial mix of machines and manual labour has resulted in the marginalization of the poor and needy.

Ambedkar is talked about more than ever today, for the mention of the great man can fetch votes. Yet, social justice is missing from the conversations and the policies of the government. It is as if Ambedkar had fought all his life in vain. The last thing he wanted was to be hero-worshipped.

Dr B.P. Mahesh Chandra Guru is professor in the Department of Communication and Journalism, University of Mysore. He is the first Dalit-Buddhist professor of media studies, who, apart from teaching journalism over the past three decades, has held important administrative positions at the state and national levels. He has been a member of both the Karnataka State Service Commission and Union Public Service Commission (UPSC) and has been part of University Grants Commission (UGC) committees. He has published more than ten books in English and Kannada. Prof Guru has been involved in movements and discourses informed by Dalitbahujan consciousness 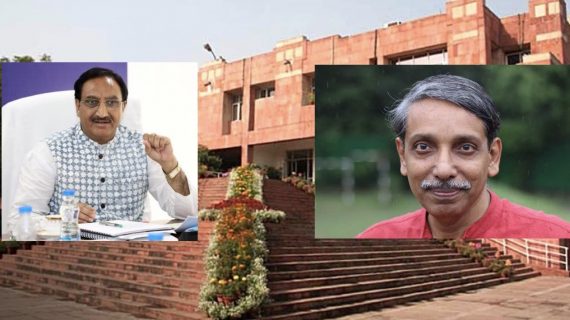 Even Constitutional amendments, laws, judgments and government guidelines haven’t been able to turn the quotas for teachers on paper into reality as the university administration fishes for loopholes and keeps qualified SC, ST and OBC candidates out of the reckoning