There are many people who may not constantly make the newspaper headlines, but their works have a significant influence on today’s sociocultural and political world. This space is for the views on Dalitbahujan issues of such people who work behind the scenes. Here, Prakash Ambedkar, founder and national President of Bharatiya Republican Paksh Bahujan Mahasangh speaks with Kumar Sameer. – Managing Editor

Prakash Ambedkar, the grandson of Dr Bhimrao Ambedkar, is a politician and a lawyer. He is the founder and national president of Bharatiya Republican Paksh Bahujan Mahasangh and has been in the past elected to the Lok Sabha and the Rajya Sabha from Maharashtra. He favours a grand alliance of Dalits and Bahujans. He spoke with Kumar Sameer about how this alliance would affect the upcoming Maharashtra Assembly elections and about the ongoing debate on reservations and landlessness.

Kumar Sameer (KS): In the Lok Sabha elections held this year, the Dalitbahujan unity came apart and that affected the poll outcome. Do you see any hope of them reuniting this year?

Prakash Ambedkar (PA): It is absolutely wrong to say that Dalit-Bahujan unity has come apart. The fact is that every possible effort was made to stall this coming together and these efforts are still continuing. But I can tell you that the dynastic Congress and savarna BJP will not succeed in their endeavour. The Dalitbahujans have understood their conspiracy and the politics of these kinds of parties will not last. They will be forced to shut up shop.

KS: How will this happen when there is great resentment in society against Dalitbahujan leaders. For instance, a section of Dalits has become completely disillusioned with Mayawati in Uttar Pradesh and in Maharashtra resentment is brewing against Ramdas Athawale. In almost all the states, the Dalits are not happy with their present leadership. In these circumstances, do you feel that today’s Dalits want a new leadership?

PA: I am largely in agreement with what you are saying – the Dalit leaders have not risen to the expectations of the people. Instead of working for the welfare of society, they are working for their own welfare and that is bound to anger the people. As for change, it is the law of nature. Whatever doesn’t fit in will be replaced. What the Dalit leaders are facing today is the outcome of their ignoring the concerns of the common people. 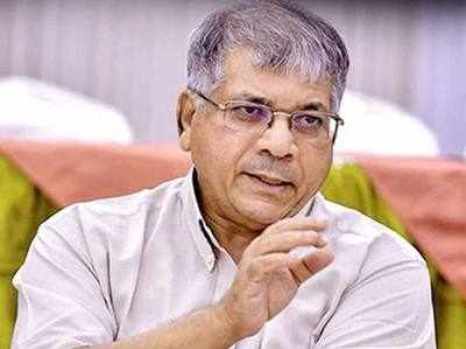 KS: Do you have any new plan with regard to the leadership of Dalits? If yes, can you share its blueprint with us? What are you doing for the Dalits of Maharashtra?

PA: Until the Assembly elections, I have decided to confine myself to Maharashtra. Later, I propose to launch a campaign for uniting the Dalits and the Bahujans of the country. How this will be done and who will partner in the endeavour – we will reveal later. But presently, our focus is on Maharashtra elections. This time, the contest in Maharashtra will be between the BJP-Shiv Sena alliance and the Vanchit Bahujan Aghadi[1]. The NCP-Congress alliance will be wiped out and the Vanchit Bahujan Aghadi is going to do extremely well.

KS: Besides being a politician, you are also a lawyer. In view of the ground reality, do you think reservations are needed in the judicial services?

PA: Reservations should be introduced in the judiciary because the judiciary does not seem to be independent. My grandfather, Dr Bhimrao Ambedkar, was a great votary of judicial independence. He used to say that we should not have a system like in the USA, where the Supreme Court judges are nominated. The collegium system is defective and should be abolished so that the people can continue to have faith in the judiciary.

KS: Your take on caste census?

PA: It should be carried out so that we know what the population of various castes is and how many castes have been wiped out. The fact is that the intellectuals, planners, have not given any place to castes like Sunars, Lohars, Nais, etc in their cost-based economy. The result has been that the livelihood of the members of these castes has come under grave threat. There are 1,930 small castes that seem to have ceased to exist. Caste census would also tell us which castes have been exterminated in the economic revolution. And we have to make sure that if a second economic revolution takes place, it does not lead to extermination of castes.

KS: How do you view the proposal for sub-categorization of OBCs?

PA: Reservations were introduced for non-savarnas for ensuring social justice. But the fact is that OBC has, in itself, become a class. Sub-categorization of the OBCs would be a step in the right direction to ensure that all castes included among the OBCs get opportunities.

KS: Landlessness is a major problem facing the EBCs. Many states, including Bihar, have taken the initiative to provide land to the landless Dalits. Can an initiative be taken at the national level in this regard?

PA: During his term in office, former president K.R. Narayanan had formed the Governors’ Land Record Committee with the objective of finding out the area of government land available in various states. The state governments were reluctant to part with this information and gave all kinds of excuses. The committee submitted its report but it was not made public. The people don’t know what the findings of the committee were. The government has the report. If the government’s motives are clean, it can launch a campaign at the national level for providing land to the needy.

KS: The government’s skill development scheme was an important project that could have enhanced the skill sets of the members of the artisan communities. But the scheme seems to be floundering. Why so?

PA: The fact is that this ambitious scheme is gasping for breath due to the faulty policies of the government. This scheme has only served to accentuate casteism. Under the scheme, members of different castes are given an opportunity to enhance their skills only in their traditional occupations. The government should have given the option to the youth to hone their skills in any field of their choice.

KS: Government jobs are outsourcing jobs. This has led to the members of the reserved categories losing out on potential jobs. What you have to say about it?

PA: This is a conspiracy. The savarnas have feathered their nests through various pay commissions. And when it was going to be the non-savarnas’ turn, the system of contractual appointments was introduced. This allowed the government to avoid equal pay for equal work. It is absolutely wrong and unconstitutional.

KS: Last question. Recent surveys indicate that media is dominated by the so-called upper castes. Do you think that the media – which is often described as the fourth pillar of democracy – should have a representative character and for that, reservation should be introduced in the media, too?

PA: Reservations are not needed everywhere, in every field. This is no panacea to change people’s mindset. We all need to understand this.