The second wave of Covid-19 is on the wane in Delhi but it has already claimed the lives of at least 50 sanitation workers here. Their families are in dire straits. Some families have lost their sole breadwinner. But they have not got any help from the government. The Union and the Delhi governments have been making tall claims in newspapers. Advertisements issued by the Arvind Kejriwal-led government of Delhi clearly said, “The Delhi government is with the families of those who have died due to Covid.” But this assurance has not translated into reality.

Atul, 18, lives in Delhi’s Ambedkar Nagar with his younger sister Vidhi. He had to give up his studies after matriculation due to the poor economic condition of his family. Vidhi is in the 9th grade of a government school. The children have lost their mother to Covid. She was a sanitation worker. She died on 24 April 2021. Atul and Vidhi’s father passed away long ago. Now, there is no one to take care of the children. Atul is working as a manual labourer earning wages that add up to Rs 8,000 a month. He is somehow running the household with that income. 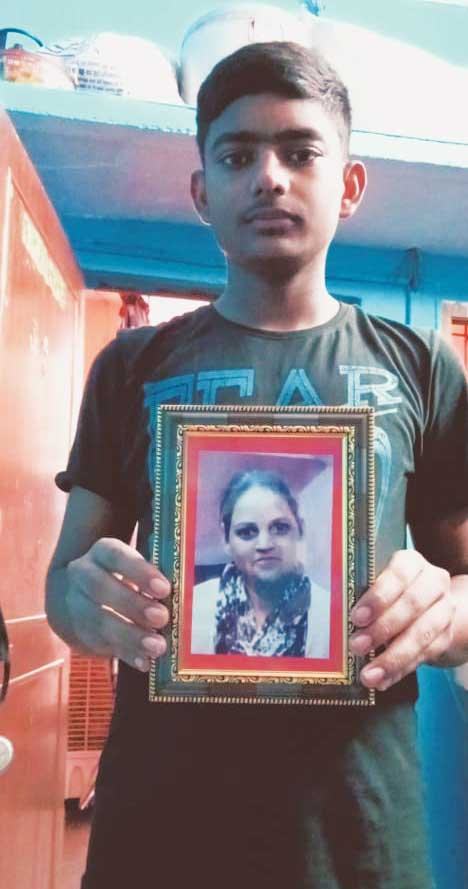 Atul, now saddled with the responsibility of running his household, holding a photo of his mother

Atul’s parents hailed from Dehradun. They settled in Delhi about 20 years ago. Atul and Vidhi were born to Vishal and his wife Nisha in Delhi. Vishal used to work as a sanitation worker. Later, she turned to driving. About seven years ago, he succumbed to diabetes-related complications. After his death, Nisha began working as a help. As she was from the Valmiki community, the only work she was offered was cleaning. She was attending to Covid patients till about four months before her death. She, too, got infected. On 19 April, she was sacked. She visited a neighbourhood doctor, who advised a Coronavirus test. The report came out positive. On 24 April, Atul and Vidhi took her to a nearby hospital after she complained of difficulty in breathing. The doctors pronounced her dead at the hospital.

Babita Devi’s husband succumbed to Covid. She says, “I am 38 years old. I live in Valmiki Basti, Tilak Nagar, New Delhi. I have two children, son Luv (18) and daughter Khushi (16). Luv has cleared 12th grade and Khushi has just been promoted to 12th grade. My husband did housekeeping. He also played musical instruments in a band. I am not educated. I went door to door collecting rubbish. We were somehow pulling on. Then, Dr Renu Chachar of Safaikarmi Andolan came to our Basti for a survey. After meeting her, I joined the Safaikarmi Andolan. Things had started getting a bit better when the second wave of Corona snatched away my husband from me. He died on 22 April 2021. A disaster struck me. It broke me. But I have not given up. My struggle continues.” 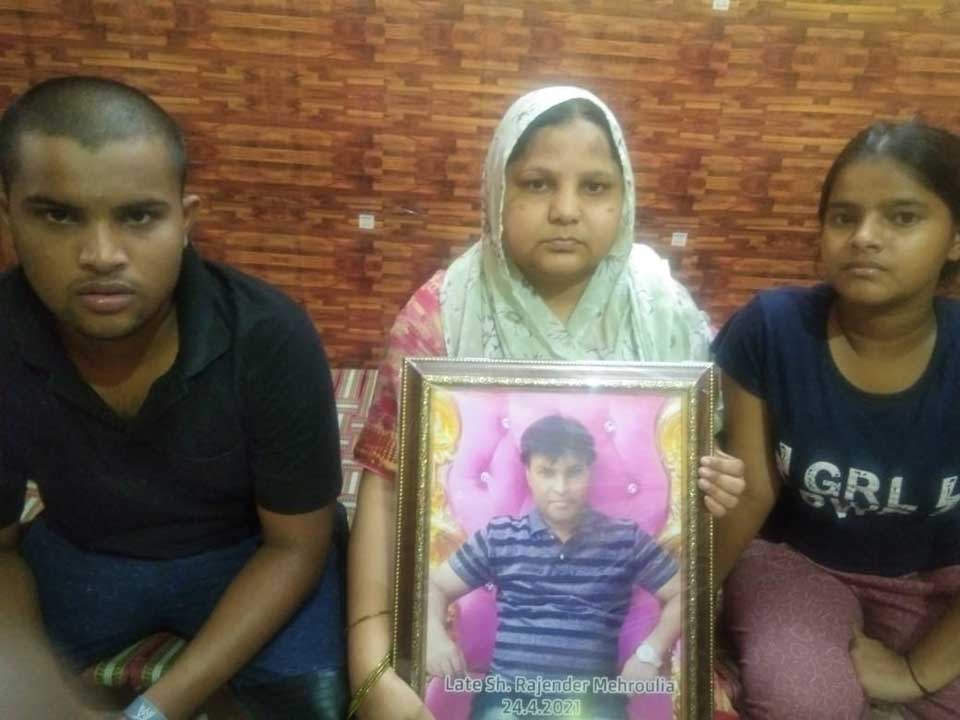 Babita, holding a photo of her late husband, with her children

Dileep Paarcha, a member of the Delhi Municipal Corporation Safai Mazdoor Sangh, said that in Shahdara, 12 sanitation workers have died due to Covid. None of their families has been given any financial assistance or employment. Many sanitation workers and their family members contracted Covid. But no help for their treatment was forthcoming. They feared catching the virus. But they were more fearful of people knowing that we were afflicted with the disease, as that invariably translated into our social boycott. So, people ignored the symptoms and did not go for tests. In Uttar Pradesh, getting tested was very difficult because the government machinery was out to downplay the scale of the epidemic. This affected the sanitation workers. Those who died of Covid did not figure in the government records. 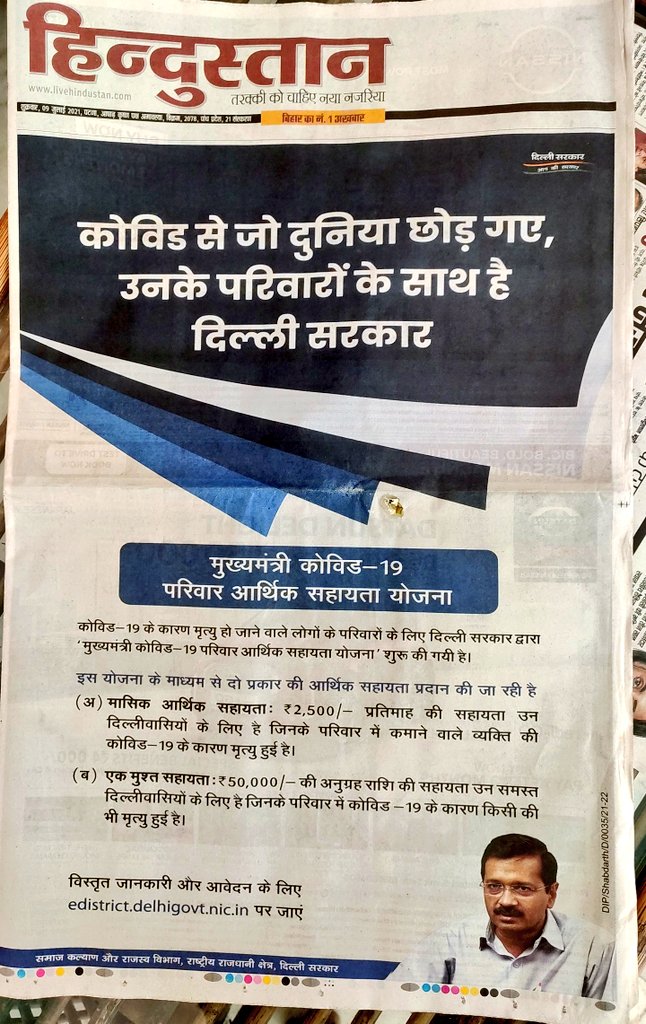 It may be mentioned here that the Delhi government has been releasing an ex gratia of Rs one crore to the families of the doctors who have died due to Covid. It has published huge advertisements in newspapers declaring in bold relief that “The Delhi Government is with the families of those who have died due to Covid.” The ads say that the Government has launched Mukhyamantri Covid-19 Parivar Arthik Sahayata Yojana (Chief Minister’s Covid-19 Family Financial Assistance Scheme). Under the scheme, a monthly assistance of Rs 2,500 is to be given to the families that have lost their breadwinners to Covid. Additionally, a one-time ex gratia of Rs 50,000 is also to be given. But the advertisements have turned out to be just empty rhetoric. There is no one to take care of the families of the sanitation workers who have succumbed to Covid. Is it their fault that they come from communities traditionally engaged in cleaning work? Don’t their lives matter?

Sanitation workers are also citizens of this nation and the Constitution grants all citizens equal rights. The value of their votes is the same as that of other citizens. But the politicians remember them only when they need their votes!

Manisha belonged to a caste that has been subcategorized as ‘Mahadalit’ by the Bharatiya Janata Party, the party in power at the Centre and in Uttar Pradesh. The label ‘Mahadalit’ is not to ensure their development but to alienate them from the Jatavs and the Chamars and to keep them away from the influence of Ambedkarite thinking, writes Kanwal Bharti 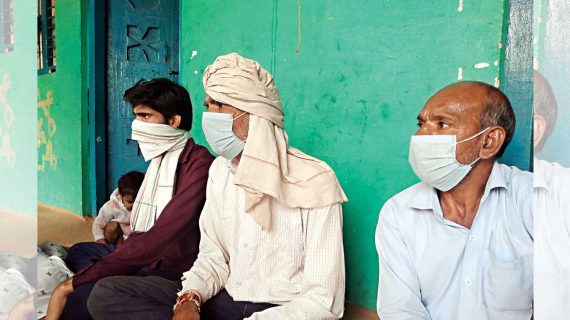 Manisha’s family is still living in fear. When, on October 11 afternoon, the police wanted to take them to Lucknow for a court hearing, they refused. They were afraid of travelling with the police, and being away from home, at night. Nawal Kishore Kumar reports