Prime Minister Narendra Modi often talks of making India a Vishwa Guru. But what some mischievous elements have been doing right under his nose in Gurgaon, neighbouring the national capital, has been sending out a very wrong message to the world. The Gurugram administration has been unwilling to allot space to the Muslims to offer their Friday prayers. It is out of compulsion that the people offer namaz in open spaces. But 20-25 people, with mischievous intent, assemble at such spots. They shout Jai Shri Ram and sing bhajans. For months, the administration has been a mute witness to these unsavoury incidents. Even Haryana Chief Minister Manohar Lal Khattar has recently announced that offering namaz in open spaces “would not be tolerated”.

It is the Khattar government that had renamed Gurgaon as Gurugram. Gurugram is known as a “global city”. The city boasts of corporate offices of scores of Indian and transnational corporations and is dotted with luxury hotels. There is an international airport near the town. What kind of message is this tamasha sending to the world?

Is this the way India will become a Vishwa Guru? Gurugram is spread over 113 sectors. It is administered by the Gurugram Development Authority. Those in the know say that over the past 20 years, 40 new temples, 12 churches and 9 gurdwaras have come up in the town with the permission of the administration. As for the Muslims, a trust was allotted 900 square metres of land in 2004. The construction of a mosque began on this piece of land. But some people kicked up a big row when only the basement had been completed and the construction was stopped. The mosque was supposed to be a four-storied structure. Now, the case is pending in the Supreme Court. Around 150 people can offer namaz in the basement.

There is another mosque at Rajiv Chowk on a piece of Waqf land measuring around an acre. Here, too, some people have objected to the construction of a mosque. The Punjab & Haryana High Court had ruled in favour of the Muslim litigants but the administration, under government’s pressure, has denied permission for further construction.

Gurugram is densely populated. Besides the permanent residents and tenants, thousands of service-class people commute to and from the town every day. A large number of pavement sellers and daily-wage labourers also come to Gurugram to earn their livelihoods. Due to this daily influx, the number of people that want to offer their Friday prayers is large. That is the reason people started offering namaz in open public spaces.

Given a choice, no one would like to pray under the open sky, especially in the peak winter and summer and when it is raining. People offer namaz in the open, amid the biting cold and dust and grime, only out of compulsion. It takes about an hour to complete this religious duty. The employers give them barely an hour’s break from work. So, the namazis at any place are those who work nearby.

Most of these namazis are Pasmanda Muslims. They don’t have two- or four-wheelers. Who wouldn’t like to drive a short distance to offer namaz in an air-conditioned and carpeted mosque? Even a fan above and a mat below will be better than public spaces. But they can’t do it for want of vehicles.

A labourer from Bihar, who works in Gurgaon, told me, “Sir, we are pavement dwellers. We are easy targets for everyone. Who is going to listen to us?” This labourer is also a part-time shayar. Or, you may say that he can think of lines that rhyme. He expressed his sentiments in the following words:

(These tormentors harass the harmless poor. Don’t know what these wicked people want to take revenge for.)

He also sought assurance from me that his name will not be published because the “situation here is not good”.

The labourer is right. It is a fact that poor Pasmanda Muslims are the prime victims of communal riots. It is they who are attacked, killed and burnt alive. The same had happened in the recent riots in Delhi. The victims of mob lynching incidents in the name of Gau Raksha, Ghar Wapsi and against various kinds of “jihads” are also Pasmanda Muslims. The Mewat region of Haryana has emerged as a hotspot of such incidents. It seems the powers that be want to turn the Gurgaon-Mewat region, neighbouring Delhi, into a Hindutva laboratory.

I spoke with Sukhbeer Kataria, a former minister and a resident of Gurgaon. He says that while the mischief of small-time BJP workers can easily be ignored, what is a matter of deep concern is the attitude of the chief minister. Mandeep Shehra, a senior advocate, says that with an eye on the impending elections in Uttar Pradesh, the Bharatiya Janata Party (BJP) is trying to polarize the voters along communal lines. But, he says, Hindus, Muslims, Sikhs and Christians – everyone – can see through the games of the BJP and the stratagem won’t fetch them votes.

Mohammed Adeeb, a former MP, lives in Gurgaon. He says, “In 2017, the local administration allowed namaz at 37 spots in the city. All these spots were away from roads and bazaars. But now, they are not allowing people to offer namaz even at these places. Chief minister Manohar Lal Khattar had himself announced that Muslims could offer namaz at these places. But now he has made a U-turn. It is said that it was at the instance of the Union Home Minister Amit Shah that Khattar publicly took the stand that namaz at open spaces ‘will not be tolerated’.”

Adeeb also said that he would be moving a contempt petition in the Punjab & Haryana High Court against the state government not implementing the court’s judgment in the case of the Rajiv Chowk mosque.

Amid all this, the stand of the local Hindus comes as a breath of fresh air. They have refused to back the hate-mongers. The Muslims have also been dealing with the situation peacefully and patiently. They are not getting worked up. They end their Friday namaz with a prayer that let love prevail between the Hindus and the Muslims. In Modi’s Vishwa Guru India, not only the Muslims, but also Christians, Dalits, farmers, labourers and Adivasis are being deprived of their Constitutional rights.

According to A.C. Michael, national coordinator of Alliance for Defending Freedom, incidents of attacks on churches and assaults on Christians are on the rise in the country. The Christians are being falsely charged with converting Hindus. In the past nine months, 216 such incidents have been reported from all over the country. Hundreds of innocent Christians have been thrown behind bars. What is happening in Karnataka is also a matter of deep concern. “Rule of law no longer prevails in the country. Our Constitutional rights are being trampled upon. In such a situation, we need to join hands and protest in a peaceful manner.” 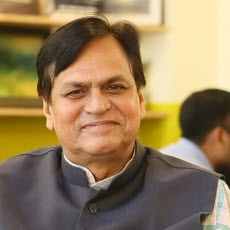