Why is the entire press against the ongoing agitation demanding reservations for backward castes in government jobs in Bihar? Why are all the dwij leaders opposed to it? These are important questions. Until now, the Dwijs led all pro- as well as anti-government agitations and movements in north India. The Dwij leadership opposed as well as supported the government. The agitations and movements were Dwij-versus-Dwij affairs. Coincidentally, for the first time, the leadership of an agitation seeking change in government has slipped out of the hands of the Dwijs. Shudras are leading this agitation. This rankles the Dwijs. They are shocked. They must be thinking “if only we would have been leading this movement”. When it was promised in the election manifesto of the Janata Party, when there was a provision for it in the Constitution, when the Supreme Court had ruled in its favour, reservations were bound to be implemented. When reservations were bound to be implemented, had a movement and a struggle been launched under the leadership of the Dwijs, they would have got another opportunity to grab power and another chance to beguile the non-Dwijs, the Shudras and the backward castes. But a Shudra leadership emerged and things became too hot for them to handle. Now, they don’t know what to do. They are now leading the other side. They have no option except leading the movement against reservations. But they are a bit disappointed that they could not lead the agitation in support of reservations.

This is for the first time that a struggle for power has begun from Bihar and sooner or later, it is going to impact Uttar Pradesh, Madhya Pradesh, Bengal, Rajasthan and Assam. The monopoly of the Dwijs over power is about to end. State power is about to shift into the hands of the non-Dwijs.

The pro-reservation movement is going to lead to several new developments. Only amending the Constitution won’t do. The Constitution will have to be revamped. The present Constitution has been drafted not by an elected but a nominated Constituent Assembly. Barring a few exceptions, all the members of that assembly were from the elite class. Motivated by the values of their class, they must have, knowingly or unknowingly, feared that someday the Dalit castes of the country may rise against the exploitation and oppression and grab state power. That’s why the Constitution was designed in such a way that state power would not slip out of their hands. Even the voice of Mahatma Gandhi, an ardent advocate of decentralization of state and economic power, was ignored. Through the Planning Commission and the officers of the IAS and the IPS, the government in Delhi keeps the states under its thumb. Under the guise of supremacy of Parliament, the Union Cabinet, in fact just one or two or three members, are the real rulers. Sometimes, state power gets concentrated in the hands of a single individual.

The Constitution should be changed to replace the parliamentary system with the presidential system and the head of the government should be directly elected by the people. Once this happens, a person from the exploited, Dalit classes would definitely be elected as the head of the government. That would do some good to the socio-economically exploited classes and the Dalits. The number of Dwijs in the state machinery may get reduced and non-Dwijs may get a bigger share in the governance.

Twenty-six per cent reservations were announced in the Governor’s address to the Bihar Vidhan Sabha recently. This led to the boys of the elite classes indulging in vandalism, stopping trains and buses, forcing closure of colleges and universities, staging demonstrations and taking out processions. This is not at all bad. They will oppose this measure even more bitterly. The pace of mobilization of the exploited and the Dalits will be ten times the increase in the intensity of their protests. Their (Dwij classes) frustration and anger symbolize the labour pains of revolution. The revolution is about to happen. The press of the elite classes wants to create panic and fear in society by talking about civil war, class war and Varna war. We don’t fear civil war or class war. We welcome it. Ultimately, these wars will benefit the exploited and the Dalits. Every civil war basically inverts the present order. Civil wars dethrone the elite classes, end their hegemony over society or state and increase the share of the real stakeholders. So, those who have been the losers so far should not worry. They should welcome whatever is happening.

Why is Jayaprakash Narayan silent? Reservations are being opposed in his name and economic status is being suggested as the basis for giving reservations. Why is he silent when the movement demanding reservations on the basis of socio-educational backwardness has gathered steam? What is the reason? Perhaps he has been numbed. He must be thinking that he has attained the status of a prophet, that he is above the Constitution. If he utters one word, the constitutional provisions, promises made in the election manifesto and the Supreme Court’s judgment will be dumped and the chief minister will acquiesce to his wish. But Mr Karpoori Thakur stood by his commitment and the sentiments of the people and proved that there is nobody above the Constitution and that he is committed to fulfilling the promises made in his party’s manifesto. Any man, no matter how great, cannot be higher than the constitution. Rulers should be loyal to their election manifestos and not to individuals.

Jayaprakash ji is at sea. He doesn’t know what to do. He must have thought that with the help of his Raksha Vahini and other youth organizations he would succeed in browbeating the Bihar government once again and halt the implementation of the 26 per cent reservation quota. But he was daydreaming. The movement of the non-dwijs gained further momentum. It spread to all parts of Bihar. Now, like Bhishma Pitamah, he is maintaining an immoral silence. He should make it clear whether he stands with the Dwijs or the non-Dwijs.

What happened at Gandhi Maidan on 12 March 1978 deserves unequivocal condemnation. Those raising the slogans of “Jayaprakash Zindabad” were also shouting “Jagjivanram Murdabad”. And the same boys rained stones on Jayaprakash.

Had a Dwij been the chief minister of Bihar instead of Mr Karpoori Thakur, such mayhem would not have broken out. Reservations would have been given and the Dwij chief minister would have walked away with the entire credit. 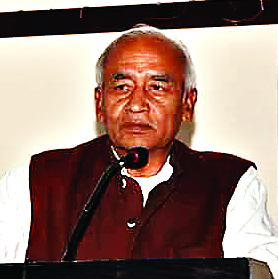