The accompanying illustration shows Mahatma Jotirao Phule – who died in 1890, that is 57 years before India achieved freedom – and Dr B.R Ambedkar, who was part of the National Flag approval committee in July 1947, hoisting the Indian national flag together. It is a picture that brings together the two most creative Shudra/Dalit minds, in their colonial times’ classical self-respecting attire.

They are hoisting the Tricolour (I am deliberately not using the Hindi term ‘Tiranga’) that has a Buddhist Ashoka Chakra at its centre. It was Ambedkar who insisted on the Ashoka Chakra as against Charkha of Gandhi which was proposed by many of his followers in the committee. It appears that Pandit Jawharlal Nehru went with Ambedkar on this. The wheel is a symbol of constant movement of time in developmental progress – a symbol for transporting people and grain from place to place. It is against stagnation of all forms.

The original wheel of King Ashoka was that of a bullock cart, not of a war chariot. Even a modern airplane can’t do without wheels. Without a wheel, at any stage of human history, nothing moves. A wheel is thus integral to the process of continuation of human civilization. The role of the wheel comes to end only with the end of humanity. But a charkha is not such a universal symbol of civilization. The credit for identifying the wheel as this great symbol of civilization and as worthy of a place on our national flag goes solely to Ambedkar.

Cutting to the present, the Congress circulated pictures of Nehru holding the national flag, while the Bharatiya Janata Party (BJP) responded by portraying Narendra Modi as the owner of the flag. In contrast, the flag the Phule-Ambedkar Centre for Philosophy and English Training, Hyderabad, visualized the nation and the flag not in terms of who were or are in power – Nehru and Modi – but in terms of the philosophers and leaders – Phule and Ambedkar – who fought for freedom in its truest sense, that is the complete freedom of the Shudra/Ati-Shudra and Adivasi productive forces. The flag reflects freedom, liberty, equality and fraternity of all Indians. 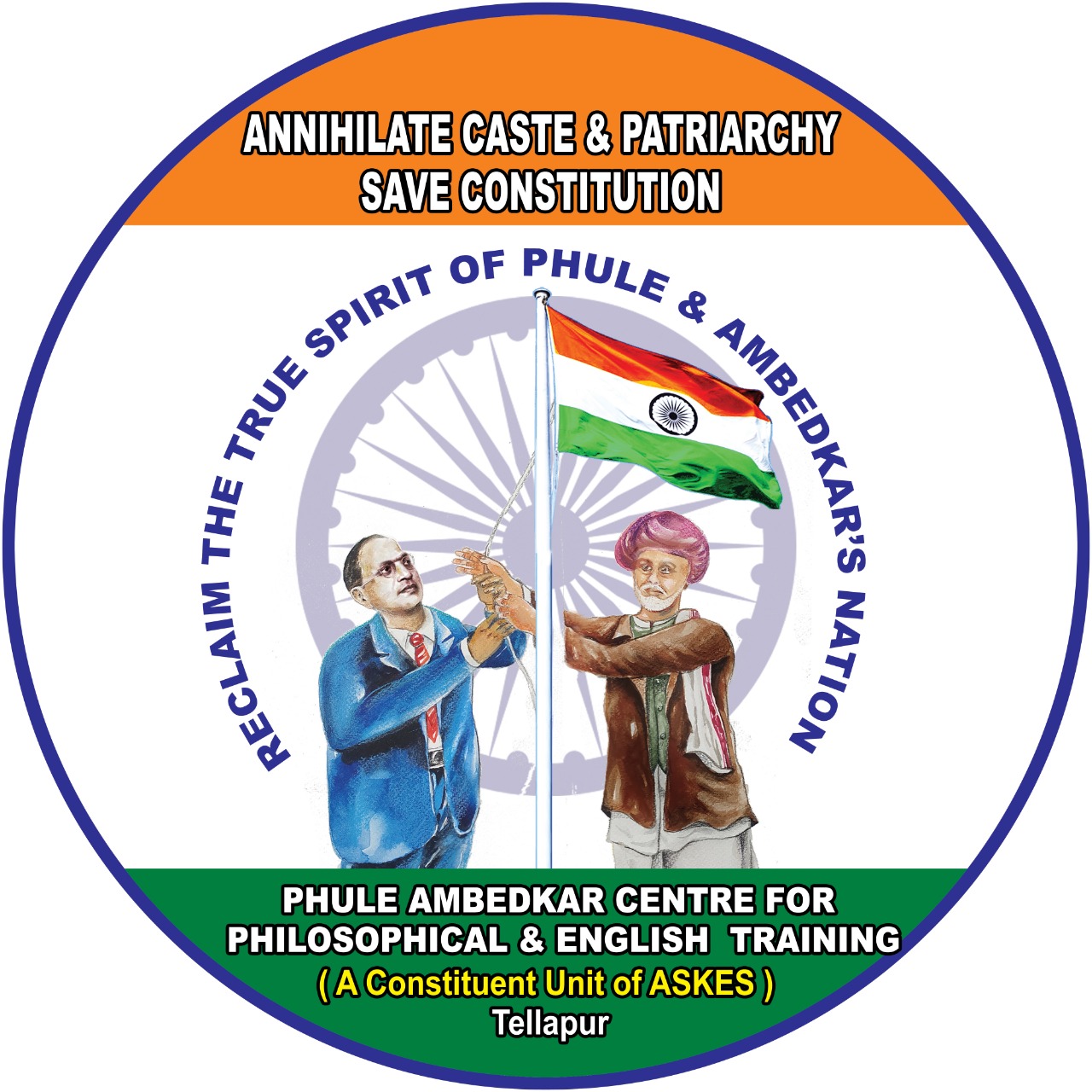 Phule was the first creative Indian thinker and author of the first human-liberative Indian book Gulamgiri (Slavery) and Ambedkar was a philosophical and legal expert who saw to it that those ideals became part of the Constitution and the national flag. He wrote the most powerful books of the freedom movement, “Annihilation of Caste” and of course the Constitution of India. The Rashtriya Swayamsevak Sangh’s second Sarsangsanchalak, who was also its main theoretician, opposed the great liberative principles of liberty, equality and fraternity and the tricolour flag. He condemned them as foreign. He said “Our leaders have set up a new flag for our country. Why did they do so? It is just a case of drifting and imitating. How did this flag come into being? During the French Revolution, the French put up three stripes on their flag to express the triple ideas of ‘equality’, ‘fraternity’ and ‘liberty’. The American Revolution inspired by similar principles took it up with some changes. Three stripes therefore held a sort of fascination for our freedom fighters also. So, it was taken up by the Congress.”

If they were in power in 1947 they would have straightaway adopted Manu Dharma Shastra as the constitution and the saffron flag with the swastika at its centre. India would have entered a civil war, not between Hindus and Muslims but with the Shudra-Dalit-Adivasis on one side and the Dwijas on the other. Mahatma Phule, Shahuji Maharaj, Ambedkar, Periyar Ramasamy Naikar and other Bahujan heroes had prepared the ground for rebellion against forces like the RSS. Now they have accepted the Constitution and the Tricolour. But I am not sure what direction Indian democracy will take by 2047, when the country turns 100.

RSS’s second sarsangchalak M.S. Golwalkar is opposed to liberty, equality and fraternity because the entire brahmanical literature, and the life practice of its proponents right from the days of composing the Rigveda have been against human equality. The Shudra/Dalit/Adivasi forces were not allowed to produce intellectuals to write and build an alternative system.

I am happy that the national flag that Golwalkar opposed as foreign in thought and spirit is being hoisted in every house. This will certainly pique the interest of the younger generations, even in villages and small towns, in its history and evolution.

The Hindutva forces in 1947 opposed the Tricolour – red, white and green with the Ashoka Chakra at its centre – on very communal grounds. The red was considered the colour of the communists, though the communists themselves also opposed the flag as it was seen as the representative flag of the comprador bourgeoisie forces. However, saffron took the place of the red. In my view, the red in the flag represented revolution and change. The white represents peace and harmony. The RSS did not accept that kind of peace outside of the “peace” sustained by the varnadharma. It never accepted that Ashoka was the most respectable ruler, because he became Buddhist, and the Ashoka Chakra in their view represents Buddhism not Brahmanism. Let us not forget that there was no Hinduism during Ashoka’s times. What was in control of civil society that Ashoka disturbed was brahmanical, not Hindu. Let us also not forget that for a long time, the RSS promoted Samudra Gupta as the greatest king of ancient India, not Ashoka.

The green certainly signifies nature, agriculture and production. The 2020-21 historic farmers’ struggle of North India used the national flag because the green in the flag represents the greenery of their crops and the environmentalism of the world.

The Shudra-Dalit-Adivasi masses of India see the freedom, the constitution and national flag as legacies of Mahatma Jotirao Phule, Savitribai Phule, Ambedkar, Periyar, Jaipal Singh Munda and other Bahujan heroes.

The accompanying photo of Phule and Ambedkar jointly hoisting the national flag reflects 75 years of survival of our democracy, and the constitution and the flag they gave us. We take a pledge on this occasion that we will not allow any force on this earth to tear down the present Constitution, the Tricolour and the democratic institutions that we built in this country with our sweat and blood.